PAKISTAN: The Other Side Of World Cup Footballs

KARACHI, Pakistan, Jun 30 2010 (IPS) - England coach Fabio Capello has bemoaned the unpredictable trajectory of the Jabulani World Cup ball, calling it “the worst ball”in the history of the tournament. But labour rights groups have a greater complaint. 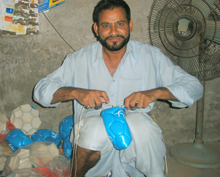 Hand-stitched footballs being put together in Pakistan, which used to supply most of the world's supply of them. Credit: Irfan/IPS

The workers producing the footballs are seeing little improvement in their lives, say labour rights groups, who decry that only a small fraction of the profits trickle down to those toiling away in factories, stitching centres and homes.

Up till the late 1990s, Pakistan was commanding as much as 85 percent of the world’s market in football production, employing a workforce of 85,000 to produce 60 million balls per year worth 210 million U.S. dollars, said a report in English-language daily ‘Express Tribune’.

The South Asian country is now down to just getting between 30 to 40 percent of the world’s orders for footballs.

While Pakistan failed to qualify for the last FIFA World Cup in Germany, it still made its presence felt in every match. The footballs used in the 2006 FIFA World Cup were hand-stitched in Sialkot, a city in the north-east of the Punjab province famous for manufacture of sports goods and surgical instruments.

For the 2010 World Cup in South Africa, however, Adidas decided for the Jabulani footballs – the official match ball — to be machine-made in China.

Arshid Mehmood Mirza, executive director of Bedarie, a non-governmental organisation working for the protection of women’s rights, has been working for the rights of workers in the football trade for over 15 years. “It is unfortunate the Pakistani football industry has not keep pace with the technological advancements,” he lamented.

However, it is the use of child labour that has been cited as the major factor in bringing the football-production industry in Pakistan crumbling down.

In 1996, the world learnt through an exposé in ‘Life’ magazine that Pakistani children were stitching soccer balls for six cents an hour.

Assessments by the International Labour Organisation – International Programme on the Elimination of Child Labour (ILO-IPEC) and the Punjab Labour Department revealed that there were some 7,000 children engaged in soccer manufacturing processes, informed Mirza.

Mortified, the Pakistani government, along with sporting businesses, joined labour and other groups to try to put the house in order and eliminate child labour from the industry. In 1997, a agreement was signed between the ILO, the Sialkot Chamber of Commerce and Industry and United Nations Children’s Fund (UNICEF) to centralise workers and eliminate children from the industry.

“Contracting work to home-based workers did not allow monitoring of child labour, so in 1998, the government in collaboration with the industrialists opened up stitching centres in a bid to phase out home-based work,” recalled Khwaja Zakauddin, former chairman of the Sialkot Chambers of Commerce and Industry and chief executive of Capital Goods Industry. To date, some 130 big industries have joined this programme.

In a report published just before the FIFA World Cup this year, the ILRF unveiled new research that pointed disturbingly to workers being paid about one to two U.S. dollars per ball they stitch. Each ball retails for one hundred dollars or more.

In interviews with 218 workers in seven supply chains in Pakistan, the ILRF found that 70 percent of them were casual workers and “almost all of them were paid below the legally required minimum wage”. The study also pointed to gender-based discrimination, where female home-based workers were paid the least.

Forty-year-old Josephine Francis, a mother of five, is a home-based worker who has been stitching balls for more than 10 years, but has not signed any contract for her employment. She does not know who her employer is, where her wares are sold, and for how much.

Francis is able to stitch four in a day after she has done the housework.

Taslim Bibi’s predicament is no different.

Unlike Francis, she only gets 30 rupees (35 cents) per ball. “The rates vary,” said Bibi. She dares not say anything to the middleman who brings them the business. “He will go elsewhere if we complain too much. There are so many others who will work for less,” she explained.

But some have questioned the ILRF’s report. Ghazanfar Ali Awan, director of the Awan Sporting Goods Industry, claimed that his 450 or so workers are paid a minimum wage of 6,000 rupees (70 dollars) per month with all the benefits including overtime, social security, old age benefits, and health. The few cases of children working, said Awan, were found in un- regularised, small-scale industries that even the ILO would be unable to eliminate.

“A rigorous auditing and monitoring system should be in place for fair wages, rights and entitlements” for all workers, Mirza said.

Along with eliminating child labour and regularising the casual workforce, Pakistan’s football-making industry will have to keep pace with newer technology to make a dent at the next World Cup.

A government-funded Sports Industries Development Centre is soon to open up, says Khwaja. “Once in place (in 2011), we will be in a position to produce over 3,000 balls in eight hours including volleyballs and basketballs,” he said.