BRAZIL: Belo Monte Dam Means Floods for Some, Drought for Others

ALTAMIRA, Brazil, Jul 1 2010 (IPS) - “There will be two years of abundance, and then famine,” says Brazilian indigenous leader José Carlos Arara, laying bare his opinion of the promises that the Belo Monte hydroelectric dam will not alter the living conditions of the people in this part of the eastern Amazon. 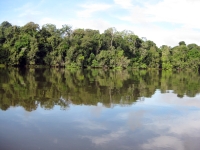 On the Xingú, what look like riverbanks are almost always islands. Credit: Mario Osava/IPS

The giant dam project on the Xingú River will take five years to build and will flood an area 58 percent smaller than originally planned, protecting indigenous territory, says the Brazilian government. The flooded area will be 516 square kilometres, one-fifth the area flooded by the Tucuruí, a hydroelectric dam of similar energy-generating potential built 26 years ago, also in the eastern Amazon.

But the stretch saved from the flooding — 100 kilometres of the Volta Grande (Big Bend) of the Xingú, a horseshoe curve in the river — will suffer the opposite effect: permanent low water levels, because it would lose most of its water retained in a dam and channelled to a second energy-generating reservoir.

Along that stretch live some 180 indigenous peoples in two reserves, the Paquiçamba and the Arara, and hundreds of non-indigenous rural families. The river is their main source of dietary protein and their principal transportation route.

From his village, which some of the local wild animals call home, like a monkey that always rides a “queixada” (a species of wild pig), José Carlos Arara, whose surname is the same as his ethnic group, participates in the anti-Belo Monte movement with other indigenous peoples, environmentalists, social activists and academic researchers.

Reducing the river’s flow would cause a dramatic decline in fish stocks and other sources of food from the river, according to José Carlos, leader of the Arara da Volta Grande indigenous territory, where 96 people live, with 50 more relatives studying or working outside of the community.

The changes in the river’s cycles and flows will cause several species of fish to disappear, warn researchers. Even the environmental authorities that gave the green light to the Belo Monte project admit as much.

There also will be fewer “tracajás,” the Amazonian turtles that are as important as the fish to the local diet. The reproduction of the river turtles relies on the rising river levels that occur in the first half of the year, which flood the nearby forests where they feed and seek refuge.

Vegetation will grow on the beaches that are normally flooded during the rainy season, preventing the turtles from laying their eggs, and the change in water temperature could mean that more males than females are born, which would further hurt reproduction, said biologist Juarez Pezzuti in the Belo Monte Environmental Impact Study.

The turtles practically disappeared from the area around the Tucuruí dam on the Tocantins River, east of the Xingú, said Pezzuti, a researcher at the Federal University of Pará, in northern Brazil. The tracajás were an exception.

The low water volume will also facilitate fishing, which is already the reason that this activity intensifies in the second half of the year, the “summer,” when the river levels in the Amazon drop. With the artificially created “endless summer” of the Volta Grande, overfishing will last year round, said José Carlos.

Depredation amongst species will also intensify, because all of the animals will be more vulnerable to their natural enemies in a narrower and shallower river, with fewer places to hide, he said.

And there is growing competition for food resources as a result of the great influx of migrants, drawn by the possibility of jobs with the Belo Monte megaproject. The dam’s planners say will employ 18,700 people and generate another 80,000 indirect jobs. It is also expected to attract some 100,000 migrants to the surrounding towns, which currently total fewer than 150,000 inhabitants.

Those who don’t get jobs with Belo Monte will try to survive doing other things, like fishing, noted José Carlos, having learned from past experience. Competition for fish resource has been growing since 2005 when the illegal logging industry was shut down and drove up unemployment in Altamira, the largest city in the area.

“The 300 kilos of fish that we used to be able to catch in four days now takes seven or eight days,” he said.

Initially, the easy fishing and hunting will benefit everyone, but the abundance of fish and turtles in the Volta Grande da Xingú will not last more than two years in low water levels, predicted the Arara leader.

This extreme change has generated doubts about the hydroelectric dam’s viability during the driest months.

Because it flows mostly through rocky, flat terrain, the Xingú is very wide and full of islets, which are submerged during the rainy season, particularly through the Volta Grande, where there are also some cascades.

In the dry season, the rocks and cascades make several stretches impassable, even for the “rabetas,” the shallow boats used by the indigenous peoples and other river dwellers here. At those sites the boat has to be carried over land.

“It takes us nine or 10 hours to reach Altamira,” said José Carlos, whose village is about 70 km from the city, downriver. The Xingú is the only route connecting that indigenous territory with the world, and will be lost when the Volta Grande dries up and a barrier is erected at the Sítio Pimental, about halfway between the village and Altamira.

The approved project for the dam promised to mitigate its effects on the Volta Grande, ensuring a minimum flow of water that would vary monthly from 700 to 8,000 cubic metres per second, and between 700 and 4,000 cubic metres in very dry years. The plan is known as “the hydrogram of consensus.”

Critics say it is very little water for ensuring that the river functions as it should, when in the rainy season its average flow is 23,000 cubic metres per second. Furthermore, it is unlikely that those standards will be enforced because energy-generating water and profits are at stake.

Among the 40 conditions that had to be met for the Belo Monte project to be approved, the national environmental authority, IBAMA, required the hydrogram to be tested over the six years prior to the “full capacity” completion of the dam, under “a robust plan for monitoring” the impacts on the Volta Grande, so that problems might be remedied.

Previous mega-dam projects, like Tucuruí, had environmental requirements as well — and they disappeared into oblivion. Now it is a matter of adopting a requirement after the fact.