ALTAMIRA, Brazil, Jul 14 2010 (IPS) - Herculano Porto de Oliveira, of Brazil, said he felt forced “to live in hiding on my own land, though I never fought with anyone or stole anything,” just for making a living from the biodiversity of the Amazon’s Xingú River Basin, where he was born 66 years ago. 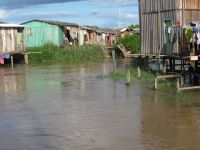 A dozen soldiers sent by the government protected Oliveira and his colleagues for 10 months after they were threatened by gunmen from a company that wanted to expel them and take over the area settled a century ago by these families of “seringueiros” (rubber tappers), who arrived here in the eastern Amazon from the Northeast seeking prosperity in extracting natural latex from the trees.

Oliveira and his friends endured two years of “warnings” — aggression, bribery of local officials, attempted murder — until 2004. At that time, these families isolated in what is known as Terra do Meio (Middle Lands) were able to turn it into the Riozinho do Anfrísio Extractivist Reserve through a decree from President Luiz Inácio Lula da Silva, which ensured them possession of the land and protected their way of life.

The Riozinho do Anfrísio stream flows into the Iriri River, the largest tributary of the Xingú, in the northern Brazilian state of Pará.

“(President) Lula encouraged us by creating the reserve, but now we are discouraged by the Belo Monte,” Oliveira told Tierramérica, referring to the hydroelectric dam that the government approved for construction on the Xingú, making use of an 85-meter drop in the curve of the river known as the Volta Grande (Big Bend).

One of the two reservoirs planned for the project would flood the low-lying areas of Altamira, including the little house that Oliveira acquired two years ago to take in people from the extractive reserve when they need medical attention or other services in this river town of 100,000 people.

The infrequent trips in boat from the reserve to the city take “three days downriver, and four upriver,” and can be as long as eight or 10 days in the dry season, when the river is low and rocks and cascades create obstacles.

The Belo Monte Environmental Impact Study recognises that the reservoir will flood the homes of 16,420 inhabitants of Altamira and another 2,822 living outside the city.

There will be at least 50,000 people forced from their homes, with 30,000 in Altamira alone, says Antonia Melo, coordinator of the Living Xingú Movement, an umbrella of 100 organisations in staunch opposition to hydroelectric dams on this river, which is renowned for its vast social and biological diversity.

In addition to the many plant and animal species that are unique to this area, there are 30 indigenous lands that are home to more than 13,000 people of 24 different ethnicities, and 12 conservation areas, including four extractivist reserves.

A map produced by the non-governmental Socio-Environmental Institute (ISA) shows how the “mosaic” of protected areas serves as a barrier against deforestation of the Amazon advancing from the east and south.

But those defences are threatened, this time from the north, by the Belo Monte dam project and paving of the Trans-Amazonian Highway, and from the south, in the Upper Xingú, where logging has accelerated as ranching, farming and timber interests push back the forest frontier.

Belo Monte represents “the beginning of a new cycle of extinction,” said sociologist André Villas-Bôas, ISA’s Xingú programme coordinator. “Now it is a matter of eating up the river, as well as the forests.”

The hydroelectric dam is “an accomplished fact,” despite the lawsuits attempting to prevent the construction planned over the next five years. But it will also require other dams in the same watershed, due to matters of economic and energy viability, predict Villas-Bôas and other critics.

The Belo Monte will have the capacity to produce 11,233 megawatts of power, but will average just 40 percent of that because the dry season in the Amazon drops the Xingú’s flow to just 1,000 cubic meters per second, compared to 20,000 during the rainy season.

The construction of dams upriver, included in the plans drawn up in the 1980s, would standardise the flow and expand the effective electrical production of Belo Monte.

There is no legal promise limiting the government to this one hydroelectric dam on the Xingú, said Hermes Medeiros, professor of ecology at the Federal University of Pará, in Altamira.

Belo Monte already poses a serious threat to the Xingú’s biodiversity, said the biologist, who participated in a panel discussion of 40 experts who criticised the shortfalls and errors in the Environmental Impact Study that served as the basis for the government’s approval of the project.

The series of two reservoirs and a diversion of the course of the river will not only dramatically reduce the flow along a 100-kilometer stretch of the Volta Grande, with the likely extinction of several species of fish and the decline of others, but will also change the ecology of the entire Xingú River, said Medeiros.

The long curve of the Volta Grande, with its cascades and rapids, serves as a natural barrier to the migration of aquatic fauna because it divides the Xingú into two ecologically distinct parts, he said. That important function will be lost once the locks and floodgates are built.

As a result there will be exchange between the Lower and Middle Xingú. The introduction of foreign species is the cause of a broader process of extinction in aquatic environments, said the expert.

Biodiversity loss is also an economic and social problem because it harms the source of food and income for millions of people in the Amazon, said Juarez Pezzuti, another biologist from the University of Pará, and turtle expert.

The people of Riozinho do Anfrísio and other extractivist reserves make their living from fishing and collecting nuts — andiroba (Carapa guianensis Aublet) and copaiba (Copaifera officinalis) — whose oils are in high demand by the cosmetics industry. Hunting of turtles and other animals is generally for local consumption, according to local resident Oliveira.

Pezzuti stressed that the turtles will also suffer downriver, in the Tabuleiro do Embaubal area, which is known for its high concentration of Amazonian turtle species. Their reproduction will be affected by the changes in water quality and the reduction of riverbank beaches, as sediments will be held back by the reservoirs.