COLOMBIA: ‘Let’s Talk About the Disappeared’

BOGOTÁ, Jul 16 2010 (IPS) - Every day, Luz Marina Hache sees her disappeared husband, Eduardo Lorne, in their 25-year-old son. He sleeps the same way, is equally studious, and like his father, he is infuriated by injustice. He has the same beautiful face that she remembers. 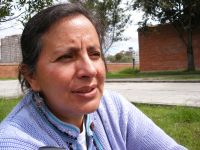 Lorne was “disappeared” – abducted by Colombia’s armed forces – in November 1986. He was a union leader at the state National Paedagogical University of Colombia, and had been in prison for belonging to M-19, a nationalistic armed group which returned to civil society and political life three years later.

Hache, 55, has been working for the Attorney General’s Office (AGO) for the last 17 years. She has a close-up view of the pain of victims of Colombia’s long internal armed conflict: forced disappearances, massacres, extrajudicial executions, displaced families, threats. It seems as though it will never end.

She says this is a revival of her painful memories. “It confirms me in my belief, which is what Eduardo, ‘el Negro’ as I called him, also believed: we have to build a country where there is a place for everyone, where there is respect for other people’s way of thinking, and acceptance of who they are.”

She falls apart when she imagines what would happen if the remains of “el Negro” were to be found.

In June 2009, the Colombian government talked of 27,000 forcibly disappeared persons. In December, the Attorney General's Office announced there were more than 49,000.

The Search Commission, created in 2000 to support investigations into enforced disappearances, has documented 12,830 victims of this crime against humanity. Of these, 159 have been found alive and 280 have been found dead, according to its coordinator, Andrés Peña, speaking at the forum on "Let's All Talk About the Disappeared."


If that ever happens, Hache would be able to stop looking for him. “Being able to bury him, knowing he has a grave with his name on it, that he is no longer an N.N. (no name) and his remains aren’t treated like an animal’s, that would give me peace of mind. And I would tell myself that my struggle has not been in vain,” she said.

“It would allow me to forgive: forgive those who did that to him; forgive all the torturers and killers…” It would give her strength to face each survivor who comes to her office with all the pain of having lost a loved one, and that unanswerable question: “Why me?”

Hache works in the Sex Offenses Unit of the AGO, and is a leader in the National Association of Judicial Branch Employees.

Although she is part of the entity that investigates and prosecutes court cases, Hache is extremely critical of the AGO and the justice system. Only since 2008 have they paid proper attention to what the victims say, she complained.

“I think that came about because of the way the victims challenged the ‘spontaneous declarations’ made in court by the paramilitaries,” said Hache, referring to the voluntary confessions of ultra-rightwing paramilitary groups that made an agreement with the government of President Álvaro Uribe to demobilise.

When the negotiations were completed, the Constitutional Court imposed the condition that only if they told “the whole truth” would the paramilitaries be eligible for reduced sentences of between five and eight years imprisonment for all their crimes.

Victims present at court hearings have the right to question those on trial. According to Hache, “this is what has compelled the state to pay real attention to what the victims feel and say.

“Many prosecutors and judicial investigators have gained awareness of the real situation and have begun to understand, and respect, the pain and grief felt by the victims,” she said.

“But it must also be said that some officials take the perpetrator’s version of events, excusing or justifying his crimes, at face value, and the prosecutor does nothing to prevent this,” Hache said. “There is never any excuse for taking someone’s life.”

Forced disappearance is often linked with appalling treatment, like arbitrary detention and torture.

The rightwing paramilitaries’ plan for mass slaughter, to eradicate all vestiges of social organisation, protest and discontent, with the advantage of taking over the lands belonging to families that were displaced, included the attempt to hide its true extent.

The number of the disappeared is in the tens of thousands, but the statistics are widely inconsistent (see sidebar).

The International Convention for the Protection of All Persons from Enforced Disappearance, adopted by the General Assembly of the United Nations in 2006, is the first international instrument to enshrine the right to truth.

And it has “teeth”: its Committee on Enforced Disappearances has real powers to come to the aid of victims, search for them and support their relatives.

Bogotá announced its ratification of the convention, but only partially. It does not recognise the competence of the Committee, and claims the existing inter-American human rights system has more than sufficient powers to do the job.

This means that the Committee cannot take up any case of disappearance in Colombia, according to the statute. Voices have been raised in recent months, calling for the country to ratify the convention in full.

“The Committee is really necessary. It would be an added instrument against forced disappearances, adding strength to the struggle,” said Andrés Peña of the National Search Committee for Disappeared Persons, at a forum this week titled “Hablemos todos de los desaparecidos” (Let’s All Talk About the Disappeared), organised by the Association of Relatives of the Detained-Disappeared (ASFADDES). The Committee “would be most helpful,” Yanette Bautista, whose sister Nydia Erika disappeared in 1987, told IPS.

The Nydia Erika Bautista Foundation and ASFADDES, among other organisations, launched a campaign on “Víctimas y Derechos, Haz Lo Justo, Hasta Encontrarlos” (Victims and Rights, Do the Right Thing, Until They Are Found) in May 2009 to call for full ratification of the convention.

In April the 2nd World Congress on Psychosocial Work in Exhumation Processes, Forced Disappearance, Justice and Truth was held in Bogotá, attended by 300 delegates from 23 countries in Asia, Africa, the Americas and Europe.

In its final statement, the Psychosocial Congress called on the Colombian government to ratify the convention without exceptions.

Luz Marina Hache believes it is very unlikely that those responsible for the disappearance of “el Negro” will ever be found. But “society in general should make a commitment that there will never again be disappeared persons in Colombia,” she says.

That is precisely what is in doubt, given the government’s rejection of the jurisdiction in Colombia of the Committee on Enforced Disappearances.