SRINAGAR, India, Aug 30 2010 (IPS) - Rasik Rasheed’s (not his real name) hefty Internet bills hardly bother his family. Cooped up at home due to curfews and strikes here for nearly three months now, youngsters like him have been busy not just with their studies but with waging what they call the Kashmir struggle on the Internet. 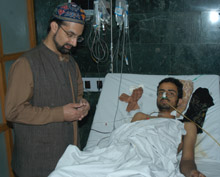 They spend hours uploading and watching videos on YouTube that depict life and the situation under the Indian government’s security regime, and sharing their views and slogans on social networking sites like Facebook.

“I want to contribute to the freedom struggle in my own humble way. How does it matter if I don’t go out and engage Indian security forces in the streets?” he said in an interview with IPS. “I cause them more damage by these videos which depict how ruthlessly they treat Kashmir.”

As for his parents who pay for his Internet fees, “they are happy that I am contributing to the freedom struggle in a different way”, he explained.

The Internet’s reach is pushing young people like Rasik to vary the styles of their resistance against Indian rule in Kashmir.

From an armed rebellion in 1989, the opposition to India’s rule in this restive state is morphing into an ‘ammunition-free’ struggle, one where youth make use of both traditional and more sophisticated, technology-friendly methods of protest such as Facebook, YouTube and Twitter.

In the online world, many operate under names like ‘Dodmut Kashur’ (which means Scalded Kashmiri), ‘Aam Nafar’ (Common Man), ‘Bleeding Paradise’, ‘Quit Kashmir’, and ‘Exiled Stranger’. “Independence Day! Not for us,” read one of the posts on Facebook on India’s Independence Day on Aug. 15.

“It (Internet) is emerging as an alternative media in Kashmir because these youth most often upload videos which depict the suffering of the people, which at times is ignored by the mainstream media, wittingly or unwittingly,” said Sheikh Showkat, who teaches human rights in Kashmir University.

Broadband Internet services were allowed in Kashmir in 2005. “Within no time, these techno-savvy youth figured out how its use can outstrip the traditional media,” Showkat added.

“I think it does help in how people visualise and relate to the information they get about Kashmir,” said Angana Chatterji, a U.S.-based anthropologist who advocates independence for Kashmir at international forums. “I show these videos to participants at international forums, telling them this is what I have seen in Kashmir. It encourages debate and enables discussion.”

Rasik said, “The web teaches you how it can override barriers. The authorities may do gatekeeping to mainstream media, but not here. Such is the power of the web which we are seeking to use effectively.”

Kashmir’s troubles date back to 1947, when Britain granted India independence and the Muslim-dominated areas became part of Pakistan. A U.N. resolution, meantime, gave Kashmiris the option to join either Hindu-dominated India or Pakistan or to become independent. But Kashmiris had no chance to make a choice as their homeland is claimed by both India and Pakistan.

Roughly a third of modern-day Kashmir is administered by Pakistan while the rest is under India. But it is an arrangement that has not been accepted by many Kashmiris, and some youths living on the Indian side rose up in arms in 1989 in an insurgency that simmers to this day.

In more recent years, many Kashmiri youth have been using other forms or protest given that the use of violence has been falling out of favour. In the last two years too, protests here have shifted to street protests and pelting of Indian security officers, rather than the violent acts of earlier years.

“Kashmiris have realised the changing dynamics at the global level, with violent means of protest not getting entertained by the global policy institutions. That is why they are fashioning their struggle accordingly,” said Prof Gul Mohammad Wani, a political commentator who teaches in Kashmir University.

While Rasik is content with what he is doing at home, others combine both protests on the streets and in cyberspace. A youth from uptown Srinagar, who requested anonymity, says he juggles graffiti protests, cyber protests and pelting stones at Indian security forces stationed here.

“I take time for all these activities. The only thing you need is your commitment,” he explained. “We want to convey to the world that it is not only the gun which draws attention.”

Thus far, there have been no arrests for using cyberspace for political activity in Kashmir and no video-sharing or social networking website has been blocked. More than 50,000 Internet connections are said to be working in Kashmir.

Still, Kashmiris ‘e-protesters’ say they cannot risks. “These security agencies do not know about respecting intellectual freedom or freedom of expression. They can pick you up any time if they come to know about your involvement in e-protests,” said one young person who asked to be called Burhan.

But rights activists do not hesitate to use their real names. “Seventy-five days, 64 lives, 57 strike calls, 52 curfews, 200 injured, 1,500 arrests, unarmed Kashmiris versus Indian Armed forces,” wrote Khurrum Parvez, convenor of the Srinagar-based Coalition of Civil Society on his Facebook page on Aug. 29.

(*The Asia Media Forum (http://www.theasiamediaforum.org) is a space for journalists to share insights on issues related to the media and their profession. It is coordinated by IPS Asia-Pacific.)