PORT-LOUIS, Mauritius, Jan 3 2011 (IPS) - “Sex workers rights are human rights”, close to a hundred people shouted during a recent march in Rose-Hill, a major town in Mauritius. Their aim was to sensitise the population, particularly the parliamentarians, to the state of sex workers on the island. 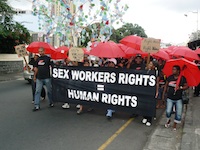 Beaten by their clients and even by police officers, looked down upon by the public and ill treated at hospitals and in other institutions, these women have many doors closed to them.

Sex workers live in every region of the island but those who are bolder stay in the capital and its neighbourhood and operate openly at the Company’s Gardens, a few metres away from the Prime Minister’s Office.

Marie-Ange (full name withheld), a former sex worker, who now works for Chrysalide, an NGO caring for sex-workers for the past six years, relates sex-workers’ experiences of being beaten, being gang-raped and at times not even being paid for the sexual services they provide.

When they call the police, they face being arrested for soliciting men for immoral acts because prostitution is illegal in Mauritius. “I know of many police officers who do not believe sex workers when they report being raped. They say, “You wanted it”, says Marie-Ange.

At the hospital, where services are free, sex-workers are not treated the same as other patients. “Even doctors and nurses stigmatise us. Once a doctor put on several pairs of gloves to examine a sex-worker. Some do not even touch our bodies. Why do they fear us?” the woman asks.

She adds, “No woman is born a sex worker. It happens in life, either by accident or because of poverty – that forces some women into this profession to be able to put food on the table to feed the family.

Any woman can find herself in such a situation but Mauritians are indifferent to the plight of sex-workers”. On the streets, they are looked down upon and spat at.

“So, sex workers also march for their rights now?” asks one man while watching the marchers in the centre of Rose-Hill. “We do not like them. They are bad people, using foul language all the time, smoking and dealing in drugs”, he told IPS.

Dhiren Moher, vice-chairperson of PILS, a local NGO, denounces such attitudes but is mostly critical of the politicians who, he says, do not regard sex workers as part of society. Yet they need their votes at election time.

“It is only when a sex worker or some other under-privileged person dies that they appear with a candle in their hands to march with us on the streets. They are hypocrites”, he told IPS.

Moher’s plan is to register the sex workers, organise them into an NGO and give them a health card so that doctors may follow their health regularly and they can be tested done for sexually transmitted diseases, including HIV. “This is a universal right”, he claims, “as it will not only protect the sex workers but also other people who are presently exposed to the dangers of such diseases”.

The NGO wants to improve the lives of sex workers by first and foremost denouncing the legislation that affects them. Former Attorney-General, lawyer Rama Valayden is working on some propositions on the treatment of sex –workers to submit to the government by February 2011.

According to Valayden, there are several types of prostitution – women selling sex in the streets, gardens or recreational parks, male prostitution, call girls and also massage that proliferate on the island. – and not a single person engaged in this profession is protected against anything, be it violence or sexually transmitted diseases.

He also says that many sex workers want to get out of this business but are unable to as it is almost impossible for them to get a clean certificate of morality that will help them get a job.

“Without such a certificate there is no job for them – either in the public or private sector. They cannot even get a license to trade as hawkers that will allow them earn a living. There is little scope for such women in society”, he says.

Prostitution in Mauritius also includes foreign workers from poor countries like Madagascar, Comoros, Rodrigues and Bangladesh, and even China – who work in the textile and manufacturing industry.

Some of them engage in sex work on a part-time basis to earn extra money to take back home at the end of their stay because they are under-paid. Valayden finds the legislation inadequate to counter sex trafficking and pornography.

“The legislation should be strengthened against trafficking and relaxed in favour of those who need support to get out of this profession”, he says. He also adds that there is a tendency to sympathise with the victims after they have died or been raped or brutally attacked.

“How many times haven’t we seen politicians marching on the streets together with the public with a candle in their hands, carrying posters and banners? If we do that in the beginning, we can protect and save the lives of these people”, Valayden says.

The lawyer says the draft document they will present may shock people but they will encourage the population to read it, check the figures of violence and start discussions, rather than stigmatise sex workers.

“The NGOs will refrain from suggesting the legalisation of prostitution”, says Valayden, “but the time will come to have a debate on this issue.”

“Even if prostitution is illegal, this is not a reason to deprive sex workers of their human rights”, concludes Marlène Ladine from Chrysalide home in Bambous, western Mauritius.