PORTO ALEGRE, Apr 5 2011 (IPS) - In the weeks since a motorist mowed down dozens of cyclists in the southern Brazilian city of Porto Alegre, the incident has becoming a rallying flag in the fight to create a more bike-friendly city. 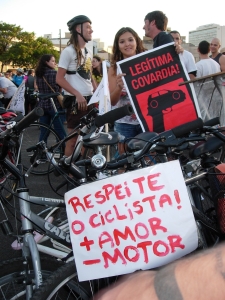 Photos and video footage of the car ploughing through a group of cyclists from the Critical Mass movement on Feb. 25 were seen around the world, sparking demonstrations in numerous countries and a wave of international solidarity.

But local cyclists are even more upset by the city government’s broken promises regarding the implementation of a Bike Lanes Master Plan, drafted in 2009 to promote this cheaper, cleaner and healthier means of transportation.

Cycling activists are now gearing up to voice their views at a public hearing scheduled for Apr. 7.

The city of Porto Alegre has played a vanguard role in environmental policies dating back to the 1970s, and will be one of the 12 host cities for the FIFA football World Cup in 2014.

Proponents of bicycle use stress that the city government could draw on the successful experiences of countries like the Netherlands and Denmark, where large-scale public bike systems have been implemented and welcomed by the public.

Official figures reveal that in all of Brazil, the largest country in South America with a population of over 190 million, there are a mere 4,000 kilometres of lanes designated specifically for bicycles on the country’s roads.

Río de Janeiro, with a population of 6.3 million, has 160 kilometres of bike lanes, while Porto Alegre, the capital of the state of Rio Grande do Sul and home to almost 1.5 million people, has a mere eight kilometres of bike paths for recreational riding, despite its potential for up to 410 kilometres of lanes that would allow bicycles to be used as an alternative means of transportation around the city.

Nearby towns that are much smaller in size offer far better conditions for cyclists. Campo Bom, located 58 kilometres from Porto Alegre, has 30 kilometres of bike lanes and 28,000 bicycles in a population of 65,000 people. In Sapiranga, 52 kilometres away, local industries promote the use of bicycles and have set up special bike parking lots.

“Bike lanes and paths can be created in any city,” says architect Ricardo Corrêa, the founder of TC Urbes Mobilidade e Projetos Urbanos, a specialised consulting firm aimed at “democratising the circulation of all means of transportation.”

Corrêa is getting ready to launch a pilot project involving 30 kilometres of bike lanes in the Santo Amaro district of the southern Brazilian city of São Paulo, an area with 450,000 inhabitants and a floating population of 700,000. If the project is successful, it could be expanded.

“People talk a lot about the bike lanes and public bikes in Europe, but they forget that these things didn’t happen overnight,” Corrêa commented to Tierramérica.

The bike lane network in Berlin is a legacy of the 2006 FIFA World Cup, but even before then, there was already a bike lane plan, he noted.

Meanwhile, according to Shirley Agudo, a U.S. photojournalist and author of the book “Bicycle Mania Holland”, there is nowhere else in the world where bicycling is so ingrained in the culture as it is in the Netherlands.

This country of 16.5 million inhabitants, where bicycles outnumber people, boasts 29,000 kilometres of bike lanes and paths. There are 550,000 bikes in Amsterdam alone, compared to 250,000 cars.

Authorities in other cities have tried to replicate this experience, with mixed success.

English teacher Amélie Dumoulin, 32, lives in Saint-Ouen, a commune located five minutes by bike from Paris, and is a member of Vélorution Île de France, an organisation that promotes non-motorised means of transportation.

For Dumoulin, biking represents an independent means of transportation, which she uses despite the fact that the bike paths in the city of Paris are not adequately connected to those on the city’s outskirts, she told Tierramérica.

According to data gathered by Vélorution, if bicycles were used instead of cars for just 30 percent of trips of less than six kilometres in the European Union, the 27-country bloc could reduce greenhouse gas emissions from automotive transport by four percent.

But bicycles currently account for only three percent of personal transportation in France. “The biggest challenge is to change people’s thinking. Campaigns only talk about safety, which scares cyclists,” said Pierre Fabre, 50, also from France, who has been involved in promoting solidarity with the cyclists run down in Brazil.

Messages of support have also come from Quito, the capital of Ecuador. In this city of two million, the first bike lanes were set up in 2007, and now total 49 kilometres. While bicycles were once only used for tourism, a lot of Quito residents are now actually using them as a means of transportation.

“Quito is laid out in a straight line, which makes it easy to build bike paths,” said Mario Muñoz Carrillo, president of the organisation Biciacción. The only complication would be connecting them with areas south of the capital and the historic central quarter of Quito, designated as a heritage site.

However, he told Tierramérica, the city “has other priorities, like the subway (underground) or the airport. It’s not the same here as it was in Colombia, where mayors were convinced and ordered the construction of bike paths.”

Enrique Peñalosa, the former mayor of the Colombian capital, Bogotá (1998-2000), incorporated bicycles into the city’s daily routine, initiating work on a network of 350 kilometres of special bike paths, while also establishing the Transmilenio express bus system – inspired by a similar system developed in the Brazilian city of Curitiba – and reducing the areas set aside for car parking.

Compared to Bogotá, Porto Alegre has a long way to go. The bike lanes master plan was formulated in 2009, although the matter has been under discussion since the 1970s.

Efforts were stepped up in 1996, when the city authorities began negotiating with the Inter-American Development Bank for the construction of the III Perimetral, a beltway that would connect the north and south of Porto Alegre and help alleviate traffic on the city’s main streets.

Environmentalists and cyclists joined forces and submitted a petition to include special bike lanes in the proposed highway project.

The mayor of Porto Alegre, José Fortunatti, claims that a lack of funds and other priorities have prevented the implementation of the master plan. But city council member Beto Moesch, a former municipal environment secretary, pointed out that in 2010, less than half of the annual budget funds earmarked for sustainable transportation were spent, and an even smaller expenditure in this area is planned for this year.

Some blame this failure to take action on prejudices. “We spurned the use of trains and ferries, and this has led to a monumental number of accidents and deaths on the roads, traffic jams and greenhouse gas emissions,” said city councillor Carlos Todeschini, vice president of the committee responsible for monitoring World Cup-related investments. He believes the international sporting event could be an opportunity for greater progress in the establishment of bike lanes.

On Apr. 7, the city government will be discussing the matter at a public hearing.

In the meantime, Ricardo José Neis, the man who drove into the group of cyclists, is currently in custody and facing 17 charges of attempted murder. One of the cyclists hit by Neis is Renato Soprana Pecoits, a 49-year-old businessman who lost a leg in a motorcycle accident when he was 27. He is able to pedal a bike thanks to a prosthetic leg, and continues riding today.

For him, cycling means an opportunity for contact with other people and with nature in an era when people live so distanced from each other, “locked up inside their cars.”