HAVANA, Apr 19 2011 (IPS) - Accompanied unexpectedly by Fidel Castro, his brother Raúl brought the sixth congress of Cuba’s Communist Party (PCC) to a close Tuesday with a call to “change everything that should be changed,” but without abandoning the socialist path taken on Apr. 16, 1961. 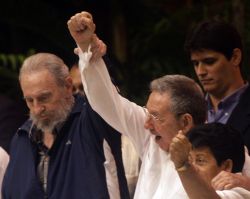 “The congress is over; to work now,” was President Raúl Castro’s closing remark at the end of the four-day congress, in which some 1,000 delegates met in Havana and elected him first secretary of the PCC.

“I assume my last task with the firm conviction and commitment … to defend, preserve and continue perfecting socialism, and never allow the return of the capitalist regime,” he said in his speech.

Castro, who is also chairman of the Council of State, thus made it clear that he would lead what he called a necessary and ongoing process of renewal of leadership, in both the party and the government.

In what he described as an example of “true democracy,” the sixth congress approved the Draft Guidelines for Economic and Social Policy after a months-long process in which a reported 8.9 million Cubans, of a total population of 11.2 million, discussed the document in their places of work and study, leading to modifications and additions.

After the more than three million grassroots meetings held to debate the document, only 94 of the original 291 policy guidelines remained unmodified. The final draft included 313 guidelines.

With respect to the new composition of the PCC Political Bureau and Central Committee, whose members were elected at the congress, there are significant differences between the two.

Changes can be seen in the Central Committee, considered a “first step” towards what Castro described as the gradual process of renewal and generational change in political and government posts.

The election of the 115 members of the Central Committee made progress towards greater representativity in terms of gender and race. The proportion of women on the Committee went from 13 percent to nearly 42 percent, and the percentage of blacks and people of mixed-race heritage grew from 10 to 31 percent.

But the renewal barely affected the Political Bureau. The majority of its 15 new members come from the ranks of long-time leaders of the revolution, including the new second secretary, Vice President José Ramón Machado. And there is only one woman member.

Although Castro did not give the average age, he said a large number of the new members of the Central Committee are young university graduates or skilled workers who have been active in politics and grassroots organising for years.

In addition, 10-year term limits were proposed for senior government positions, to be sent for approval at the next PCC National Conference, scheduled for Jan. 28, 2012.

The phrase “change everything that should be changed,” a revolutionary slogan in Cuba, should also be “the spirit” of the National Conference, which should objectively and critically evaluate the work of the party and determine the transformations necessary for maintaining its leadership in society, Castro said.

“Fidel is Fidel and he does not need any formal post to occupy, forever, an outstanding position in history,” said Raúl, who praised the “first example” given by Fidel when he asked not to be included on the list of candidates for the Central Committee.

The televised images of the closing ceremony of the PCC congress showed the delegates’ surprise at Fidel’s appearance. And equally unexpectedly, he did not take the microphone during Tuesday’s two-hour session.

But his opinions were present, as expressed in several of the columns he has regularly written since he retired from public life due to illness in 2006. “The smaller a country is and the more difficult its circumstances, the greater its obligation to avoid mistakes,” he wrote on Monday.

His previous appearance before that was on Nov. 17, when he met with several dozen students, university officials and leaders of the youth movement, and referred to a 2005 speech he had given at the University of Havana in which he warned that the revolution could destroy itself as a result of its own errors.

Along the same lines, Raúl Castro said the main enemy on the route to the modernisation of Cuba’s economic and social policies, a process officially launched by the congress, would be “our own shortcomings.”

“It’s a question of being alert, with our feet and ears to the ground” to overcome obstacles and errors, and of never forgetting that in a task of such importance for the future of the nation, there is no room for “hasty actions and improvisations,” he added.

Convinced that Cuba is among the small number of countries that have the conditions for transforming its economic model and pulling out of crisis without social traumas, the president also warned that the “updating” of the system would not happen overnight and would involve a great deal of work.

To achieve success, he said, the first thing will be to “overcome a mentality of inertia” in the PCC. He also urged the party to “abandon an inflexibility founded in dogma and empty slogans.”