BRAZIL: Amazon Dams Mean Progress for Some, Lost Livelihoods for Others

PORTO VELHO, Brazil, May 25 2011 (IPS) - The Amazonian town of Mutum-Paraná, in the northern Brazilian state of Rondônia, is disappearing. Its last remaining buildings must be dismantled before it is flooded by the construction of the Jirau hydroelectric dam on the Madeira River. 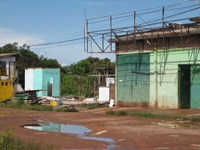 Francislei Araujo da Silva, a part-time resident of Mutum-Paraná, symbolises a local way of life that will also disappear due to the radical and abrupt changes brought by the construction of two hydroelectric dams on the same river just 120 kilometers apart – the Jirau and Santo Antônio dams – in northwestern Brazil.

“I’ve lived in this area since 1989,” Silva told Tierramérica. He earns a living from mining, fishing and gathering Amazonian fruit, such as açaí and cashews, when he is not providing taxi service between cities and towns in western Rondônia.

Mutum-Paraná was founded a century ago during the Amazon rubber boom. Over the last three decades, it has grown alongside the development in the area of “garimpo”, the informal mining of gold and cassiterite, used to make tin. This activity supplied a steady flow of passengers for Silva’s taxi service.

In preparation for the flooding of the area, many of the town’s 2,000 inhabitants were resettled in Nova Mutum (literally, “New Mutum”), a collection of 1,600 homes and public and commercial buildings constructed by Energia Sustentável do Brasil (ESBR), the consortium specifically created to build and operate the Jirau hydroelectric plant. The majority of shares in ESBR are held by the French corporation GDF Suez.

Silva, however, was not recognised as a resident of the town, and was consequently denied the right to choose between monetary compensation and a new house, because during the days when the population was being registered, “I was out of town, driving my taxi in Porto Velho,” the capital of Rondônia, 168 kilometers from Mutum-Paraná.

Silva acknowledges that he did not have a permanent residence in the town, explaining that “sometimes I slept in my car, or in a guesthouse.” But he has gone to court to demand the same compensation as the other inhabitants, because he spent more than 20 years of his life here. He also wants to be compensated for a plot of land he claims to own on the other side of the river which will also be flooded, as well as for the loss of passengers and resulting loss of income from his taxi business.

Once the dam is built and the area is flooded as part of its reservoir, “garimpo” activity will only be possible through the use of new technologies and larger dredges, said Luiz Medeiros da Silva, the ESBR socio-economic director, who is coordinating programmes to compensate the displaced population and miners, promote environmental education, and implement projects that will be left behind as a legacy for the future.

The Jirau and Santo Antônio dams represent technological innovations in Brazil. Their bulb turbines require a smaller water flow volume to operate, which means smaller reservoirs. Some 258 square kilometers will be flooded for the Jirau dam, a small area compared to similar dams, since it will have a power generation capacity of 3,300 to 3,750 megawatts.

Rural displacement to make way for the Jirau dam involved only 316 cases, given the low population density. The majority opted for compensation, while 30 chose resettlement. The Foz do Chapecó hydroelectric plant, which led to the flooding of 79.2 square kilometers in southern Brazil, provoked the displacement of almost 2,500 families, stressed Anderson Imolesi, the head of rural resettlement for Jirau.

Moreover, he commented, the local communities affected on the Madeira River are not typically farming communities, but instead reside on the riverbanks where they make a living from “garimpo” and fishing.

In his view, those who have been assisted by the company could be considered privileged. In addition to a house in Nova Mutum, each family group has been provided with a 15-hectare plot where they can grow crops and a 60-hectare forest reserve where they can gather fruit, in compliance with a legal requirement.

In addition, ESBR is promoting a pilot project that combines fish farming and organic farming and could offer sustainable livelihoods and income for the resettled population.

The project involves the installation of two hectares of tanks to raise tambiqui (Colossoma macropomum), an Amazonian fish species, and eight hectares of garden vegetable, tuber and corn crops, to be watered with fish farm waste water, which is rich in nutrients.

The goal is to produce 20 tons of fish in the first year, 30 tons in the second and 40 tons in the third year, said Olga Torres, a technical specialist from the Pro Natura Institute, which is carrying out the initiative for Jirau. The complex is intended to provide 15 families with an opportunity to increase their income.

The training and project execution, in cycles of six to eight months, will involve the development of a model that could be replicated in other communities, added Torres. In addition, the project participants will carry out reforestation work, concentrating particularly on restoring the vegetation along river banks.

This and other projects are meant to leave behind an economic legacy after the hydroelectric plant is completed and the thousands of jobs in the construction and assembly of the plant have disappeared.

In order for this to happen, a team from the Getulio Vargas Foundation, a higher education and research institution in São Paulo, has been commissioned to design a local development plan. The plan includes the creation of an industrial park next to Nova Mutum, for which land has been set aside, said Medeiros da Silva. A hydro-mechanical equipment manufacturer has already announced plans to set up operations there.

Despite these efforts, however, there is no way of fully mitigating the overwhelming impacts of a megaproject like Jirau in such a vulnerable setting. The simultaneous construction of two hydroelectric plants in such close proximity to one another only serves to aggravate the consequences.

There are “serious indications” that indigenous communities will end up isolated in the area of influence of the dams, a fact that highlighted the need for studies to be conducted prior to execution of the projects, stressed Israel do Vale, general coordinator of the Kanindé Ethno-Environmental Defense Association, based in Porto Velho.

The state of Rondônia is home to 52 indigenous ethnic groups who speak 30 different languages, and are already suffering the impacts of the rapid occupation of their territory by agroindustrial operations, which began in the 1970s. The Jirau dam will specifically impinge on the territories of two ethnic groups, the Karitiana and Karipuna, he said.

“The measures that the companies were required to carry out as prerequisites for execution of the projects, in order to ensure the necessary conditions for the survival of the indigenous communities, were not fulfilled,” he maintained.

The Movement of Dam-Affected People (MAB) has accused ESBR of failing to carry out the necessary dialogue and consultation with local communities for the construction of the Jirau dam, in contrast to the builders of the Santo Antônio dam, who chose the path of negotiation and accepted recommendations on the way to resettle the local population.

Nevertheless, both companies calculate the number of people affected by the dams exclusively on the basis of those directly affected by the flooding of the reservoir, and do not include the population affected by indirect changes, such as the loss of livelihoods and of access to transportation and schools, said Ocelio Muniz, the MAB coordinator in Rondônia.

Muniz estimates that 10,000 families will see their way of life altered in some way by the two hydroelectric plants. The builders of the Santo Antônio dam claim that only 1,621 family groups will be impacted, while ESBR recognises a far smaller number for Jirau.