PORTO ALEGRE, Brazil, May 16 2011 (IPS) - The adoption of a new Forest Code in Brazil could threaten efforts to curb Amazon deforestation, which was reduced 70 percent between 2004 and 2010. 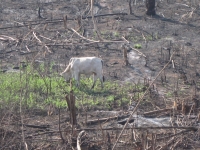 A solitary cow in a slash-and-burn clearing where there was once Amazon rainforest. Credit: Mario Osava/IPS

The proposal to amend the current Forest Code, presented in the Chamber of Deputies by Communist Party of Brazil representative Aldo Rebelo, was to be put to a vote on May 11. After hours of heated debate, the vote was postponed until Monday May 16. But on Monday the entire process was once again put off.

“The proposal opens up a lot of gaps,” Tasso Azevedo, a forestry engineer and Ministry of Environment consultant on forests and climate, told Tierramérica.

In addition to reducing the so-called permanent preservation areas that must be reforested if cleared, it establishes an amnesty for landholders who have illegally cleared forests on their properties. Under the current legislation, they are subject to fines. “This makes it seem as if the law wasn’t made to be obeyed,” said Azevedo.

If this part of the proposal is approved, reforestation would no longer be required on up to 15 million hectares of land, according to the Ministry of Environment.

Under the current Brazilian Forest Code (Law 4771 of 1965), permanent preservation areas are areas that “play a role in preserving water resources, landscape, geological stability, biodiversity, the gene flow of flora and fauna, protecting the soil and ensuring the well-being of human populations.”

These areas include the banks and sources of rivers and the tops and slopes of hills, where logging is strictly prohibited.

Legal reserves are areas within private landholdings deemed by the law to be “vital for the sustainable use of natural resources, conservation and rehabilitation of ecological processes and biodiversity, and the protection of native flora and fauna.”

In the Amazon rainforest region, 80 percent of the forested area on privately owned farmland must be set aside as a legal reserve, and therefore cannot be cleared.

For landholdings located in the Cerrado tropical savanna region within what is known as the “Amazônia Legal” (which covers nine of Brazil’s 26 states), 35 percent of forested land must be preserved, while 20 percent must be set aside as legal reserves in the rest of the country.

But there is no special protection for the rest of the Cerrado, an ecoregion spanning two million kilometers in central Brazil, where the rate of deforestation is twice that of the Amazon.

The Forest Code currently prohibits the clearing of forests on a strip of between 30 and 500 meters along the banks of rivers. Under the proposed changes, that requirement would be reduced to a 15-meter-wide strip. The amendments also open up the possibility of forgiving deforestation fines for landowners who register with the Environmental Regularisation Program, essentially an amnesty program, as well as owners of landholdings of 400 hectares or less, who would not be required to reforest cleared areas.

“The new Forest Code is an umbrella full of holes,” said Azevedo, adding that the bill tabled by Rebelo “is a different bill from the one that had been agreed upon. With a few small changes in wording, for example, mangroves were removed from the protected areas.”

The head of the ruling Workers Party bloc in the Chamber of Deputies, Cândido Vaccarezza, maintained that there would be no flexibility with regard to planting crops in permanent protection areas, and that any exceptions, under the criteria of public utility, social need and reduced environmental impact, would be regulated by decree.

In the meantime, the voluntary targets established by Brazil to reduce its greenhouse gas emissions are also at stake, since deforestation is the country’s main source of these emissions.

A national emissions inventory published in late 2010, but based on data from 2005, states that the country produced 2.2 billion tons of greenhouse gases annually. If the prevailing trends continued, annual emissions would reach 3.2 billion tons by 2020. However, the government pledged that it would reduce its emissions to two billion tons annually by that year.

“The Amazon rainforest is a reservoir of about 100 billion tons of carbon, sequestering more than 10 times the amount of carbon emitted globally each year,” notes the Brazil Low-Carbon Country Case Study, produced in 2010 by the World Bank after two years of research and consultation with scientists and representatives of 10 ministries dealing with sectors like energy, transportation and waste management.

The report proposes strategies to reduce the emission and increase the absorption of carbon, one of the main greenhouse gases contributing to global warming, as well as recommendations on financing mechanisms and public policy.

While the study does not address possible changes to the Forest Code, it does consider the effects of full compliance with the reforestation requirements under the current law.

“When trees are replanted, carbon is sequestered and there are benefits,” the lead author of the study, Christophe de Gouvello, told Tierramérica.

“But when the requirement to reforest is imposed, the area available for farming is reduced, and this leads to the risk that farmers will clear another part of the forest in order to continue planting,” he added. This phenomenon is commonly referred to as “leakage”.

It also proposes that better land use management can be achieved by raising productivity through the promotion of mixed crop and livestock systems and feedlot systems.

Azevedo noted that Brazil went beyond these recommendations with its National Climate Change Policy, adopted in 2009, which foresees a reduction in greenhouse gas emissions of between 36 and 38.9 percent by 2020, depending on whether GDP growth during the interim averages four or six percent a year, respectively.

Geologist Lúcia Ortiz, coordinator of the energy working group of the Brazilian Forum of Non-Governmental Organisations and Social Movements for the Environment and Development, believes the problem of climate change should not be addressed from a business opportunity perspective without challenging structural issues.

The low-carbon agricultural model proposed by the World Bank study “is a strategy for economic growth at the cost of the export of basic agricultural commodities,” she told Tierramérica. In her opinion, what is needed is an agro-ecological approach that encompasses aspects of development and mitigation of the effects of climate change, such as droughts, floods and plagues, rather than solely the control of carbon emissions.

For Azevedo, what is important to understand is that “if Brazil does not become an example and push the rest of the world to reduce their emissions, it will be significantly affected, in addition to not being able to benefit from the transition to a low-carbon economy.”