ANTANANARIVO, May 19 2011 (IPS) - The transitional authorities in Madagascar are struggling to overcome the problem of illegal logging of precious wood. In spite of an April 2010 decree that prohibits the logging, transporting, trading and export of precious woods, felling in the forests is still continuing. 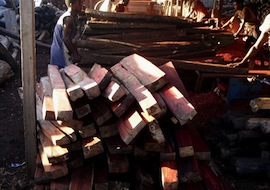 In mid-April, the heads of the police force of Antalaha, a town on the northeastern coast of Madagascar – the area most affected by the phenomenon – seized 30 tonnes of rosewood being transported in two trucks.

But this is far from the only place where trafficking in illegal timber is taking place on this island, which has the biggest rosewood reserves in the world. A few days earlier, three other trucks transporting 115 rosewood logs, were intercepted in Tolagnaro, in the southeast. Before the raid, more than 1,000 pieces of another kind of precious rosewood found in Malagasy forests, were seized in the same region.

In Mahajanga in the northwest, more than 250 containers full of rosewood destined for export have been held at the port since December 2010. Most of this wood comes from Mampikony, an area situated about 250 kilometres southeast of Mahajanga, Ndranto Razakamanarina, a forestry engineer and president of the Voahary Gasy alliance, an umbrella body of civil society organisations working for the protection of the environment, told IPS.

“If no further exports have been officially recorded since the adoption of the decree, in 2009 [when the Malagasy political crisis started] and in the first quarter of 2010, more than 2,600 containers left Malagasy ports: illegal operations are continuing,” said Razakamanarina.

“The logging does not only impact in the northeast, but is spread across the whole country, particularly in the southeast and northwest,” he added. “The poachers continue their illegal activities, hoping to sell their products when timber sales are authorised again.”

Bernard Rakotondrainibe, assistant director general of Madagascar National Parks, says the problem is under control in certain areas, due to the involvement of communities at the grassroots level, such as in Marojejy or Masoala, for example, forests in the east that are on UNESCO’s World Heritage Danger List. “This is not the case in other regions,” he explains to IPS.

At Antalaha, the police force complains of a lack of resources for surveillance. “For a district that covers more than 400 kilometres of forest, there are only 70 monitors,” one police officer told IPS.

The officer also referred to the inadequate legal provisions adding to the difficulty of policing Madgascar’s forests.”We could do better, considering the number of people holding onto the stocks of precious wood, but as the retention of stock is not prohibited in itself, we have to make do with tracking of those involved in transporting or trying to trade [proscribed wood],” he explains.

Another member of the Voahary Gasy alliance, a forester who spoke to IPS on condition of anonymity, points out without the right to take direct action against those illegally harvesting wood, citizens have to go in search of a judicial authority when they encounter poachers. “In the meantime, the poachers have time to escape.”

“Furthermore, some forestry agents are afraid of reprisals and threats,” says Razakamanarina. “[Since 2009] three forestry stations have been set on fire,” namely, in Antalaha, Fenoarivo Atsinanana (in the north-east), and at Ambositra, in the south of the central highlands.

The loopholes in the law have also been exploited by timber operators in the forest region of Boeny, in the Mampikony district and the Mahajanga region, to get authorisation to recover 250 containers being held at the port.

“The ruling only prohibits the export of raw timber, whereas ours has been worked into a finished product,” Liva Rakotojaobelina, president of the group of exporters of Boeny timber, insisted to the press.

But there’s a kind of deadlock between timber operators and customs officials over the definition of the term “finished products”. In terms of the four-sided planed pieces and the slats (horizontal pieces of wood) with pointed tips, the director-general of customs, Vola Dieudonné Razafindramiandra, reasserts that shipping them out is prohibited because these are not end-products, but timber that is still likely to be further worked.

“We need to wait to find out the real quantity of precious wood that we are holding, before deciding what we are going to do with it,” says environmental minister General Herilanto Raveloharison, adding that as long as the decree remains in force, no trade, in whatever form, may take place.

Raveloharison has called on different local authorities to step up the struggle to prevent the trafficking of precious wood.

The justice minister, Christine Razanamahasoa, met with public prosecutors from all jurisdictions of the country to give reinforce instructions to resolutely prosecute trafficking of rosewood.

“Now more than ever,” says Razakamanarina, “the government must show its will to fight this phenomenon if it wants the support of the international community.”

Since the beginning of the political crisis in 2009, Madagascar’s foreign development partners have suspended most of the aid that was earmarked for the preservation of the environment.