MEDIA: Uniting in the Face Of “Unnatural” Disasters

PORT-AU-PRINCE, May 9 2011 (IPS) - “In my opinion, there is no such thing as a natural disaster,” says Sylvia Richardson, a volunteer broadcaster, mother of two, assistant librarian, and the new vice president of the North American region of the World Association of Community Radio Broadcasters (AMARC). 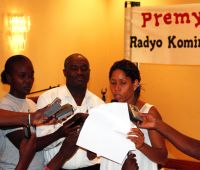 “Poor people are forced to live in conditions that make them vulnerable. The real question is, why do we have this idea that poverty is ‘natural’?” she asked.

Born in El Salvador and now living in Canada, Richardson was speaking at the first-ever Caribbean Conference of Community Radios held in Port-au-Prince, Haiti, the site of what the U.N. has called “the worst disaster in decades”.

The three-day conference’s official topic was “Communication, Vulnerability, Managing Disaster and Climate Change”, but Richardson noted that the high death tolls of Haiti’s recent disasters – the earthquake in which some 230,000 people died, and the subsequent cholera outbreak, which has claimed the lives of almost 5,000 already – were not “natural”.

“Poverty is not natural and permanent. It is not something that just happens to certain people in certain places. We’re made poor by exploitation, by theft. By the theft of our resources, the theft of our labour and the theft of our dignity… when we are told that our lives are only worth what the market will pay,” Richardson told IPS.

Speaking at one of dozens of panels and workshops held over the weekend, Richardson is typical of the community radio members who gathered here to discuss peoples’ right to communicate and the importance of building bridges between radios in the Caribbean and throughout the world.

“When we are the authors of our own stories, when we organise and we mobilise, changes occur,” Richardson said.

The conference was organised by AMARC and a Haitian community radio training and production centre – the Society for the Animation of Social Communications (SAKS), in order to bring together radio broadcasters from a region which still bears many scars of the colonial period – poverty, arbitrarily drawn borders, and numerous languages.

“Here in the Caribbean, we are all in the same boat, facing natural disasters and also facing the disasters that are a result of the exploitation and mismanagement of resources by tiny national and international minorities,” SAKS director Sony Estéus told IPS. “We need to come together.”

And so AMARC’s newly elected board of directiors – hailing from all over the world – joined members of about 25 Haitian community radios and representatives of almost a dozen Caribbean radios and institutions from Jamaica, Trinidad, Dominican Republic, Guadeloupe and Dominica. In formal sessions and over meals, broadcasters and others fighting for the right to communicate shared experiences and stories in four languages: Spanish, English, French and Haitian Creole.

For example, community radio members from Jamaica and India talked about the roles their stations have played during times of disasters like floods and hurricanes, describing how stations became hubs of information and were sometimes the only place where people could charge their mobile phones.

“I was surprised to see photos of Jamaica,” said Anéus Nelson, director of programming for the Haitian station Radyo Soyèt FM (“Radio Poor Peasant FM”), referring to images of houses perched on riverbanks or steep slopes. “They have the same problems we do.”

“We are clearly facing the same issues,” Rosamond Brown of Roots Radio in Kingston, Jamaica, told IPS. “We we also all have challenges with being based on volunteers, problems with training and problems with sustainability.”

Haitian Senator Melius Hyppolite, who represents a region where one of the first community stations was founded, during the 1991-1994 coup d’état, showed up and promised the conference he would work to get the new parliament to pass a law legalising the stations.

“When there are important political events in Haiti and the Caribbean, where do we get information? From the dominant media, from journalists who come from North American and Europe,” PULSAR’s coordinator, Alejandro Linares, told conference attendees on the last day.

“It’s a matter of information autonomy. The language issue makes it difficult but we have to do it, so that others, from outside, are not the ones telling us about our own realities. We need to tell our own stories,” he added.

The conference ended with a joint declaration denouncing the fact that almost 16 months after the earthquake, nearly one million refugees still live in squalid camps where women and children are subject to violence and sexual exploitation.

“We call for transparency and accountability in the use of the resources for the reconstruction of the country and for that, there is need for independent and community media to guarantee that the reconstruction will be inclusive, participatory and have a gender perspective,” the declaration stated.

“The Haitian tragedy highlights the profound inequalities of globalisation that condemn local populations to live in dependency and paternalism,” it added.

Finally, participants called on Haitian judicial authorities to take action against the armed men who burned down a community radio station, coffee cooperative office and community library on May 21.