SAN SALVADOR, Jun 16 2011 (IPS) - Manuel Navarrete fiddles with the buttons and adjusts the volume on the control panel at the Radio Victoria community radio station in northern El Salvador, while he reads over the microphone the latest communiqué in which social organisations express their solidarity with the station’s journalists, who have received death threats. 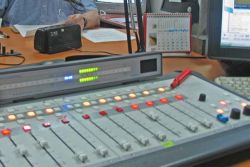 “My parents tell me, ‘son, what are you doing there, you could find another job,’ and these threats make me angry but they also give me strength because you know you’re doing a good job on behalf of the communities,” Navarrete told IPS.

The Radio Victoria staff first received death threats in 2006. The threats started up again in 2009, and this year they have become even more frequent, through telephone calls, emails and letters, from a group that calls itself “Exterminio” (extermination).

The messages warn the reporters to “shut up or you will turn up dead,” although they do not specify what issues the journalists should keep mum about.

The radio station workers believe the threats are aimed at forcing them to modify their editorial line, which is critical of mining in El Salvador, especially the projects headed by Canada’s Pacific Rim Mining Corp in the north-central province of Cabañas.

Pacific Rim El Salvador, the company’s local subsidiary, began to carry out exploration work for the El Dorado gold and silver mine in 2002. But in 2009 the government denied it a mining permit due to the risk that the mine would contaminate the Lempa River, a primary source of drinking water.

Pacific Rim has sued the state for 100 million dollars before the World Bank’s International Centre for the Settlement of Investment Disputes (ICSID) under the U.S.-Central America Free Trade Agreement (CAFTA). Meanwhile, the company’s operations in the country have been suspended.

The radio station itself is located in Cabañas, in the municipality of Victoria, 95 km northwest of San Salvador. It has reported on the local opposition to the mine and the risk of water pollution posed by the use of cyanide to extract gold and silver.

Journalists Pablo Ayala, Maricela Ramos and Navarrete were the most recent targets of the threats, through anonymous letters slipped under the radio station’s door, as well as email messages and phone calls.

“In the messages they insult us, intimidate us, try to limit our freedom of speech by telling us to change the focus of our radio work, and that if we don’t, we have such and such an amount of time to leave or we’ll be killed,” Ramos told IPS during a visit to the radio station in the first week of June.

“They also tell me that they’ll kill my two-year-old daughter,” said the 25-year-old reporter, who three days later fled the country.

Community radio stations began to emerge after the 1980-1992 civil war, as an effort to give a voice to the country’s poorest communities. The stations are also a source of information and news not tied to commercial and political vested interests, unlike so many mainstream media outlets.

Some 20 community radio stations are organised in the Association of Participatory Radio Stations and Programmes of El Salvador (ARPAS), and their broadcasts reach every corner of El Salvador, which is the smallest country in Central America, with a population of 6.7 million.

Besides environmental questions, Radio Victoria’s news agenda includes social issues like human rights and the rights of women and children, along with political questions, which are picking up steam ahead of the 2012 legislative and municipal elections.

Radio Victoria’s critical coverage of some local authorities in the area has also led to suspicion that the threats may also come from political groups that have been denounced by the station.

The police have not provided information about the direction their investigations are taking.

In 2010, the Inter-American Commission on Human Rights (IACHR) ordered the Salvadoran state to provide protection to the station’s installations and to several of the journalists, in a resolution that pointed out that three murders were committed in Cabañas between June and December 2009, in connection with the controversial mining activity in the area.

The first victim was prominent activist Marcelo Rivera, who belonged to the Mesa Nacional contra la Minería Metálica anti-mining group. His body was found in a well several days after he went missing, with clear signs of torture.

The next two activists killed were Ramiro Rivera Gómez (no relation to Marcelo Rivera) and Dora Alicia Sorto, who was eight months pregnant and carrying her two-year-old son when she was gunned down. Both belonged to the Comité Ambiental de Cabañas (Cabañas Environmental Committee) and were killed by hitmen carrying M-16 rifles.

The Radio Victoria station, other media outlets and social organisations believe the three murders were linked to the victims’ activities against the El Dorado mine.

The three activists had previously received death threats demanding that they stop protesting the mining project’s impacts on the environment and human health.

But the police blame the murders of Rivera Gómez and Sorto on family feuds which were a result of divisions between those who support and oppose the El Dorado mine. In July 2010, the police arrested nine suspects in connection with the killings.

The Radio Victoria station has been assigned police guards, but the employees are wary of them.

“We don’t trust the men who are protecting us. The mining company has connections with the local authorities. I don’t trust the local police,” said Ramos, who pointed out that one of the threatening notes was slipped under the door of the station when the police guards were supposedly on duty.

Journalist Óscar Beltrán, the coordinator of the radio station, also mistrusts his round-the-clock police bodyguards. “They keep a log on everything we do during the day, including the people we meet with, and some of them have said to us that if the threats were true, one of the radio station workers would already have been killed,” he told IPS.

The assistant ombudsman for civil and individual rights at El Salvador’s Human Rights Ombudsman’s Office, Gerardo Alegría, told IPS that “if an initial wave of threats against the radio station was not investigated in a timely manner, and the people who ordered and carried out the threats were not found, obviously impunity reigns.

“This has led to repeats of the threats, and more threats to other people,” he argued.

Since the Radio Victoria reporters began to be targeted by threats, the prosecutor general’s office, which is in charge of the investigation, has not issued a single report on where the messages may have come from.

The problems faced by the radio station have awakened both local and international solidarity.

In May, for instance, Reporters Without Borders issued a statement saying: “For nearly a decade, Radio Victoria has been the mouthpiece of local communities and environmental activists opposed to the mining operations of Vancouver-based Pacific Rim Mining Corp. The station has played a key role in providing the local population with information about the dangers that the mining poses to their health and even their survival.”

The Paris-based group went on: “The death squads that claim to be sending these threatening messages have not been disarmed” since the civil war. “The need to step up the investigation is greater than ever because of the danger these threats pose. There also needs to be a broad-based campaign by El Salvador’s political class for the dismantling of these criminal rings, which enjoy complete impunity.”