MAKUENI COUNTY, Kenya, Jun 13 2011 (IPS) - After substituting her maize crop with cassava, Jemima Mueni has enough money to pay school fees for her children and enough food to last until the end of the year, despite the current drought. 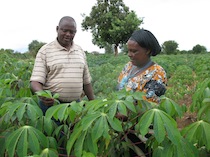 But her homestead neighbours in Wolile Village in Makueni County in semi-arid Eastern Kenya do not have the same surety. Some of them are already living on alms following the recent increase in food prices, amid the drought that was declared a national disaster in June.

Mueni started growing cassava on a larger scale in 2010 after she learnt about its benefits from a self- help group she now belongs to. Although cassava is not a new crop in the region, the members of the Kituluni Farmers Self Help group have re-discovered its value.

“We have learnt how to cook and eat both cassava leaves and tubers, make flour from dried tubers for domestic and commercial consumption, snacks, and crisps from the tubers,” said the mother of seven.

Mueni said she had always known cassava was a drought-resistant crop, but never bothered to grow it.

“Until three years ago it was a stigmatised crop because of a simple retrogressive mentality by local residents; that it is a crop for extremely poor and desperate people,” she said.

As a result of the mentality, people have traditionally grown no more than 10 cassava plants their farms.

Mueni and her husband, Samuel Mukonza, have stopped growing maize for about three seasons in order to concentrate on cassava, which grows all year round. “So far, we have just one acre under cassava, with 540 stems,” said Mukonza.

The couple decided to plant cassava after they failed to harvest a single grain of maize from a five-acre piece of land following a fierce drought in 2010.

According to results from trials in different countries in Africa and abroad, cassava has proven to be a drought-tolerant crop that can survive in severe climatic conditions.

However, the idea of growing the crop for commercial purposes and as a crop for food security in Eastern Kenya was introduced and popularised by the Kenya Agricultural Research Institute (KARI), through a European Union (EU) funded project called Kenya Arid and Semi Arid Land (KASAL) management.

“We selected nine improved cassava varieties from the KARI root and tuber research programme for multiplication, after which more than two million improved cassava planting materials were distributed to the farmers through commercial villages,” said John Wambua, the project’s principal investigator.

(‘Commercial villages’ is a concept initiated by KASAL, and is composed of several existing self-help groups whose members have expressed an interest in cassava farming.) ‘Mbuvo Commercial Village’ is one of the beneficiaries of the ‘cassava commercialisation’ project. The community-based organisation consists of 20 self-help groups, and has a membership of 560, all from Makueni County in Eastern Kenya.

In order to qualify as a member of the group one must have planted the improved cassava on at least a quarter of an acre of land. Members are given access to processing equipment, such as the milling machine donated by the EU. The group sells a kilogramme of cassava flour at just over one dollar to residents, and the demand is still growing.

The group also has a food kiosk at Mbuvi market in Makueni County where they sell foods made from cassava including; chapattis, Ugali (a dough-like meal made with boiling water and flour), crisps and deep-fried tubers. Some of the meals are served with well-prepared vegetables made from tender cassava leaves.

“Selling it as ready-made food gives as three to four times more money – meaning that a kilogramme of the flour converted into food can give up to six dollars and 50 cents,” said Rose Matheka, the group’s production supervisor. According to Wambua, a well-managed improved variety of cassava crop can produce up to 15 tubers per plant over eight months. According to the farmers, one tuber can fetch up to over one dollar if sold in the local market while still raw. It means that a crop of cassava can be sold for 18 dollars, the equivalent to 25 kilograms of maize flour.

Despite the fact that the drought was declared a national disaster in Kenya in June, most cassava farmers, like Sophia Mwende Mutua, are not feeling it.

“Just in the past three seasons since the introduction of the KASAL project, I have been able to offset bills with ease, pay school fees for my three daughters, and I have never lacked food to an extent that I have to go for food aid,” said Mutua, the treasurer of Kee Farmers Self Help Group in Makueni County.

The commercialisation of cassava is also being popularised in other semi-arid parts of the country.