PAKISTAN: Schools Rise From the Rubble

PESHAWAR, Jun 26 2011 (IPS) - Violence in the tribal areas of northwest Pakistan has kept students away from school, in some areas for at least two years. Now, officials are trying to make up for lost time by holding classes even under tents or trees. 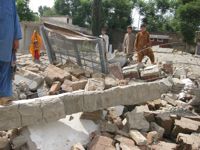 A school bombed by the Taliban. Credit: Ashfaq Yusufzai/IPS.

The 123 students of the Government Primary School in Bezoti village in Orakzai Agency are among thousands who are studying again. “We are overwhelmed to be back in school,” said third grade student Jaweria over the phone from Orakzai. The Taliban bombed her school in August last year, she said, leaving students idle.

Orakzai Agency is one of seven “agencies” or tribal units that constitute Pakistan’s Federally Administered Tribal Areas (FATA). FATA is the war-torn region between Afghanistan and the province of Khyber Pakhtunkhwa (KP) in northwest Pakistan, which has become the base of the Taliban and Al- Qaeda.

Terrorist attacks have left schools in ruins. In Orakzai alone, militants blew up nearly 80 educational institutions, including several schools from primary to high school for boys and girls, and one Degree College for men. Last February, militants destroyed the lone Girls’ Degree College, whose 235 students continue holding classes atop the debris.

“The government is extremely concerned over the disruption (of) the children’s education,” Riaz Khan Masood, political administrator of Orakzai Agency, told IPS. “We have started to make operational 33 government schools by providing 172 makeshift tents in their villages to replace school buildings destroyed due to militancy in the area.”

The move will put some 4,500 students back on track with their schooling, and employ 192 teachers as well.

“The students study under the shade of trees, while they use the tents to store their bags. This is because there is no electricity inside the tents while outside the students enjoy a good atmosphere,” said teacher Shahidullah Khan. At the moment, the students use mats in lieu of school desks, which will be provided in the future, he added.

Khan said the FATA has 5,478 schools and colleges, hundreds of which have been damaged, depriving some 255,000 students of education. The government was forced to shut down another 18 due to violence, leaving more than 300 teachers jobless.

But the damage to schools has not been limited to the FATA. Schools in Swat, one of the 25 districts in Khyber Pakhtunkhwa province, suffered the most damage. “From 2007 to 2009, militants blew up 188 girls’ schools and 97 boys’ schools, which affected more than 390,000 students,” education officer Kameen Khan told IPS from Swat.

In Mohmand Agency, the militants flattened 108 schools affecting almost 90,000 students. The authorities said they have reopened 44 boys’ and 12 girls’ schools in tents, while the rest are being reconstructed.

These government-run schools are the only source of modern education for students in the FATA. They offer classes from the first to the 10th grade, but students have to source their own books and other school materials. Gibran Khan is another beneficiary of the tent school that was established on May 30. “I was sad when our school was destroyed in January this year but now I am happy,” said Khan, a 12-year-old fifth grade student.

Getting students back in school is an urgent need in the FATA, where the literacy rate is 17 percent, as against 44 percent for the rest of Pakistan.

Among the seven agencies, Bajaur has one of the lowest literacy rates, with those for males falling to 12 percent as of March 2011 from 18 percent in 2007 when militancy was at its peak in the region, Masood said.

According to official reports, female enrolment in schools in KP is 3.8 percent and 1.3 percent in the FATA, while nationwide, 22 percent of girls complete primary schooling.

Officials are now offering children incentives to go back to classrooms, although these are, for now, just makeshift affairs. “Now we plan to give school bags and uniforms to talented students. This initiative aims to lure them to complete their education,” political agent Masood said.

“We plan to give prizes to students who perform well in the examinations with a view to encouraging enrolment in schools in the FATA,” said Shaukatullah, a lawmaker from FATA.

“We have launched a programme in which we are going to reconstruct damaged schools. The government of Japan is assisting in rebuilding 80 schools in FATA,” said Ghafoor Khan, education officer of the FATA Secretariat.

“We are rebuilding these schools on an emergency basis because the students have already lost two academic years and now we plan to enable them to catch up with students from the peaceful areas,” Khan told IPS over the telephone.

Reconstruction of all the damaged schools is ongoing; the government has allocated 500,000 dollars for the purpose.

Khyber Pakhtunkhwa Education Minister Sardar Hussain Babak told IPS that all the damaged schools were being rebuilt with financial assistance from international donor organisations. “Until schools are completed, students will be taught in tents,” he said.