SUDAN: The Point of No Return

NAIROBI, Jun 30 2011 - From across the border, they anxiously watch the drama unfold. As their home land of South Sudan prepares itself to split from the Islamic north, fighting continues across the disputed oil-rich areas. During the decades of civil war, almost 400,000 refugees dreamt of the day independence would come. But now it is finally there, many are not ready to go home. 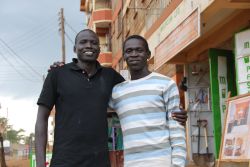 Brothers James and Peter Mabior lost each other during the war, reunited in Nairobi and went back to South Sudan together to vote for independence. Credit: Danielle Batist/SNS

Jacob Meltong was a teenager when he entered Kakuma Refugee Camp in northwest Kenya in 2005. The journey from Aweil in the South Sudanese state of Northern Bahr el Ghazal was long and dangerous.

Although the Comprehensive Peace Agreement (CPA) between North and South Sudan had been signed just months earlier, tensions were still high and many of the roads were scattered with landmines. After days on the road, Jacob had arrived in a foreign country where his parents hoped he would escape the aftermath of the war and get an education. He was hungry, tired, and alone.

He joined almost 50,000 other refugees, many of whom had fled the brutal South Sudanese civil war over the years. Since its establishment in 1992, the camp has expanded to serve refugees from other neighbouring countries like Somalia and Ethiopia.

Although the Meltong family had suffered during the war, fleeing abroad for them was not an option. Only after the signing of the CPA did Jacob’s father consider it safe enough for his son to make the journey south. The parents stayed behind to look after the younger children and elderly relatives.

According to the International Organisation for Migration (IOM)’s 2011 report ‘Migration in Sudan’ between 1.2 and 1.7 million Sudanese fled abroad during the decades of war. Despite the large number of returns following the signing of the peace agreement, 390,000 Sudanese refugees are still living in camps or urban settings in neighbouring countries, in particular Egypt, Chad, Uganda, Kenya and Ethiopia.

Life in the camp was tough for Jacob. He struggled for a year -without any opportunities for schooling or work- before he decided to make the jump and try his luck in Nairobi. He managed to trace down an uncle, who let him stay and helped him to scrape together some money for school fees. Like many South Sudanese, Jacob only started his education as an adult. He is currently in fourth form and is awaiting the results of his final exams.

Together with over 15,000 fellow South Sudanese in Kenya, Jacob made his way to the official Out of Country Voting Centre in January. Crossing the box for separation on the ballot paper was a moment he will never forget. “All these years we have been waiting for this. My family back home and everybody here is waiting for the 9th of July, it is all that is on our minds.”

For James Mabior, 24, Kenya was a safe haven during the last leg of the civil war that ruined his childhood. When fighting became too intense, the family split up and went different ways for safety. James fled across the border to Kakuma. He had told his younger brother Peter to try and flee to the camp as well, but he did not arrive.

James had no way of contacting his brother and thought he might not have survived. Worried, he travelled to Nairobi, where a large community of South Sudanese from his home town had settled in the slums. No one had seen his brother and James received no news in the months following his arrival.

That is – until last year, when a new arrival from Kakuma bumped into James on the street. “He said to me: ‘Hey, are you James? Your brother is looking for you, he is in Kakuma.’ I could not believe it. I didn’t think I would see him again.” Weeks later, the brothers were reunited in Nairobi. They managed to get through to their mother on the phone. She was so overwhelmed that she could not speak.

In early January, James and Peter packed their few belongings and made the journey back home. Peter was amazed at what he saw. When he left South Sudan as a child, the war dominated everything. “There was no tarmac, no food, no buildings. Now, we could see people building. The referendum was very well organised, everything seemed so stable and peaceful. It was amazing to see that together with my brother.”

After meeting their family, James and Peter made their way to the polling station to vote. James’ eyes light up when he recalls the moment: “It was the best day in my life. Next to my people, I felt very strong. We all want independence. We said it to each other as we stood in line: our children will not suffer like we did.”

However hopeful they felt the day they voted, the Mabior brothers soon realised their chances in Kenya are better than in South Sudan. James is currently enrolled in college and Peter is finishing form 3. Their parents have urged them to stay in Kenya until they get their qualifications. It broke Peter’s heart to leave his country for the second time, but deep down he knew his family was right.

“My plan is to get teaching qualifications here and then go back. I want to help to build South Sudan. I know some people don’t want to leave their new lives, but I think that is wrong. All of us who left, whether they are in the U.S., Uganda or Kenya, should come back. Our country needs us.”

The anxiety to return felt by many exiled South Sudanese is not helped by the recent violence in the country. The peaceful referendum leading up to independence was no predictor for the conflict that has started again in the past weeks.

According to the United Nations, more than 360,000 people have been displaced in Sudan over the past six months, and more than half were displaced in the past month alone. The heaviest fighting has been concentrated in the three oil-rich border areas that have been disputed ever since the signing of the north/south peace agreement in 2005: Abyei, Blue Nile and Southern Kordofan.

Across the border states, the northern government has deployed its SAF armed forces. Abyei was a key battleground during the civil war and both sides see it as a symbolic emblem. Most of its citizens want to be part of the south, but they were excluded from voting in the January referendum.

Sudan’s President Omar al-Bashir recently threatened to block a pipeline that exports oil from the south to the harbour in the north. The soon to-be autonomous south relies on oil for 99 per cent of its revenues but is dependent on a pipeline in the north for export.

Khartoum demands that the south continues to share revenues or pays a transit fee on every barrel they export. South Sudan currently splits oil revenues equally with the north – despite producing 80 per cent of output. Abyei is the source of 75 per cent of the country’s 500,000 barrels a day oil production.

Aid workers in Southern Kordofan in the meantime report ethnically targeted attacks, which are largely directed at the African peoples of the Nuba Mountains. Eyewitnesses from local churches and charity groups report intensifying violence and warn of a “new Darfur,” when more than 200,000 people in western Sudan were systematically killed by Khartoum’s forces and at least two million made homeless. As many as 75,000 people have fled the fighting in Southern Kordofan. The U.N. reports that “the security situation continues to deteriorate”.

The violence broke out in early June when the government started to disarm rebels. Although the province will remain part of the north, it is home to many pro-south communities, especially in the Nuba Mountains, some of whom fought with SPLA rebels during the war.

Now they find themselves on the wrong side of the border from former comrades, and have resisted surrendering weapons to the northern forces they see as hostile. Khartoum has said it will not tolerate the existence of two armies within its borders. Nuba activists emphasise this is not a north-south conflict but a battle to protect basic rights and their way of life.

Khartoum banks on the fact that the south is reluctant to challenge the north’s mightier army and risk a war that could threaten independence. This strategy has angered the international community, who are soon to decide on the north’s 38 billion dollars in debt relief.

U.N. peacekeepers in Sudan have been criticised for a lack of response to the recent violence. International aid organisations struggle to get access to the conflict zones. US President Barack Obama urged an immediate ceasefire, but so far, the fighting continues across the border areas.

Back in Nairobi, Jacob Meltong believes that independence will eventually bring longed-for change and development to the country. At the same time he acknowledges there is an enormous job to be done. “People want no more war. What we need are opportunities for work and for schooling.”

He well knows that these opportunities currently are far greater in Kenya and Uganda, where some of his siblings have been stranded, than back in South Sudan. Depending on funding possibilities, he says he might try to get into a college in Nairobi. But -like the Mabior brothers- he says South Sudan will be his end station either way: “I will go back. Home is home.”