AFRICA: The Struggle for Women to Own Land

NAIROBI, Jul 14 2011 (IPS) - Even at the best of times, obtaining a title deed from the ministry of lands is a difficult process. But as the minister of lands admitted on Jul. 13 that his office is rife with corruption, the disorganisation of this office means Kenyan women are no closer to owning land. 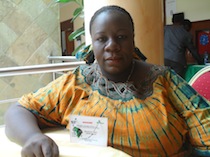 The economy of most African countries depends on women who are deprived of the right to own land says Mwanahamisi Salimu, from Oxfam, Tanzania. Credit: Miriam Gathigah/IPS

“It has become impossible to reclaim illegally-acquired land as powerful individuals collude with corrupt officials in my ministry to acquire illegal title deeds,” said James Orengo, the lands minister.

But, right’s experts say, Orengo should have addressed corruption a long time ago and it only delays women’s access to land.

“It was very progressive for the minister to admit that corruption is rife in the ministry. But that has a negative impact on the struggle to have more women own land. Fighting corruption will take centre stage while land ownership for women will seem like a non-issue,” said Grace Gakii, a gender expert in Nairobi.

“The ministry should have already moved forward to address other key issues such as women and land ownership. Already the constitution states that women too can own land and even inherit, but unless the ministry throws its weight behind the clause, the number of women owning title deeds will not improve,” said a source from the non-governmental G10 alliance, a coalition of 10 women organisations who campaign for gender-sensitive policies, particularly through land decentralisation

The situation is worse for poor women who lack the economic muscle to fight for land ownership against a backdrop of gender-insensitive customary laws that continue to sideline them. Consequently, women still hold a negligible percentage of land title deeds. In Kenya, only a paltry three percent of women have land title deeds and in Tanzania only one percent own land.

“The economy of most African countries depends on women who are deprived of the right to own land. They toil all day on land that they have negligible control over. They sustain the breadbasket regions of many countries that are dependent on agriculture but their labour is unacknowledged and poorly remunerated,” says Mwanahamisi Salimu, from Oxfam, Tanzania.

According to Elizabeth Nzioki, who has conducted research on women and land in Kenya: “A key development in Kenya land tenure reform was the issuing of title deeds in the name of the “head of the family”. The problem with the legislation is that the titled land is being transferred almost exclusively to male individuals.”

The situation becomes very complicated when a married couple separates because in Kenya, the Marriage and Property Act is silent on how land should be divided under these circumstances. In a separation or divorce, because title deeds are in a man’s name, he is usually awarded ownership of the property.

“In Tanzania the situation is not any different, with only about one percent of women with title deeds. It means that the rest of the female population, who form the bulk of the labour force in agriculture, break their backs but have no say in proceeds from the farm,” Salimu expounds.

She further says that the situation is worse among conservative tribes such as the Chagga who reside in the Kilimanjaro region in Tanzania. Among the Chagga land is only exclusively allocated to men and this has grave cultural implications.

“A piece of land is also a burial place. If a woman dies unmarried she is buried in the public cemetery, which basically means she will be ‘forgotten’. (It is) a possibility that most Chagga women will do anything to avoid, including getting married for it and withstanding unimaginable levels of abuse from their husbands,” Salimu says. For the Chagga, being ‘forgotten’ in death is akin to being buried like an animal, and people who are buried in public cemeteries are perceived as outcasts.

But even in countries where the number of women who own title deeds is high, like Zimbabwe, the situation is not ideal.

“In Zimbabwe where 20 percent of women own land, women rarely profit from it. One needs capital to earn money from land,” explains Elizabeth Mpofu the chairperson of the Zimbabwe Small Organic Farmers’ Forum (SOFF).

Across Africa, there are highly progressive statutory laws that allow individuals, including women, to own and profit from land. However, traditional practices and laws override them.

“Traditional laws rule, especially in countries like Malawi and Tanzania where the greatest percent of land, as high as 80 percent in Malawi, is owned communally,” explains Maggie Banda, a lawyer with the Women’s Legal Resources Centre in Malawi.

In Kenya women with no male children are traditionally barred from owning land, as was the case with Miriam Njoki.

“A woman owns land through her male children. Giving birth to six girls and no boy was like an abomination among my in-laws and I was subjected to insults and ridicule. My husband left me for another woman and my girls got nothing from his three acres (over one hectare),” Njoki says.

Although there are a vast number of cultural reasons that have continued to bar African women from controlling and profiting from land, women are no longer accepting harmful traditional practices and attitudes as the norm. In Kenya, the concept of ‘Chama’ has revolutionarised the financial situation of thousands of women. Chamas are group saving schemes where women save money to buy land for members.

“Through this strategy, I now have half an acre (about 2,000 square metres),” explains Njoki.

In Zimbabwe, women have joined the SOFF and use affordable organic inputs, which allow them to make a profit.

“We use indigenous seeds, manure, anthills and so on. In fact, we are now at a point where we are developing indigenous seed banks for sale. We will also soon begin selling other organic inputs, such as anthills, to make money,” Mpofu explains.

In Tanzania, there are extensive campaigns with various stakeholders to ensure that all women, especially in rural areas, are aware of their right to own land. “These women are slowly exploiting various means of controlling land by negotiating with their partners for more say,” Salimu says.

In Malawi, women are working in groups and together are able to control and profit from land by leasing the land or owning it.

Of course these strategies pose various challenges. “Management is an issue because most of the members do not understand the concept of running a farm like a business. They have grown used to running a farm as if it were just a way of life; tilling, attending to the crops and harvesting without thinking of money matters because the men handle that aspect,” Banda says.