UNITED NATIONS, Jul 25 2011 (IPS) - International donors have given more than one billion dollars to ease the famine in Somalia and elsewhere in the Horn of Africa, but U.N. officials say another billion will be needed to prevent the situation from deteriorating in other areas. 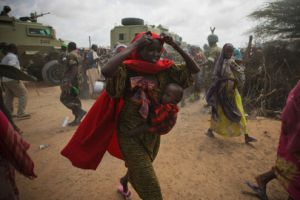 Somali women rush to a feeding centre after the soldiers of the Transitional Federal Government cannot contain the crowd in Badbado, an IDP camp. Credit: UN Photo/Stuart Price

“The crisis in the East of Africa could be spiraling into a larger catastrophe,” Francis Kennedy, a spokesperson for the U.N. World Food Programme (WFP), told IPS.

Tens of thousands are believed to have died already.

The disaster is a product of high food prices, conflict and prolonged drought. It is currently affecting nearly 12 million people in six countries – Djibouti, Ethiopia, Kenya, Somalia, Sudan and Uganda.

On Monday, the U.N. announced that it will begin airlifting food to the Somali capital of Mogadishu, where the weak government is still in control thanks to help from African Union peacekeeping forces.

Valerie Amos, the U.N. Emergency Relief Coordinator, said over the weekend, “I am extremely concerned that if humanitarian agencies cannot intervene now, famine conditions will spread to the whole of southern Somalia within two months.”

The World Bank has announced a pledge of 500 million dollars in aid. Most of the money will go to long-term projects to help farmers, while 12 million dollars will be for immediate aid to those hit by the drought.

Refugee influxes from Somalia into Kenya and Ethiopia continue, with approximately 3,500 people arriving each day, the U.N. reported Monday.

Last week, the U.N. declared a state of famine in the southern Bakool and Lower Shabelle regions of southern Somalia, which are controlled by insurgent groups that have hindered humanitarian aid.

WFP is considering food drops to parts of Somalia, although it is uncertain how much of the aid will get to the people and how much will end up in the hands of the terrorist group Al Shabaab, pirates or other gunmen.

This was a major problem when aid agencies were trying to tackle the drought of 1992-93 in the country.

“The vast majority of people in insurgent-controlled areas of Somalia may starve to death unless aid reaches them in the next few weeks,” the deputy prime minister of Somalia, Mohammed Ibrahim, said at an emergency summit in Rome this week.

Another pledging conference is scheduled in two days time in Nairobi.

Kennedy told IPS that the WFP is among the aid agencies to be banned from areas of southern Somalia by Al Shabaab.

“We have not been in these regions since early 2010 when Al Shabaab began making their threats,” she explained. “It is vital to get to these areas because they are the center of the crisis. Dialogue has been opened to hopefully secure a presence in the region.”

“In the meantime we are working on the borders of the insurgent- controlled regions, providing tents and foods and generally operating in the windows of spaces that we can. Although this may be risky, it is important that we are at the very least near the area.”

UNICEF, however, has been allowed to continue working in these areas.

Shantha Blomen, a spokesperson for the U.N. children’s agency, told IPS, “No, we are not banned. We have been in the region since 1971. However, it hasn’t been easy but we got enough supplies into the areas this month. ”

“Nevertheless, we managed to supply food to over 66,000 malnourished children. We now plan to scale this up to 240,000 over the next month,” she said.

Asked how much damage has been done due to the world’s slow response – USAID’s Famine Relief Warning System Network saw the crisis coming last year, for example – Kennedy of WFP told IPS, “We gave warning back in April that factors were falling into place and some did respond but not enough.”

“Many governments and NGOs [non-governmental organisations] have now come forward but this needs to not only continue but increase if the crisis is to be tackled effectively,” she said.

Even if the normal October rains arrive in the Horn of Africa, this will not mean the factors that caused the crisis should be forgotten or that the food crisis will pass, experts stress.

Much of the livestock in Somalia has long since died, devastating traditional livelihoods in the region. And when animals die, they note, people die.