SANTIAGO, Jul 1 2011 (IPS) - “Today we need structural changes; we need to move towards a new model of education in Chile and to sit down to talks that include all of the concerned parties,” said Camila Vallejo, one of the leaders of the student movement that has the right-wing government of Sebastián Piñera up against the wall. 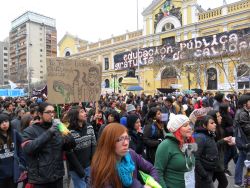 The conflict over education broke out once again in mid-June, with occupations of public schools and universities and street protests, to which the government has responded with harsh crackdowns.

The authorities “are using any tool at all to discredit and divide the student movement,” Vallejo, president of the Federation of University Students of Chile (FECH) and spokeswoman for the Confederation of Chilean Students (CONFECH), told IPS.

The crisis in Chile’s educational system is no longer an issue affecting only students, as seen Thursday when more than 200,000 secondary school and university students, teachers, professors and representatives of more than 100 social, cultural, political and labour organisations marched down the main avenue in the capital, while thousands of people demonstrated in other cities around the country.

Two days earlier, Education Minister Joaquín Lavín had announced that the two-week winter vacation would be moved forward so the students on strike would miss holidays “but not classroom time” – a measure that was interpreted by the students as an attempt to intimidate them and weaken support for the movement.

The discontent over an educational system that deepens inequality has been growing for years. The movement is demanding structural reforms, and the students argue that these would require a new constitution, to replace the one imposed by the dictatorship of the late Augusto Pinochet (1973-1990), which is still in effect although it has undergone a few changes.

“Today our political institutions aren’t measuring up to this challenge; democracy in Chile is widely questioned, and a large majority of people are demanding respect for a right (to quality education for all) and are not being heard,” Vallejo said.

The president of the teachers association, Jaime Fajardo, told IPS that he hoped the government “will pick up on the signals sent out by a citizen movement that is in favour of public education, because today this is no longer just an issue of concern to students.

“This is a broad social movement for public education, and talks are needed, involving all of the concerned parties,” said Fajardo, alluding to the negotiations that the education minister attempted to carry out only with the deans of the country’s public universities, who rejected the offer because it was not supported by the rest of the educational sector.

The government is promoting a new educational reform based on the creation of public schools that would be centres of excellence, higher salaries for teachers, and an increased course load in language and mathematics, to the detriment of history.

The Chilean Observatory of Educational Policies of the University of Chile says the problem is that the underlying issues have not been addressed, either by this government or by the centre-left administrations of the Coalition of Parties for Democracy that governed the country from 1990 to 2010.

“The underlying debate here is of what kind of education system we want, and of the need to redesign the system,” Fajardo said.

In addition, said the director of the Observatory, Jesús Redondo, what is happening now is not only a new outbreak of discontent over the educational system, which also occurred in 2006 when huge numbers of students demonstrated against the government of socialist President Michelle Bachelet (2006-2010), but evidence of a new crisis of the neoliberal model that has subjected education and other rights to the laws of the market.

“The youth express what is happening in society,” Redondo said in a conversation with IPS. “The political class has failed to understand what was happening, they thought it was just a matter of money,” but the demands are not only coming from the students, but from the majority of society, which is fed up, he added.

He said a wound that never healed has been opened up again, because the response to the crisis of 2006 was insufficient, since although the Organic Constitutional Law on Education (LOCE) enacted by Pinochet just one day before he stepped down was repealed, it was replaced by the General Law on Education (LGE) in 2009 that did not essentially modify educational policy.

The 2009 law did not modify the role of the state in such a way as to reduce the heavy concentration of funding and better teachers in middle-class schools, and to improve conditions in schools in poor neighbourhoods, he said.

Nor did it reverse the process of decentralisation and privatisation of the Chilean education system ushered in by the LOCE law. The dictatorship-era law transferred the administration of public schools from the Education Ministry to the country’s 345 municipalities, and also permitted the creation of state-subsidised private schools.

Far from breaking with this model, the successive administrations of the Coalition of Parties for Democracy entrenched it by, for example, authorising state-subsidised private schools to charge families a monthly fee for their children’s education, known as “shared financing.”

The 2009 law did not resolve the core problems of the system, its deep inequality and increasing social segregation, did not improve public education, and did not end shared financing, critics complain.

It did set stricter conditions for the owners of state-subsidised private schools and created an agency to oversee the quality of education and a superintendency of education to act as a watchdog for the correct use of public funds.

“The state did not assume the rights of its citizens; it put them in the hands of the market,” which is leading to the exhaustion of the neoliberal model, of “a society that has not managed to write its own constitution, but has a constitution that was imposed on it, that is not of the people,” Redondo said.

That is also what the movement for educational reform is demanding, as shown by the enormous banner held up by the students, teachers and organisations taking part in Thursday’s march in Santiago, which read “For Chile, for Education, for a New Constitution!”