BAGHDAD, Aug 27 2011 (IPS) - Rania was 16 years old when officials raped her during Saddam Hussein’s 1991 crackdown in Iraq’s Shia south. “My brothers were sentenced to death, and the price to stop this was to offer my body,” she says. 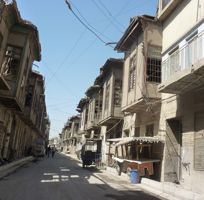 Cast out for bringing ‘shame’ to her family, Rania ran away to Baghdad and soon fell into living and working in Baghdad’s red light district.

Prostitution and sex trafficking are epidemic in Iraq, where the violence of military occupation and sectarian strife have smashed national institutions, impoverished the population and torn apart families and neighbourhoods. Over 100,000 civilians have been killed and an estimated 4.4 million Iraqis displaced since 2003.

“Wars and conflicts, wherever they are fought, invariably usher in sickeningly high level of violence against women and girls,” Amnesty International states.

Rania worked her way up as a sex trafficker’s deputy, collecting money from clients. “If I had four girls, and about 200 clients a day – it could be about 50 clients for each one of them,” she explains.

Sex costs about 100 dollars a session now, Rania says. Many virgin teenage girls are sold for around 5,000 dollars, and trafficked to popular destinations like northern Iraq, Syria and the United Arab Emirates. Non-virgins are about half that price.

Girls who run away to escape domestic violence or forced marriage are the most vulnerable prey for men working for pimps in bus stations and taxi stands. Some girls are also sold into marriages by family relatives, only to be handed over to trafficking rings.

Most of Iraq’s sex traffickers are predominantly female, running squalid brothels in neighbourhoods like the decrepit Al-Battaween district in central Baghdad.

Six years ago, a raid by U.S. troops on Rania’s brothel brought her nefarious career to an abrupt end. The prostitutes were charged along with everyone else for abetting terrorism.

Imprisonment changed Rania’s life. While she served time in Baghdad’s Al-Kadimiyah lock-up – where more than half the female inmates serve time for prostitution – a local women’s support group befriended her. Today she works for them as an undercover researcher, drawing on her years of experience and connections to infiltrate brothels throughout Iraq.

In one harrowing experience, Rania and two other girls visited a house in Baghdad’s Al-Jihad district, where girls as young as 16 were held to cater exclusively to the U.S. military. The brothel’s owner told Rania that an Iraqi interpreter employed by the Americans served as the go-between, transporting girls to and from the U.S. airport base.

Rania’s co-workers covertly took photos of the captive teenagers with their mobile phones, but were caught. “One girl went crazy,” Rania recalls. “She accused us of spying. I don’t know how we escaped,” she exclaims. “We had to run away – barefoot!”

Before the Gulf War in 1991, Iraq enjoyed the highest female literacy rate across the Middle East, and more Iraqi women were employed in skilled professions, like medicine and education, than in any other country in the region.

“Many factors combined to promote the rise of sex trafficking and prostitution in the area,” a Norwegian Church Aid report said last year.

“The US-led war and the chaos it has generated; the growing insecurity and lawlessness; corruption of authorities; the upsurge in religious extremism; economic hardship; marriage pressures; gender based violence and recurrent discrimination suffered by women; kidnappings of girls and women; the impunity of perpetrators of crimes, especially those against women; and the development of new technologies associated with the globalisation of the sex industry.”

The International Organisation of Migration (IOM) estimates 800,000 humans are trafficked across borders annually, but statistics within Iraq are very difficult to pin down.

Although the Iraqi constitution deems trafficking illegal, there are no criminal laws that effectively prosecute offenders. Perversely, it is often the victims of trafficking and prostitution that are punished.

IOM is currently working with an inter-ministerial panel to lobby for a new reading of the revised counter-trafficking law, which has been stalled by the government since 2009.

“We have reports about trafficking both inside and out of Iraq,” says senior deputy minister, Judge Asghar Al-Musawi, at the Ministry of Migration and Displacement.

“However, I admit that Iraqi government institutions are not mature enough to deal with this topic yet, as the departments are still in their growing phase.”

Human Rights Watch (HRW) says the government has done little to combat the issue. “This is a phenomenon that wasn’t prevalent in 2003,” says HRW researcher, Samer Muscati.

“We don’t have specific statistics. This is the first part to tackle the problem; we need to know how significant and widespread the problem is. This is something the government hasn’t been doing. It hasn’t monitored or cracked down on traffickers, and because of that there is this black hole in terms of information.”

Zeina, 18, is an example of an invisible statistic. According to the local Organisation of Women’s Freedom in Iraq (OWFI), she was 13 when her grandfather sold her to a sex trafficker in Dubai for 6,000 dollars. She performed only oral sex with customers until a wealthy man paid 4,000 dollars to take her virginity for one night.

After four years of prostitution, Zeina finally escaped the United Arab Emirates and returned back to her parents in Baghdad. She approached the authorities and took her grandfather to court. However, Zeina has since disappeared. OWFI has learned she was sold again, this time by her mother to a sex trafficker in Erbil.

OWFI director Yanar Mohammed says her office has been threatened for their advocacy against the lucrative trafficking industry, especially reporting on an infamous brothel owner in Al-Battaween district known as Emam.

“In each house there are almost 45 women and it is such a chaotic scene where women get treated like a cheap meat market,” describes Mohammed. “You step into the house and see women being exploited sexually, even not behind closed doors. So the woman who runs these houses makes an incredible income, and has a crew around her to protect what she does.”

Emam is said to enjoy close ties with the Interior Ministry, and has never had one of her four houses shut down. Despite OWFI’s expose, her operations are unaffected.

Mohammed sighs. “Iraq has a whole generation of women who are in their teens now, whose bodies have been turned into battlefields from criminal ideologies.”