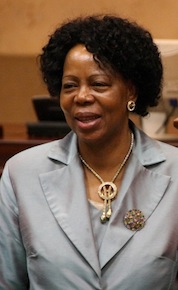 President of the PAP Women's Caucus, Mavis Matladi says it is more dangerous to be a woman than a soldier during conflict in Africa. Credit: Saaleha Bamjee

A resolution to foster women’s political participation in the domain of peacekeeping and conflict management was accepted on Friday at the 2011 Women’s Platform for Action in Africa (WPAA).

Under the auspices of the Pan-African Parliament (PAP), the WPAA meeting emphasised the urgent need for better female representation at national levels, where women can actively take part in decisions to prevent war and mediate conflict.

The two-day conference in Midrand from Sep. 29 to Sep. 30 comes ahead of the second session of the Pan-African Parliament in October.

Gender-based sexual violence, which has become a characteristic of armed conflict, is closely linked to gender relations within that culture, said Francoise Labelle of Mauritius who is second vice-president of PAP.

“It is only if women can play a full and equal part in the mediation processes that we will be able to build a foundation of peace,” Labelle said.

It also urges increased representation of women at all decision-making levels in conflict resolution and peace processes.

However, there has never been a female U.N. chief peace negotiator and women constitute less than eight percent of negotiating delegations in peace processes mediated by the U.N., while less than three percent are peace agreement signatories.

Women and young girls remain disproportionately affected during and after conflict.

“It is more dangerous to be a woman than a soldier during conflict,” said President of the PAP Women’s Caucus Mavis Matladi of South Africa.

“There is probably not a single African woman who has not witnessed violence against another woman. It is the truth that men fight wars and the women are the victims; whether by way of infrastructure breakdown, being forced to turn to sexual exploitation for survival or the after-effects of stigmatisation, forced pregnancies and STDS (sexually transmitted diseases),” she said.

Matladi said that although governments on the continent have shown commitment to the resolutions, there has been less emphasis on the roles women can play before, during and after conflict.

“Women usually play these parts informally, but formally there is little recognition. This exclusion leads to a failure to address women’s issues,” she said.

Marie Louise Baricako, the Chairperson of the Femmes Africa Solidarité (FAS), an international non- governmental organisation working on issues of gender, peace and development, said that the problem of rape and sexual violence being used as a weapon remains a neglected topic.

“It goes unpunished, and unrecognised. The perpetrators remain free, bringing in a new culture of rape and sexual violence; the Pan-African Parliament must do something about this,” she said.

The WPAA heard the testimony of a rape survivor who was targeted during post-election violence in Kenya.

The post election period of 2007 to 2008 left more than 1,100 people dead, 3,500 injured and up to 600,000 forcibly displaced. According to the International Criminal Court, during the two months after the disputed election results, “there were hundreds of rapes, possibly more, and over 100,000 properties were destroyed in six of Kenya’s eight provinces.”

The court is currently prosecuting six people accused of instigating the post-election violence.

The rape survivor described how she was gang-raped, violated with metal implements, had acid poured over her and was left for dead while her house burnt in front of her.

“I was in a bad state, my body was rotting. I couldn’t wear proper clothes because they would stick to my skin. But God has created me a new skin.

“I now have the strength to speak out and face women who’ve been raped and tell them to come out and stand their ground,” she said. She also lauded the efforts of women parliamentarians who are working to end the atrocities perpetrated against women.

U.N. Women Regional Programme Director Nomcebo Manzini said the work of the WPAA should move beyond sitting and listening to the testimonies of those brutalised by conflict. “We should be saying no to war,” she said.

To this end, under the auspices of the Pan-African Parliament, the resolution to form the Initiative of African Women for Peace (IAWP) was agreed upon in principle.

This delegation of women representing each of the continent’s five regions will be tasked with promoting democracy, peace and security and will also lobby at international institutions such as the U.N., African Union and World Bank.

Premier of the North West province in South Africa Thandi Modise said that while policies looked good on paper, they were failing on the ground.

“Governments have ratified but the implementation is lacking. It doesn’t matter how many seats we occupy, if these women don’t speak for women, we might as well not have them. There are women who can lead these countries in Africa; we are the consciences of our nations and this continent. Is it not time we spoke up collectively in one big voice?”

Goodwill Ambassador to the World Health Organization, Dr. Gertrude Mongella of Tanzania and the first president of PAP, urged the meeting to not subscribe to conflict for the sake of democratisation.