UNITED NATIONS, Sep 23 2011 (IPS) - If there were any lingering doubts the Palestinians would not be able to garner the support of an overwhelming majority of member states at the United Nations, they were laid to rest when the 193-member General Assembly Friday gave a rousing and rapturous welcome to Palestinian President Mahmoud Abbas. 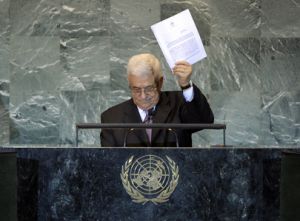 Palestinian President Mahmoud Abbas shows a copy of the application he submitted to the secretary-general for a formal application for UN membership. Credit: UN Photo/Marco Castro

As delegates from the United States and Israel sat glum-faced, the cavernous General Assembly Hall reverberated to more than a dozen rounds of sustained applause, including rare standing ovations, when Abbas made a plea for a separate nation state for Palestine.

After having submitted an application to Secretary-General Ban Ki- moon seeking full U.N. membership – in defiance of unrelenting U.S. pressure – Abbas kept the General Assembly riveted as he recounted the killings and destruction caused by the “occupying power” – and pleaded for recognition of statehood by the United Nations.

“I say: The time has come for my courageous and proud people, after decades of displacement and colonial occupation and ceaseless suffering, to live like other peoples of the earth, free in a sovereign and independent homeland,” he said.

“Your support for the establishment of the State of Palestine and for its admission to the United Nations as a full member is the greatest contribution to peacemaking in the Holy Land,” he said amidst loud cheers from delegates who are traditionally restrained, as diplomatic protocol demands.

Abbas submitted the application in the full knowledge that even if Palestine does get the required nine votes in the 15-member Security Council, the United States has vowed to negate the diplomatic victory by vetoing the request for statehood.

The United States is only one of five countries with veto powers, the others being Britain, France, China and Russia.

“I also appeal to the states that have not yet recognised the State of Palestine to do so,” he said.

Currently, more than 125 countries recognise Palestine as a state, outside the precincts of the United Nations.

Phyllis Bennis, director of the New Internationalism Project at the Washington-based Institute for Policy Studies and author of several publications on Middle East politics, told IPS the danger now is that the Security Council may, rather than moving towards a rapid vote schedule and an inevitable U.S. veto, instead create a committee, start an investigation, and otherwise move to bury the Palestinian application in the depths of the U.N. bureaucracy.

“It’s even possible,” she predicted, “that it might not resurface for months – perhaps even after the November 2012 U.S. election, which would of course mean President Barack Obama would not face the international consequences of the veto he has promised for domestic political reasons.”

John Quigley, professor of international law and comparative law at Ohio State University, told IPS the key practical point in Abbas’s speech was his statement that he had, earlier in the morning, conveyed an application for membership to the secretary-general, and that he had requested that its transmission to the Security Council be expedited.

His statement about expediting the transmission suggests that Abbas is not acceding to the U.S. request that action in the Security Council on the application be delayed for some period of time.

“Abbas did not mention proceeding at this time to the General Assembly for a resolution that would declare that the Palestine observer mission is the mission of a state,” he said.

Hence, that approach is apparently not being taken at this time, said Quigley, author of a 2010 publication titled “The Statehood of Palestine: International Law in the Middle East Conflict” (Cambridge University Press) where he argues Palestine is a “state” – in all its political realities.

Bennis told IPS that Abbas’s speech was very careful to include the rights of refugees as a continuing right, being careful to acknowledge the continuing position of the Palestine Liberation Organisation (PLO) as the sole legitimate representative of the Palestinian people.

“That’s important because there has been much fear among Palestinians, especially refugees, that the transfer of representation in the U.N. from the PLO to the government of an inchoate ‘state’ of Palestine could lead to the disenfranchisement of refugees both in terms of representation and in terms of fighting for their right of return, as guaranteed by U.N. resolution 194,” she pointed out.

Whether a “government” of Palestine acts on that right, of course, remains difficult, but it is a matter of political will far more than U.N. rules, said Bennis, author of the best-selling “Understanding the Palestinian-Israeli Conflict: A Primer”.

Bennis also said the most important aspect is the broadest – that this means the end of the failed U.S. backed “peace process” as the only diplomatic game in town.

She said it places the diplomacy squarely where it has always belonged – in the United Nations, not in Washington under U.S. control.

“And while that may be weakened by Abbas’s seeming commitment to continue to engage in this long-failed process, there is at least the basis for recreating the diplomatic basis away from the continuation of Israeli power and inevitable acceptance of occupation, apartheid and inequity, to a new basis of international law and human rights – based on an end to occupation, equality for all inside Israel and all states, and the right of return of refugees,” she said.

Speaking later in the afternoon, Israeli Prime Minister Benjamin Netanyahu said Israel still desired peace with the Palestinians and the creation of a Palestinian state, but only through negotiations.

Netanyahu’s suggestion that he and Abbas meet “here and now in New York represents the polar opposite of Abbas’s message to the world”, they said.

The international community should urge Abbas to take up this offer, the statement added.