AFRICA: “The Man Who Stopped the Desert”

CHANGWON, South Korea, Oct 19 2011 (IPS) - Yacouba Sawadogo, a peasant farmer from Burkina Faso, is known as the “man who stopped the desert.” But when he first tried to save his arid land from desertification by planting the trees that have since grown into a 15-hectare forest, people in his village thought he was mad. 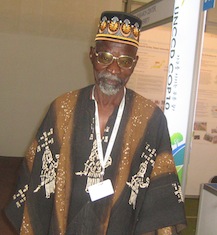 Some 30 years later the people of Gourga, in northwestern Burkina Faso, who left the infertile area for a better life in the city, are returning while Sawadogo travels the world sharing his success story.

Farmers, environmental experts and scientists are also flocking to Sawadogo’s home to learn about the man who singlehandedly stopped the desert.

Sawadogo’s story also attracted film director Mark Dodd who produced an award-winning film titled “The Man who Stopped the Desert”, which was showcased at the 10th session of the United Nations Convention to Combat Desertification (UNCCD) Congress of Parties (COP 10) currently being held in Changwon, South Korea.

But Sawadogo had not started out trying to save the land from desertification. Thirty years ago he was merely looking for a way to harvest his crop in an area where the land had become barren and many were giving up farming and migrating to urban areas.

“There was no food because of the drought and water was very scarce in my community,” the elderly, polygamous farmer told delegates at the UNCCD.

Sawadogo then realised that it was no longer sufficient to dig ordinary holes to plant his crop, so he decided to dig bigger and wider holes in order to retain rainwater for a longer period.

He also used compost to enhance the growth of the sesame seeds and cereals – sorghum and millet – that he grew.

“The traditional farming method used in my village allowed the rainwater to be easily washed away leaving the crops to dry up within a short space of time. That’s why I thought of a technique that would counter this problem,” said Sawadogo.

He was not only worried about food security but was concerned that the land in Gourga was rapidly turning into a desert. So he began planting trees. It not only saved the land from degradation but also restored ground water to unprecedented levels.

“People thought I was mad when I started planting these trees,” he said. “It is only now that they realise how beneficial the forest is.”

The trees, which he planted with the help of his family, are a thick forest of 15 hectares made up of indigenous plants, some of which are used for medicinal purposes.

He now gives away seeds for planting to farmers in Burkina Faso and in the Sahel, an ecoclimatic zone 1,000 kilometres wide that stretches from the Atlantic Ocean to the Red Sea.

"The traditional farming method used in my village allowed the rainwater to be easily washed away leaving the crops to dry up within a short space of time. That’s why I thought of a technique that would counter this problem,"
The facilitator of Africa’s Re-greening Initiatives at the Centre for International Cooperation, Chris Reij, said experts have a lot to learn from Sawadogo.

“Yacouba would have become a professor if he had been to school,” said Reiji. “Scientists come to learn from him.”

Dorcas Kaiser, a termite specialist, has been to Gourga to learn from the smallholder farmer about the role the insects play in land restoration.

“(It) is a scientist’s dream place to study the role of termites in the land restoration process,” said Kaiser.

World experts have debated land restoration, and masses of money has been spent trying to find solutions to desertification, land degradation and droughts, but so far these efforts have been fruitless, said Reij.

“It took a smallholder farmer to come up with a system that works where global agencies have failed,” said Reij.

Gnacadja said that planting trees, and using fertiliser on farmlands and grazing lands has already been adopted in many regions and has contributed to improving over six million hectares across Africa.

“These good practices should be scaled up and governments should encourage them everywhere when relevant,” he said.

Senior environment specialist cluster coordinator for sustainable land management at the Global Environment Facility (GEF), Dr Mohamed Bakarr, agreed and added that indigenous people like Sawadogo do not need a lot of money to make a difference.

“Policies that say you can’t own trees or you can’t have land tenure make people neglect these resources,” said Bakarr.

GEF is helping governments in Africa remove these barriers in order to create an enabling environment for people to become involved in combating desertification and creating food security.

However, despite saving Gourga from becoming a desert, Sawadogo may end up losing both his land and his forest. The Burkina Faso government is in the process of repossessing Sawadogo’s land for development.

He acquired the land through the traditional system and does not have a title deed, and the government has already started with their construction plans.

In the new land plan the government claims ownership of Sawadogo’s forest and fields and divides his father’s grave into two.

Seeing his father’s grave being split to give way for the construction of a house kills him as much as the idea of letting go of his forest does, Sawadogo said.

The only way Sawadogo can retain his land is if he buys it back from government. It is an option that he feels is both unfair and unaffordable.

Sawadogo would need 100,000 Euros to buy back the forest alone.

“This is unjust,” he said. “I’ve worked so hard for this and now the government is punishing me.”

He has been to the United States where he pled his case to President Barrack Obama and asked him to consider the plight of smallholder farmers in the G8’s Global Food Security Initiative for underdeveloped countries. The initiative was a pledge by the G8 to boost world food security.

“What Yacouba has started has to be preserved,” said Reij, who is working closely with the farmer.

Gnacadja reminded delegates that if desertification, land degradation and drought occur unabated, the world would continue witnessing political instability and famine, like the one occurring in the Horn of Africa.