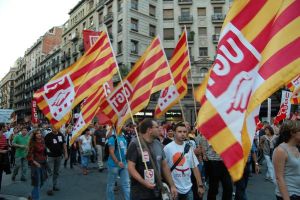 Ironically, Athens is today the site of intense dissatisfaction with the current economic system, with thousands of unemployed people flooding the streets in protest of deep budget cuts and severe austerity measures that have made it impossible for the average “household” to survive.

Not only in Greece but workers from every corner of the world are resisting economic practices that they say reap profit for the wealthy by exploiting the labour of the average working person. A global wave of protest, buoyed by the ongoing Arab Spring, is crashing over capitals as far-flung as Tunis and Madrid, New York City and Beijing.

Today, as world unemployment peaks at 2.5 million, millions of workers from over 100 countries are taking part in an international day of action to mark the World Day for Decent Work (WDDW), demanding stronger government action for economic recovery.

But some believe that even decent work and worker security will not suffice to halt the global crisis, without a full transformation of the capitalist system.

"When we first talked about socialism, it was to make sure that workers got the full fruit of their labour and had economic security," Howie Hawkins, a 2010 Green Party candidate for New York governor, told IPS.

"Now we are talking of ecological socialism (ecosocialism), which means that part of workers' security depends on a sustainable interaction between the economy and nature so that we're not destroying ecology even for so-called 'economic progress'.

"Awareness is rising around the world that the capitalist system itself is the great driver of ecological breakdown," Joel Kovel, author of 'The Enemy of Nature: The End of Capitalism or the End of the World?', told IPS.

"This becomes more and more extreme because of the inherently cancerous growth of the capitalist system and its ravaging of ecosystems from mountaintops to the sea bed," he added.

"The process is inexorable, and so is the growth of the idea that the only sane way out is for the people of the world to come together to build an alternative to the ruling capitalist system."

"The present crisis must be seen, then, as having revolutionary proportions. A word for the type of revolution at stake is ecosocialism: a society in which the present class system is replaced by a free association of producers guided by an ethic of ecological integrity," Kovel told IPS.

"This is the big struggle of our time. It is global in scale and the future hangs in the balance," he said.


“Since the current crisis began in 2008, world unemployment has hit over 200 million,” ITUC general secretary Sharan Burrow told IPS. “Tens of millions of young workers enter the labour market each year, and governments have nothing to offer them, or the millions already jobless, for a secure future.”

“Wall Street, the American Chamber of Commerce and their global allies are pushing governments everywhere to cut wages and protections even further,” she added.

In Mexico, for example, unemployment has increased and informal sector employment has skyrocketed since the global financial crisis broke out in 2008 – a crisis from which the country has not yet recovered.

This year unemployment rose to 5.79 percent – 2.6 million people out of an economically active population of 49 million and a total population of 112 million, according to the government statistics institute INEGI. Add to this the 13.4 million people employed in the informal sector of the economy and the picture looks even bleaker.

Meanwhile, countries like Argentina that actually have declining unemployment rates face a serious crisis of a ballooning informal, unsafe sector.

Currently 34.5 percent of the labour force is involved in the informal economy, a figure that does not include the rural sector where informal work abounds.

While South America suffers on one side of the globe, Central and Eastern Europe are also nursing some of the highest unemployment rates in the EU. Slovakia, for instance, has a jobless rate of 13.4 percent, Hungary sits stagnant at 10.3 percent, while the Baltic states Lithuania and Latvia have rates of 15.6 percent and 16.2 percent, respectively, according to the EU’s statistic office Eurostat.

Workers in various sectors throughout the region have recently staged a string of strikes, resignations or other industrial actions against government underfunding of their professions and poor wages and working conditions.

Earlier this month, thousands of Hungarian trade union activists gathered in front of parliament to protest the policies of Prime Minister Viktor Orban’s government, which they claim will discriminate against lower paid workers while benefitting the rich.

In neighbouring Slovakia, thousands of doctors at state hospitals this month handed in their resignations en masse in protest at underfunding of the health sector’s pitiful wages and poor conditions, including being forced to break labour laws by working long shifts. Doctors’ unions are also demanding the government stop controversial reforms of hospitals that would turn them into for- profit business structures.

These actions, expected to be followed by Slovak nurses’ unions, come just months after Czech doctors did the same thing, eventually forcing the Czech government to pledge health sector reforms.

This year has also seen mass industrial action by unions in Romania, one of Europe’s poorest countries, which has struggled to deal with austerity measures imposed as part of a loan deal with the International Monetary Fund (IMF) following the financial crisis.

A particularly memorable protest in March saw more than 8,000 workers on the streets demonstrating against government attempts to change labour laws which they said would effectively end the possibility of setting up new workers’ organisations and decentralise collective bargaining by tying it primarily to company-level negotiations.

According to the ITUC, other actions Friday include Japanese workers taking part in post-tsunami reconstruction and Brazilian workers constructing the 2014 FIFA World Cup and 2016 Olympic stadia.

“Incomes [in Mexico] have fallen and have not recovered; real incomes have dropped 70 percent since 1982 and women and the young have been hit particularly hard by the recession. Of the country’s 30 million young people between the ages of 14 and 29, 1.5 million do not work, according to the latest national work and employment census.”

According to the ITUC, the Decent Work Agenda was initiated in 1999 and developed by the International Labour Organisation constituents: governments, employers and workers. In 2005, the final outcome statement, supported by 150 world leaders, was delivered at the U.N. World Summit with a pledge to put the decent work and productive employment agenda at the centre of national and international policies.

However, the agenda is missing from most key development cooperation policies, with the clause on decent work completely omitted from crucial agreements like the 2005 Paris Declaration and the 2008 Accra Agenda for Action.

“Now, with the Fourth High Level Forum on Aid Effectiveness in Busan, Korea, less than two months away, there is finally a chance to give this crucial element the space it deserves in the international development agenda,” Jan Dereymaeker, the coordinator of the Trade Union Development Cooperation Network said this week.

“We are gathering real momentum in the fight-back, as more and more people refuse to accept that their well-being and that of future generations will be held to hostage,” the ITUC’s Burrow told IPS.