BRAZIL: Suape Port Complex, the Locomotive of the Northeast

RECIFE, Brazil, Oct 5 2011 (IPS) - Silvio Leimig was 18 years old and had just earned his driver’s licence when he visited Suape, a port 40 km from his home in Recife, the capital of the state of Pernambuco in Brazil’s Northeast region, in the early 1980s. 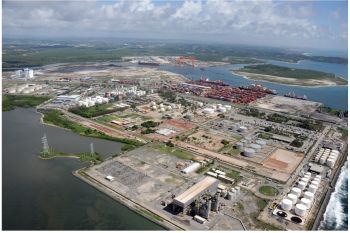 The Suape Industrial Port Complex is in a process of constant expansion. Credit: Mario Osava/IPS

He immediately got the feeling that the area around the port would take off, and that his future lay there.

At the time Suape was little more than an ambitious industrial port complex project designed in the 1970s to bring the Northeast, Brazil’s poorest region, a level of economic development similar to what the south already enjoyed.

Some 30 years later, Leimig, an electrical engineer specialising in transport, has seen his premonition come true. Today he is one of the directors of the Suape Industrial Port Complex, the motor of the remarkably fast industrialisation process in and around Pernambuco.

It took three decades for the project to get off the ground, after it was included in the Pernambuco state government’s plans in 1975. But once the ball got rolling, there was no stopping it.

The decision by Italian carmaker Fiat, which decided not to build a new plant in Suape, but in Goiana, 100 km to the north, instead, will help keep the area from becoming too congested, said Daniel Cabral, an adviser to Leimig.

The new 14,000-hectare site in Goiana will allow Fiat to expand annual production to 300,000 vehicles, and will make it possible for car part manufacturers to set up shop there as well, the Italian company said.

That is larger than the entire Suape port area, which covers 13,500 hectares, 59 percent of which is earmarked for environmental preservation.

The state government is considering building a new port and an airport in Goiana, to serve the car industry there. But the Suape port, which played a decisive role in drawing Fiat to Pernambuco in the first place, will still be important for the company's operations.


In the space of just a few years, more than 100 companies have set up shop in the area, and over 30 are still busy building their factories, including a refinery and three petrochemical plants.

For example, Latin America’s largest wheat flour mill, owned by the Bunge agribusiness company, operates in Suape, along with a shipyard that is a joint venture between three Brazilian companies and South Korea’s Samsung Heavy Industries, which employs 7,400 workers and has orders that cover deliveries “for the next 10 years.”

Around 80,000 workers commute to and from Suape every day, Leimig responded to IPS with some haste as he tried to head home before 4:00 pm to beat rush hour, when the flow of trucks and buses along the area’s narrow and increasingly rundown roads creates “hellish” traffic jams.

Just a month ago there were a total of 70,000 employees, said the director of Suape Global, a multisectoral forum that aims to transform the port into an international oil, gas, offshore and shipbuilding equipment and services supply complex.

But Felipe Chaves, a senior official at the Pernambuco state’s Secretariat of Economic Development, said a shortage of infrastructure and skilled labour power is a drag on the explosive rate of development.

The local population and authorities, after waiting so long for the influx of industries drawn by the port, were caught off guard by how fast their dream of development and industrial growth has been coming true.

There was neither time nor financing to adapt the roads, designed to serve an economy based largely on tourism, to the traffic of thousands of heavy vehicles a day, or to prepare the city for the flood of workers from all around the country.

“Some 3,000 buses transport the workers every day – three times the previous bus traffic,” said Rubia Melo, coordinator of natural resources in the municipal government of Cabo Santo Agostinho, a nearby resort town. In just three years, “everything changed,” she said.

Local hotels and family homes turned overnight into lodging for workers, given the shortage of housing built by the companies, which only sufficed for just over 10,000 workers.

Rent for even the most modest homes has climbed from 300 to 800 reals (162 to 432 dollars) a month, she said, citing one example of how prices have soared as a result of the avalanche of workers.

Some 20,000 Suape workers are living in Cabo, where the industrial port complex employs slightly more locals than outsiders, according to Abel dos Santos Neto, municipal secretary of economic development and tourism.

The municipality has a population of 185,000, according to the 2010 Brazilian census, but the population is growing steadily.

The subsequent explosion of demand has driven up prices and increased the urgency in investing in infrastructure, education and public security, Neto said.

But Melo said the number of homicides has dropped from an average of 12 a month to four or five, which he attributed to the strong performance of the municipal police.

However, “fights and assaults are on the rise, as are teen pregnancy, the number of single mothers, prostitution and drug trafficking,” said Neto, who added that his town suffers certain impacts due to its location between Recife to the north and the municipality of Ipojuca, where Suape is located, to the south.

Ipojuca and Cabo have become dormitory cities for Suape, and tourism in these municipalities has been affected by the increasingly heavy traffic, especially in Ipojuca, internationally renowned for its beaches and the Porto de Galinha resort area.

According to Neto, these are growing pains. He expressed pride in “taking part in a government that is transforming people’s lives; in the construction of a great future for the city. Since I was a child, I saw the potential of Suape and Cabo de Santo Agostinho,” he said.

Widening the local highways, building a ring road to keep heavy vehicles out of the cities, and extending railroads to Suape are measures currently being undertaken to decongest traffic in the metropolitan region of Recife, which encompasses 14 municipalities (including Ipojuca and Cabo) that are home to 3.7 million people, said Roberto de Abreu e Lima, executive secretary of business development at the Pernambuco state’s Secretariat of Economic Development.

Another challenge is expanding the economic growth to other parts of the state, since 80 percent of Pernambuco’s GDP is concentrated in a 60-km radius around Recife, he said. The Transnordestino railway, construction of which is to be completed in two years and which will cross the state from east to west, will be essential for that purpose, he added.

Suape initially tried to attract any kind of business, in an attempt to create clusters of food, ceramic, energy or auto parts industries. But now it has started to be more selective, accepting only businesses that need to be near the port, and plants involved in the oil, gas, naval and offshore industries, Leimig said.

Chosen as the best state port in Brazil by two different institutions, Suape “has restored the pride of the Pernambucanos” by invigorating economic growth in the state, said Leimig.

People had been “depressed” about the state’s failure to attract major industrial projects in the past, like a plant that Ford decided, in 1999, to build in the neighbouring state of Bahia, he said.