Imperative Libyans Decide Their Own Future

MIDRAND, South Africa, Oct 12 2011 (IPS) - The African Union must take the lead in helping Libya achieve peace by ensuring the formation of a unity government between pro-Muammar Gaddafi forces and the National Transitional Council, as this and not foreign intervention will pave the way for peace and stability in Libya. 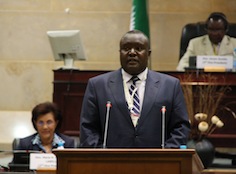 The Pan African Parliament (PAP) – the legislative organ of the African Union (AU) – adopted this recommendation after hearing a report on how foreign military intervention in Libya has resulted in civilian casualties and infrastructure breakdowns that threaten the country’s future on Wednesday in Midrand, South Africa. The parliament is meeting here from Oct. 3 to 14 for the Fifth Ordinary Session of the Second Parliament.

“It is imperative that Libyan citizens should decide their future democratically,” said PAP member Chief Fortune Charumbira of Zimbabwe.

Charumbira headed a PAP-authorised fact-finding delegation to the Libyan capital Tripoli, after protests and subsequent armed interventions by the North Atlantic Treaty Organization (NATO) in the North African country led to the toppling of its leader of 41 years, Gaddafi, and the establishment of the National Transitional Council (NTC) as a provisional governing body.

Presenting the delegations’ report before PAP, Charumbira called for the immediate cessation of war in Libya and recommended that the country should remain a sovereign state with both the NTC and the pro-Gaddafi forces working together. He said that the AU should take the lead in helping Libya move towards a peaceful solution.

The report noted that the situation on the ground was worsening each day on both sides. “Today Libyans are fighting and killing Libyans. This can be viewed as a civil war. Private and public properties, including administrative blocks have been destroyed. Black Africans are being mistaken for mercenaries and are being tortured and killed,” said Charumbira.

“The fact is that NATO has deviated from the United Nations Security Council’s objective to protect civilians, it has instead killed hundreds of thousands of civilians in its strikes,” Charumbira said.

PAP member Ahmed Reza Issack of Mauritius who accompanied the delegation to Libya told IPS “the fear there is palpable.”

“We need to leave the country to its own people. Libya for Libyans. The NATO raids have resulted in immense insecurity. We met a mother who’d lost her daughter who was so stricken by the bombardment that she died of heart failure while hiding in a toilet,” Issack said.

Charumbira added that the AU needed a united approach.

“It is, however, of great concern that despite the enormous challenges that the African continent is confronted with, the AU lacks a united approach to issues affecting the continent,” Charumbira said.

He referred to the fact that the AU was late to recognise the NTC as the legitimate authority in Libya at the United Nations headquarters in New York only after African states had already done so, and despite the AU’s earlier resolution that they would only accept the NTC after its formation as an inclusive transitional government.

“It is therefore not surprising that the AU has been marginalised by NATO member states in respect of the conflict in Libya,” Charumbira said.

For Charumbira, the future of Libya is far from certain.

“The first challenge for the NTC is to establish law and order in the country, especially in Tripoli. A major concern is that there is a proliferation of small arms and this could create future problems with sides wanting to avenge the deaths of their family and comrades. Reconciliation will be very important in going forward,” he said.

PAP parliamentarian Mohammed Ali Almardi of Sudan said that the parliament should encourage the NTC to support the AU. He noted that previously Gaddafi, in support of the AU, used to pay for the AU membership of several other African countries.

“We must remember that these were not his private funds but the funds of the people of Libya. We need to then encourage the NTC to take this further and support the AU roadmap to building peace and development on the continent by joining us.”