BUKA, Bougainville , Oct 16 2011 (IPS) - Whether the world’s largest open-cut mine on this island territory of Papua New Guinea (PNG) will resume copper and gold production, after being mothballed for 22 years, will depend on how satisfied matrilineal landowners are with the proposals. 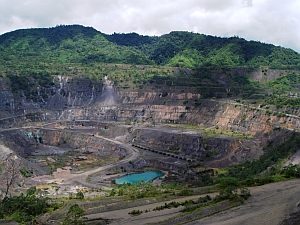 The women landowners are already raising issues about the potential impact on their land and communities if copper mining resumes at the site in the central mountainous district of Panguna.

“What sort of mining and with what process will it reopen?” asks Patricia Tapakau, president of the Panguna Women in Mining, an organisation which represents women in 13 mining affected villages. “We need to know, because we don’t want any more destruction. We have had enough of that.”

The Panguna copper mine opened in 1969 when Bougainville was under Australian colonial administration and customary landowners were excluded from the Bougainville Copper Agreement between the Australian government and the mining company, Conzinc Rio Tinto Australia.

For 20 years, the Barapang, Kurabang, Basikang and Bakoringku clans, customary landowners of the mine pit, endured devastation of their land and waterways by waste from what was the mine, community evictions and negligible share in profits.

In 1989, following BCL’s refusal to pay the landowners’ demand of 10 billion kina (454 million dollars) compensation, the Bougainville Revolutionary Army (BRA) forced the mine to close.

The PNG government, a major owner (19.06 percent) of the operating company, Bougainville Copper Ltd (BCL), alongside British multinational, Rio Tinto (53.58 percent), imposed a blockade on the island and a 10-year civil war followed during which 20,000 people died, communities suffered human rights abuses and infrastructure was destroyed.

Helen Hakena, director of the Leitana Nehan Women’s Development Agency, a local NGO, counsels women victims of violence and develops leadership capacity and awareness of land rights in communities. She said a significant achievement since the 2001 Bougainville Peace Agreement was the formation of the Autonomous Bougainville Government (ABG) in 2005.

“We have our own government in place and a lot has been achieved in terms of peace-building and the laying down of arms,” Hakena recounted. “The setting up of businesses here has been a good thing, and schools and other institutions have been opened.”

However, the population of Bougainville has doubled from 175,000 in 2000 to over 300,000 now, and with the island’s current revenue deriving mainly from international aid donors, public services remain limited. Many villages lack electricity, clean water and adequate medical services.

The ABG views potential mining revenues as vital to developing services and attaining economic self-sufficiency for the second pillar of the Peace Agreement, a referendum on independence from PNG within the next 5-10 years.

In May, BCL chairman Peter Taylor visited Bougainville with a business delegation and held preliminary discussions with Bougainville President John Morris about reopening the Panguna mine, which the company estimates has reserves of 3.5 million tonnes of copper and 12.7 million ounces of gold.

Taylor stated publicly that he expects the ABG and landowners to lead in mining negotiations. However, women landowners remain concerned that the customary value of land as a source of livelihood will give way to corporate interests that see land as an expendable resource.

“The important thing about the land is that, to us, it is like a mother, because we feed on the land,” said Joanne Dateransi. “We always depend on land; it cannot be compared to money.”

The women say the economic potential of local industries, such as cocoa, copra and tourism must be fully explored first and unresolved issues, following the mine’s abandonment, must be addressed, including financial compensation and environmental damage.

“The first thing, the government and the company, they have to pay that 10 billion kina, which is part of the (landowners’) demands, then the killings and the damage has to be paid. Then we talk about the mining issue,” said Panguna landowner Lynette Ona.

“The chemicals are still there in the river,” she said. “No one drinks the water, there is no fish there, it is still the same,” said Ona who promotes the participation of women in local politics and plans to be candidate in the 2012 Bougainville elections.

An environmental report on the Panguna mine by Applied Geology Associates (1998) spoke of thousands of tonnes of tailings including toxic metals such as mercury, lead and zinc. Tailings flowing into the nearby Jaba river decimated fish and contaminated water supplies and crops.

“It (BCL) has to come up with a very good plan on how to dispose of toxic waste,” stated Coleman. What has happened as a result of the mine being closed is the (improved) fertility of the soil. We never had coconuts (during the mine’s operation) in our own village, now you can see trees full of coconuts.”

Long-term political and social unity is also a key issue with reconciliation and weapons disposal incomplete. A survey, supported by PNG’s ‘Post Courier’ newspaper, of 500 families in Central Bougainville affected by the civil war death toll of 1,629, showed households still in possession of weapons.

“We will not take away all the guns,” Hakena said. “But there needs to be a priority set by the government in getting those arms out before the (possible) reopening of the Panguna mine.”

However, a decision on whether the mine will reopen is still to be made by the ABG, landowners, the PNG government and BCL.

ABG’s chief mining officer, Stephen Burian, said new mining laws were being drafted with assistance from the World Bank, but a review of the Bougainville Copper Agreement, a precondition to mine negotiations, awaits unification of all landowners in mining affected areas under the Panguna Landowners Association and an independent environmental audit made.

The Panguna community also includes the Mekamui hardliners, comprising many former BRA fighters, who control access to the Panguna mine and have not yet agreed to any mining proposals.

What is clear is that the mine’s future is in the hands of Bougainville people who want to see strategies of economic development that preserve human rights, social cohesion, environment and culture.

“We want to develop, but to redevelop from the mistakes, not to repeat the mistakes (of the past),” said Tapakau.