MIDRAND, South Africa, Oct 16 2011 (IPS) - Sudan and South Sudan will eventually agree on a reasonable oil-sharing agreement between the two nations as there has been political will from both sides to find a resolution. 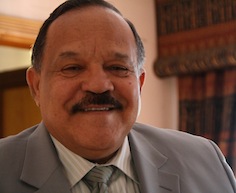 This is according to Dr. Ali Yousif Ahmed Alsharif, Sudan’s ambassador to South Africa.

His comment comes as South Sudanese President Salva Kiir made his first official state visit to Sudan on Oct. 8. Alsharif said that Kiir’s visit is proof that there is now political will from both sides towards reaching an agreement, “and this is an important development.”

“Ultimately they will agree on a reasonable outcome. Co-operation between the two countries is very important; it is a matter of viability of the two countries. They have to be viable to live together. The south is landlocked and they need the ports of Sudan,” Alsharif told IPS.

“During the visit they agreed to never resort to war to solve problems and that dialogue would be the basis of a resolution,” Alsharif said.

Alsharif was attending the Pan-African Parliament, which wrapped up its Fifth Ordinary Session of the Second Parliament in Midrand, South Africa on Friday.

IPS spoke to Alsharif about the difficulties facing both Sudan and South Sudan after secession in July and the tensions in the Abyei region. Abeyi remains part of Sudan and could join South Sudan if ethnic groups in the region vote in a referendum to do so.

Alsharif explained that the oil-rich Abyei region is populated by the Dinka Ngok tribe, the biggest ethnic group in South Sudan and the Missiriya, a northern nomadic tribe.

Q: What challenges do Sudan and South Sudan face after the secession? A: The “divorce” has not been an easy one.

In accordance with the comprehensive peace agreement, it was agreed that the Abyei region was to have a referendum to determine the future of the area and whether its residents want to stay in Sudan or if they want to be part of South Sudan. In this referendum it would have been both the (South Sudanese) and (Sudanese) in the area voting.

The problem was caused by the refusal of the south to allow the Missiriya tribe to vote. The south said only the Dinka Ngok could vote. The north said otherwise.

The tensions are still going on and the referendum is pending. It has resulted in the Sudanese army occupying the area because of attacks from the army of the south. Now there is an agreement for Ethiopian troops, under a United Nations mandate, to replace the Sudanese Army and a joint administration will be formed between Sudan and South Sudan and negotiations will continue.

Q: What of the oil-sharing issue between Sudan and South Sudan? A: The oil sharing (agreement) is pending. About 75 percent of the discovered oil is in the south with the rest in the north. The entire oil infrastructure, however, is based in the north.

We are now discussing dividing the oil wealth and there is no problem with the share, 75 to 25 percent. The issue is with the pricing. Although the offer to accept the 75 to 25 percent (share) is a little bit unfair for the north.

According to international practice, you usually (split the resources) 50 to 50 percent for 10 or 15 years after the split because initially (the previously combined nation) contributed to the set-up costs etc. That is why the north wants to charge more for transport, to replace the loss of income.

Q: Some political analysts are saying that China, due to its large oil investments in Sudan, is in a position to play a greater diplomatic role in reducing conflict between South Sudan and Sudan. What are your thoughts on this? A: I was the Sudanese ambassador to China in 1993 to 1998 and this was when we started co- operation with them in Sudan. The government in South Sudan of course inherited the agreements that were signed by the government of Sudan at that time.

So China is in the south and China is also in the north, and it is in the interests of all three parties to co-operate in a constructive way.

In our experience, China has been a very good partner in development and we think they will be a very good element of stability and development between the north and the south.

The presence of China in Africa raises the envy and concerns of the West, because they see that China is a stable economy when the economies of Europe and America are in shambles.

Q: How would you react to the claim that the conflict affecting the communities along the border states will result in genocide? A: The main reason for the conflict in Blue Nile and Southern Kordofan is that there are many individuals who fought with the southern Sudan People’s Liberation Movement (SPLM) and its army (Sudan People’s Liberation Army (SPLA)). When the south signed the peace agreement, it had to be decided how they were going to move forward, and how the regions were to be ruled within a united north Sudan.

We started to have problems, caused by elements from the SPLA.

In Southern Kordofan we had general elections during 2009 and the SPLM disagreed with the census, despite it being declared fair by the international community.

Based on a second census, they held elections and the northern-affiliated National Congress Party (NCP) candidate won and the NCP obtained more seats than the SPLM. The SPLM then said the elections were rigged and started the fighting.

In the Blue Nile, it was a similar problem with the SPLM faction in the north.

So there is no genocide, but it seems that when rebel forces attack and kill it is tolerated, but when government forces act to protect, it is seen (differently).

During Kiir’s visit to Khartoum he was requested to refrain from supporting the rebels who fight in the north, no matter what their previous relations were. South Sudan is now a sovereign state and has no right to interfere in the affairs of the north.