KHARTOUM, Oct 3 2011 (IPS) - China, a major player in the oil industries of South Sudan and Sudan, could use its influence to stop the escalating violence between the two countries that has seen the displacement of thousands of people and a reduction in oil production, a United States State Department official says. 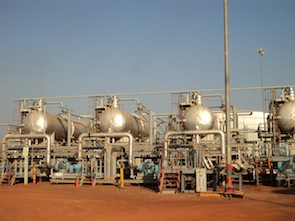 China imports more than 60 percent of Sudan’s oil and owns a 40 percent share in Petrodar and the Greater Nile Petroleum Operating Co., the largest oil giants in Sudan, according to the Chinese Academy of Social Science.

Southern Kordofan, a state in Sudan that borders South Sudan, has witnessed ongoing fighting since June and Blue Nile state, a state in Sudan close to the Ethiopian border, became embroiled in conflict in early September. Both conflicts are between the Sudan People’s Liberation Movement-North (SPLM-N), a group affiliated with the Sudan People’s Liberation Movement, the ruling party in South Sudan, and the Sudanese army.

In the early stages of the now full-fledged conflict in South Kordofan United States State Department spokeswoman Victoria Nuland pointed out, “It’s hard to have money and oil when there’s no peace,” adding that Beijing should “take this opportunity to (stop) the violence in Sudan.”

“The U.S. doesn’t have much of a (diplomatic) muscle to flex any more,” David Shinn, former United States ambassador to Ethiopia, told IPS back in June.

“The only thing it can do other than pontificate more vociferously than it has in the past is to threaten to slow down any aspects of the normalisation of relations.”

However, this method of dangling the carrot of possible debt relief and political pardons before the dictator has not had much of an impact on Sudanese President Omar al-Bashir, the only sitting head of state to have been indicted by the International Criminal Court (ICC).

Even though most of the oil is concentrated in the newly independent South Sudan, the pipelines, support services and the bulk of the infrastructure that supports the oil industry are in Sudan.

Since last year, the two nations have been in talks about the fees Sudan charges for use of its infrastructure. “South Sudan’s main income is derived from its oil revenues, the South will protect the oil industry despite the ongoing conflict because they can’t afford to lose oil production, even if it is temporary,” said Mohammed Adel (not his real name), an employee in Petrodar’s pipeline department. About 98 percent of South Sudan’s revenue is from oil.

When Petrodar began oil production after its 1,506 km pipeline was completed in 2006, oil production rose from 300,000 bpd to 500,000. Only 100,000 to 110,000 bpd of Sudan’s daily output was produced in North Sudan, the rest came from the oilfield in what is now South Sudan. The Petrodar pipeline runs from Melut Basin in Upper Nile state, South Sudan to Port Sudan. Upper Nile state is located between two conflict areas, Southern Kordofan and Blue Nile state.

Last month, the Sudanese government withheld 600,000 barrels of oil for 24 hours demanding custom duties. However, the barrels were eventually released and it is unknown if South Sudan paid the duties or not.

In an interview with the London-based Saudi Arabian newspaper, Asharq Al Awsat, al-Bashir stated that the government of South Sudan needed to decide on transit fees before the end of October.

However, the South Sudanese government wants the negotiations on oil to take place at an African Union meeting chaired by Thabo Mbeki, the former president of South Africa.

“Many people believe that plunging oil revenues will deter the North from forging ahead with war. But I think the real question is whether Khartoum can maintain its political stranglehold over a population frustrated by severe inflation and skyrocketing food prices without a war,” Eric Reeves, a Sudan analyst and researcher at Smith College in the United States, told IPS.

Given this reality, the only actor with real diplomatic leverage over Sudan is China, whose hunger for endless oil profits – which will now depend on maintaining warm relations with al-Bashir’s foes in oil- rich South Sudan – can hopefully trump its avuncular attitude towards the North that has persisted through decades of atrocities committed by the ruling National Congress Party.

Given that China is the world’s biggest oil importer after the U.S., relying on Sudan and Libya for the bulk of its supply, the rising superpower is unlikely to sacrifice its petro-lubricated economic boom for the sake of honoring old ties with al-Bashir – especially when the latter is risking all-out war around the precious oilfields in the South.

A 2008 Wiki-leaked State Department cable from ICC prosecutor Luis Moreno Ocampo stated, “China does not care what happens to Bashir and would not oppose his arrest if (oil) revenues were not interrupted.”

Hafiz Mohammed, a Sudanese political analyst agreed with this saying that the Chinese petroleum companies were only interested in oil.

“Most of the Sudanese oil is explored by Chinese petroleum companies who do not care much about human rights, they care about investment and trade,” said Mohammed.

“To some extent, oil fuels conflict by financing conflict, instead of bringing prosperity, growth and elevating society, it also polarises the political sphere since opposing opinions are bought with oil money,” he told IPS.

China has invested in Sudan while western companies are wary of investing in the country because of its human rights records and the U.S. sanctions imposed on Sudan since the 1990s for allegedly supporting terrorism and the ongoing conflict between the government and rebel groups.

“In the boom years, the Sudanese oil industry was a high risk, high profit sector. Western corporations were as involved as the Chinese, however, the latter are under no pressure from domestic lobbies to quit the business,” said El Gizouli.

In 2003, Canadian energy group Talisman, sold its 25 percent stake in the Greater Nile Oil Company after it received heavy criticism from human rights companies at home.

China has also faced criticism by international rights groups, namely in 2008 when the Olympics were nicknamed the “Genocide Olympics” because Chinese oil corporations continued to work in without attempting to use their influence to pressure the Sudanese government to resolve the conflict in Darfur.

The European Coalition on Oil in Sudan (ECOS) reports that since 1996, oil exploration and production has caused mass displacement for the indigenous populations in oil-rich areas, most notably, Unity state, where the Greater Nile oil pipeline begins.

ECOS reported that over 15,000 were known to be forcibly displaced in Melut and Maban counties in Unity state and many were arrested by the army for complaining to oil corporations about their land rights.