SUDAN: Close to War As the South Prepares to Celebrate Independence

KHARTOUM, Jul 8 2011 (IPS) - Sudan is closest to civil war since the signing of the Comprehensive Peace Agreement (CPA) in 2005. 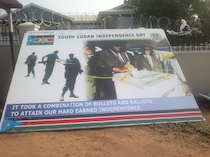 A report released by a coalition of Sudanese, African, Arab and Western non-governmental organsations warns that Sudan is closest to civil war since the signing of the CPA in 2005.

The report titled “Beyond the Pledge: International Engagement After Sudan’s Comprehensive Peace Agreement” views the ongoing conflict between the North and South as a predecessor to a full-blown civil war and urges the international community to adopt more targeted sanctions.

Abdel Moniem Al Gak, an activist and co-founder of the Sudan Democracy First Group was involved in the writing and production of the report. Through his organisation, he lobbies for human rights and democracy in Sudan.

He has been based in Juba since his arrest and subsequent detention after the Sudanese government cracked down on international and Sudanese organisations following an arrest warrant issued for Sudanese President Omar Al-Bashir by the International Criminal Court in March 2009.

“Sudan is not on the brink of war, Sudan is at war. It is living a state of displacement, destruction, violation of rights and deterioration of human rights in all parts of the country,” said Al Gak in a phone interview with IPS.

He added that citizens in different regions in Sudan, the East, Darfur, Blue Nile and Southern Kordofan could suffer the same fate as South Sudan and call for their right to self-determination. He attributed this to peace agreements that do not affect the average citizen and development that contributes to more suffering and causes loss of heritage and displacement.

In May 2011, the Sudan Armed Forces (SAF) declared that they seized control of Abyei after three days of bloody clashes with Southern soldiers. The army attributed the reason behind the conflict as the ambush and subsequent killing of 22 soldiers of northern origin. Abyei was the site of aerial bombardment and most of its population fled.

International condemnation and campaigning pushed the United Nations to take action immediately and in June, the United Nations Interim Security Force for Abyei was formed and it deployed 4,200 Ethiopian soldiers on Jun. 27 for six months.

Abyei, an area barely visible on a map, has witnessed a series of conflicts since the singing of the CPA between the government of Sudan led by the ruling party, the National Congress Party (NCP) and the Sudan People’s Liberation Movement (SPLM). In March 2008, at least 25,000 were displaced after soldiers from the SPLM clashed with Sudanese soldiers.

Currently, the coalition’s report estimates that 113,000 are displaced as a result of conflicts in Abyei. Abyei was supposed to hold a referendum simultaneously with the South Sudanese referendum to choose whether it wants to become part of the southern “Northern Bahr El Ghazal” state or the northern “South Kordofan” state. The referendum was postponed indefinitely after the two peace partners disagreed on the terms of eligibility to vote.

The report recommends that Abyei and Southern Kordofan need an immediate ceasefire for the displaced to return home and the volatile north-south border on which they are located needs to be a demilitarised zone.

Al Baqir Mukhtar Afifi, the director of Al-Khatim Adlan Centre for Enlightenment and Human Development, one of the organisations involved in the report, states that the report was inspired by all the pending issues between the two partners in the CPA that remain unresolved even though it expires in two days.

“In addition to the issues that may ignite war – citizenship, borders, oil, international debt and assets, Abyei is a real possibility of becoming the ignition of war between the two parts of the split country and the war in Darfur is still going on, and an additional war has erupted in Southern Kordofan. “Even the president who is beating the drums of war, has stated that he expects a war between the north and the south,” he told IPS.

The report concludes that the unresolved issues between the north and south will not end on Jul. 9 and it invites the international community to examine its policies towards Sudan to prevent the birth of two states with more problems than prior to the CPA through continuing its engagement in negotiations between both states to ensure “peace, prosperity and stability in the region.”

Meanwhile, South Sudan prepares for independence on Jul. 8. Hafiz Mohammed, Director of Justice Africa (Sudan) said he did not believe there would be security problems on the day of independence.

“There are threats but they are not based on real challenges. It is fair to say that it is not in anyone’s interest to ruin this day, especially the Southerners who see this as a big day, the day their nation is born,” Mohammed said.

He added that South Sudan had the right to secession. “It is also a sad day, we are witnessing the separation of Sudan. We only hope to see a successful nation in the south,” Mohammed said. He added that he hoped the north would benefit from lessons learned from the secession of the south.

“It should try to protect Sudan from further separations and unite the country.”

Ibrahim Al Grefwi, co-founder of Sudan Unite, a coalition of artists who attempted to raise awareness about the secession and keep Sudan united, said it will be a historical day when South Sudan becomes independent.

“It is a historical day for Sudan and it is also a very sad day. I feel sad and I feel that we have failed to unite the country. We also lost important aspects of Sudan’s rich cultural diversity,” Al Grefwi said.

“People in the north just realized that they lost a huge and an important part of Sudan. The political process marginalised the citizens and they just woke up to find that separation is a reality.”

Simon Monoja from the Centre for Peace and Development at the University of Juba in South Sudan said he believed independence day would go smoothly.

“We have militias of concern s in Unity State and Jonglei but I believe that the event tomorrow ill be smooth because it is a day for all Southern Sudanese, they will all want to celebrate it and have it succeed.”

But not everyone is happy. “I came from the north two days ago, I was there for 2 months. Most of the northerners are gloomy, they are so worried about the inability to predict what will happen after separation is declared tomorrow. I don’t expect celebrations in the north tomorrow.”