BRAZIL: ‘Pacification’ of Favelas Not Just a Media Circus 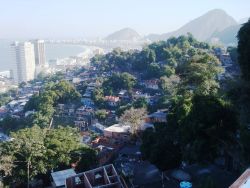 Chapeu Mangueira, one of the favelas where UPPs have been set up. Credit: Fabíola Ortiz/IPS

RIO DE JANEIRO, Nov 17 2011 (IPS) - The “take-over” of Rocinha, one of Rio de Janeiro’s largest favelas, by heavily armed police and military units was seen by some as a media spectacle and by others as part of a successful strategy of regaining state control over an area ruled by armed drug gangs.

Less than three hours after 3,000 police and soldiers occupied the favela or in the south of the city, Rio de Janeiro state Secretary of Public Security José Mariano Beltrame announced the “recovery of the territory” by the state.

“This was achieved without a single shot being fired and – thank God – without a drop of blood being shed,” he said at a crowded press conference, flanked by the high command of the civil and military police and the navy, which all took part in operation “Peace Shock”.

The “show” – as it was described by social analysts like Luiz Eduardo Soares, former secretary of security of Rio de Janeiro state – began before dawn on Sunday Nov. 13.

National and international correspondents, including IPS, flocked to cover what was dubbed Rocinha’s “D-Day.” Some stayed at nearby hotels, while others fended off sleep in their cars, waiting for the dawn “attack.”

The takeover operation, announced with much fanfare several days in advance, blocked entrances and exits from Rocinha at 2:30 a.m., and everyone wanted to be there for what Rio state Governor Sergio Cabral called “a historic day for peace.”

“Rocinha Is Ours” proclaimed the next day’s headlines on the front page of O Globo newspaper, celebrating the reclamation of this neighbourhood of 100,000 people, sprawling precariously up a steep mountainside.

Every detail of the occupation, which met with no resistance from the drug trafficking mafias that ruled the favela for three decades, was caught on film.

Navy tanks entering the narrow twisted alleys with a pink sunrise as a backdrop, naval riflemen in combat fatigues, elite military, federal and civil police squads, drug-sniffing dogs, armoured personnel carriers and helicopters all contributed to the atmosphere of an independence day parade. “I woke up early because of the noise of the helicopters, but everything else was normal,” a woman living in Rocinha, who preferred to remain anonymous, told IPS during the operation.

After years of being under the control of drug gangs and corrupt police, frequently their accomplices, residents are wary.

“I don’t know how long they – the occupiers – are going to stay here,” vendor Edson Pereira told IPS.

Some local people fled to relatives’ homes elsewhere until the invasion was over. Others continued to walk about calmly, indifferent to the heavy military presence.

“The helicopters overhead remind me more of (U.S. filmmaker Francis Ford) Coppola than of Vietnam. The sound, with theatrical fury, underscores the futile choreography of a non-existent war,” Soares remarked on his Facebook page.

But Michel Misse, head of the Centre for Studies on Citizenship, Conflict and Urban Violence at the Federal University of Rio de Janeiro, told IPS: “This is a de facto intervention that is seeking to reclaim and restore control over this area that was held by drug traffickers.

“Of course it is exploited by the media, but that isn’t the main thing. It’s an action that is part of an ongoing policy of occupation,” he added, referring to the “Police Pacification Units” (UPP) introduced in Rio in 2009.

The UPPs form part of a new security strategy that provides for a permanent community policing presence as well as services and projects for social improvement and infrastructure in favelas, replacing the traditional policy of head-on warfare on the drug gangs.

“Drug trafficking does not vanish when pacification comes, but armed drug trafficking and its control over the population does disappear,” Ignacio Cano, coordinator of Rio de Janeiro State University’s Laboratory for the Analysis of Violence, told IPS. “On a smaller scale, drug dealing continues, as it does in Denmark or any other part of the world.”

But “the shoot-outs, the violence, and territorial control are eliminated,” leaving a less harmful manifestation of the drug trade, according to Cano.

The occupation of Rocinha will make way for the nineteenth UPP, completing a security cordon around the neighbourhoods where stadiums and other infrastructure for the 2014 football World Cup and the 2016 Olympics are being built.

That is why some people are concerned that the “pacification” approach may merely involve short-term opportunistic clean-ups rather than a long-term strategy.

“Pacification or showbiz? It is both,” said Cano.

“The occupation is a show in the way it’s being treated, but at the same time it’s part of a pacification strategy,” said Cano, who added that Rocinha has always been “a powerful symbol” of territorial domination by drug gangs.

The location of the favela, between the southern and western sectors of the city, was also ideal for distributing drugs in the wealthier neighbourhoods.

“However, I’d rather political capital were made out of this kind of occupation than out of the violent invasions of the past, when there were up to 20 killings in a single day,” he said.

Occupation plans are announced in advance in order to protect innocent lives. But in the case of Rocinha, there was an additional feature: a prior stake-out of drug traffickers, which resulted in the arrests of three bosses, one of whom attempted to flee the slum escorted by a group of corrupt police officers.

Cano said the government should select the next areas for pacification “by their levels of violence,” and not by their tourist appeal or location in the midst of wealthier neighbourhoods on the south side of the city, like Rocinha.

But in Misse’s view, the fact that favelas were initially selected for pacification based on their size or their relation to future international sporting events “does not detract from the importance” of the process.

“It was a matter of doing that, or nothing at all,” he said, adding that it “is difficult” to provide UPPs throughout the city, which would involve a vast number of police that “no budget can pay for.”

There are some 750 favelas with 1.5 million people in Rio de Janeiro, about one-third of the total population of the city proper. The goal is to pacify 40 of them by 2014.

Julita Lemgruber, director of the Centre for Security and Citizenship Studies at Cándido Mendes University, does not deny that UPPs may be “an instrument for the political advancement of the governor.”

But she told IPS that they are also “a real attempt to neutralise the absolute power wielded by drug traffickers in some communities.”

Lemgruber is critical of the army’s involvement in the occupations, and questions why there is not a greater emphasis on combating police corruption. But she says she does not “demonise” the UPPs, as some experts do.

“When I interview people in the pacified favelas, I find that they feel relief to be freed from the permanent risk of being hit by a stray bullet in the crossfire between the police and the criminals. I cannot be opposed to these changes,” she said. END/IPS/LA IP HD CV FS/TRASP-VD-SW/FF/11)