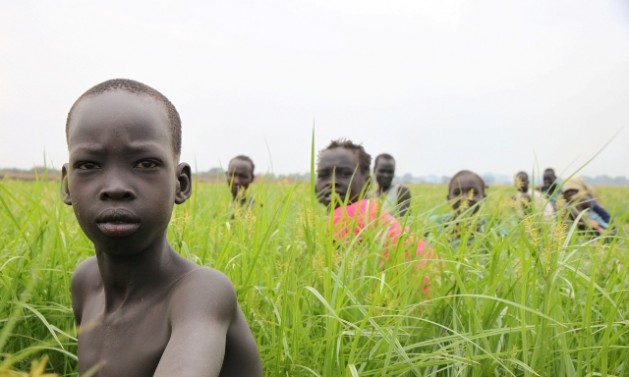 Red (8, foreground) and his friends are weeding in a sugarcane field on the Karuturi farm. Credit: Philipp Hedemann

ADDIS ABABA, Nov 12 2011 - Kneeling in the middle of a sugar cane field in blistering 40 degree heat, a young boy is digging up weeds while an Indian worker stands over him to make sure he does not miss any. Red is eight years old and earns 73 pence for one day’s work – less than the cost of using pesticides.

By exporting food produced by child labour in Ethiopia, an Indian farm manager hopes to earn millions within three years. “It’s still total wilderness here, but we will soon start growing sugar cane and palm oil and everything will look tidy,” explains Karmjeet Singh Sekhon as he drives in a Toyota 4×4 through the burning bushland on his farm.

The 68-year-old Indian is the manager of a huge farm, which covers an area of 100,000 hectares in Western Ethiopia. Soon he wants to farm 300,000 hectares, an area bigger than Luxembourg.

Since 2008 there has been an unprecedented rush to secure farmland in Africa, South America and Asia. This is a result of the rise and fluctuation in food prices on world markets, which has seen food riots in a number of countries. Countries such as India, China and the Gulf states want to feed their growing populations, but are also looking to position themselves in the race to produce bio-fuels.

The World Bank says 45 million hectares of farmland were leased in 2009 – up from only four million a year between 2006 and 2008. It is estimated that by 2030 another six million hectares will be leased annually in developing countries, two-thirds in sub-Saharan Africa and South America.

“These large land acquisitions can come at a high cost. The veil of secrecy that often surrounds these land deals must be lifted so poor people don’t ultimately pay the heavy price of losing their land,” said former World Bank managing director Ngozi Okonjo-Iweala.

In the world’s thirteenth poorest country, the race for the country’s most productive agricultural land has only just begun and the social and environmental consequences are unforeseeable. According to the U.N., 4.5 million people in Ethiopia are currently in need of aid as a result of a devastating drought. The majority of the food aid is imported from abroad.

“No problem,” says farm manager Sekhon. “Some parts of our production remain in the country, and through the export Ethiopia gains hard currency to buy at the world market.”

There is no law in Ethiopia to ensure that a certain percentage remains in the country. Karuturi marketing and logistics boss Birinder Singh makes no secret of the fact that his company is commercially orientated. They will sell to those who pay most, whoever that may be.

Eighty-five per cent of Ethiopia’s population of 80 million live off the land, and little has changed over the past 100 years: most of the tiny fields are still worked using ox-drawn ploughs and the yields are low.

The government hopes that leasing farmland to foreign investors will lead to a wave of modernisation. According to the Food and Agricultural Organisation, food production needs a 70 per cent boost between 2010 and 2050 to meet global needs.

The government has now assigned 3.6 million hectares to foreign and domestic investors. One hectare of land costs between six and 231 dollars a year to rent, and the contract periods are between 20 and 45 years. Critics say the developing world is being sold off.

But Ethiopian Prime Minister Meles Zenawi rejects the attacks as “ill-informed” or even “ill-intentioned.” “We want to develop our land to feed ourselves rather than admire the beauty of fallow fields while we starve,” Zenawi said.

It is not surprising that the Ethiopian government has become the darling of international agribusiness investors. “There is plenty of good land, enough water, a cheap labour force, and a stable government that ensures law and order”, says Karuturi’s Singh.

According to Esayas Kebede, head of the state agency which is responsible for the land leases, Ethiopia benefits in many ways from the deals. “By exporting food, we will receive dollars, the farms provide jobs, they import know how, they will help us to boost productivity and therefore to improve food security,” says Kebede.

But many local farmers are not convinced. Ojwato is one of them. It only takes him a few minutes to cross his two acre field on foot, while Sekhon takes several hours to cover his by jeep.

The idea that his neighbour’s harvests are being exported while he and his country regularly receive food aid makes Ojwato angry. “The foreigners promised to bring electricity, water and hospitals. But in the end only a few of us have worked in their fields and the pay was poor,” the farmer says.

“Nobody is forced to work on the farm,” Kebede says. However, many children labour on the fields.

Though his family could use some extra money from child labour, Ojwato forbids his children to work on the Indian farm. One day they shall become doctors, teachers or engineers, he says. But therefore they need to go to school, instead of working on the fields.

Not all parents are as far-sighted as Ojwato: “Sometimes only five out of 60 students are attending class. The others are working at the fields,” says Tigaba Tekle, deputy headmaster of a school near the Karuturi farm.

Officially, only uninhabited land is used for the giant farms, but human rights groups fear that people are forced to leave their land. As a matter of fact, a state-run relocation programme is currently taking place in Western Ethiopia.

According to the government, there is no link between the relocation and the farm projects; everybody moves voluntarily. Human right groups doubt this, and the author was obstructed several times during the research for this article. The official reason given was: “We don’t want you to gather politically unwanted information.”

As well as human rights organisations, environmentalists also have a problem with the farms. Some four decades ago, 40 per cent of Ethiopia was covered by forest, but today it is less than three per cent – and the bushland in Gambella is burning.

Farm manager Sekhon does not hide his lack of interest in environmental concerns. For him, it is important to develop the farm, and he is behind his ambitious schedule. To catch up, little Red and his friends must continue weeding.