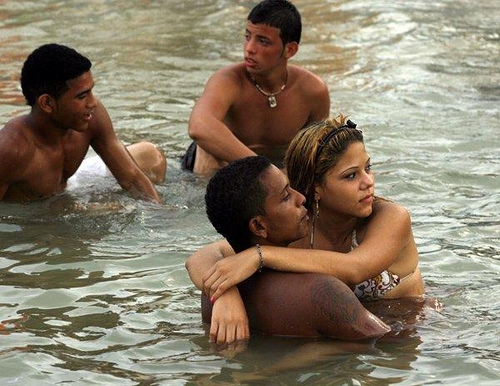 HAVANA, Nov 4 2011 (IPS) - At 19, Liz Sandra Falcón had never imagined that every decision she made could have an impact beyond her own life: not only on people close to her, but on Cuban society itself, and even – although it might seem like an exaggeration – on global tendencies.

The expression “each person counts” went from being a slogan to being part of her daily life. “It was like a door opening,” Falcón, a second-year student at the Cuban Higher Art Institute’s Faculty of Audiovisual Media (FAMCA), told IPS. Falcón, along with her classmate Celia Suárez, designed a short video called “Child’s Play”, which won first prize in a contest organised by FAMCA, the United Nations Population Fund (UNPFA) and the Cuban Foreign Trade and Investment Ministry.

Another 46 ideas were presented in the contest for TV spots in Cuba as part of the 7 Billion Actions campaign carried out by UNPFA worldwide to mark the birth of the seven billionth human being on the planet, on Monday Oct. 31.

“Participating helped me to be more aware of all the problems, including some I had never thought about – the world population, youth, aging, and environmental health – and to see those problems in our everyday lives,” said Falcón, who said she was sure she would draw on this newfound awareness “in any future work I do.”

The awards ceremony for three of the public service announcements, which are now being shown on state television, was one of a number of activities on the island, including the presentation of the UNPFA State of the World Population 2011 report and lectures on specific aspects of the situation in Cuba. “Cuba is proof that the limitations on developing economies are not necessarily an insurmountable obstacle to progress in the areas of health, demographic change and well-being,” Jesús Robles, international coordinator for UNPFA programmes, told IPS.

Robles said that in a world marked by disparities, this island nation is proof that “inequality can be combated if the political will exists to do so.” He also recalled the position Cuba took at the 1994 International Conference on Population and Development in Cairo.

Having worked for sexual and reproductive health since the 1960s, the Cuban government defended then – as it does today – people’s right to decide on the number and spacing of pregnancies.

As the result of policies implemented for decades, Cuba has “a socio-demographic development level similar to that of the industrialised countries,” Juan Carlos Alfonso, director of the Centre for the Study of Population and Development of the National Office of Statistics and Information (ONEI), told IPS. “The key demographic indicators for measuring a country’s evolution are the rates of population growth, fertility and mortality. In those three indicators, Cuba is similar to the developed countries and surpasses those of Latin America and the Caribbean,” he said.

Citing the 2011 State of the World Population report, Alfonso highlighted certain indicators that have a bearing on the fact that the island nation ranks 53rd on the Human Development Index drawn up by the U.N. Development Programme (UNDP).

He noted, for example, that Cuba has a fertility rate of 1.5 children per woman, life expectancy of 79 years, and infant mortality among children five and under of 5.8 per 1,000 live births, similar to the rates seen in many industrialised countries and far below the average for Latin America and the Caribbean, of 22.4 per 1,000 live births.

After having the opportunity to participate and get her voice heard, Falcón has a new awareness about questions like sexual relations, protecting against sexually transmitted diseases, preventing pregnancy and deciding when is the best time to have a baby.

To hear young people, foster their knowledge and provide them with options to participate are, according to experts, a pressing need for Cuba, which is facing an accelerated process of aging as a result of several decades of low fertility and mortality rates and high emigration.

The National Fertility Survey conducted by the ONEI in 2009 found that the average age for first sexual intercourse in Cuba was 17 for women and 16 for men. Although people are universally aware of contraception methods, they tend to have their first relations without protection, and abortions are routine.

In addition, the survey found that couples are often formed at early ages, that sexually transmitted diseases spread due to cultural patterns that inhibit the use of condoms by stable couples, that teen pregnancy is common, and that pregnancy is often postponed by women or even ruled out as an option.

“The roles of young people are decisive in a society with social guarantees and strong community and family networks. They play an important role not only as receptive individuals who are full of energy but also, and above all, as participants,” said Rolando García, assistant representative of the UNPFA office in Cuba.