UNITED NATIONS, Nov 25 2011 (IPS) - Involving women in decision-making and resource management is a basic necessity for any effective plan to address the multi- layered and life-threatening consequences of climate change, says the head of UN Women. 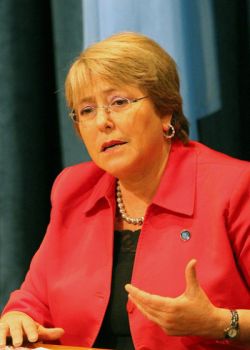 Looking to Durban, South Africa, where world leaders will discuss future climate change policies Nov. 28 to Dec. 9, Michelle Bachelet is calling on leaders to ensure “that words become reality”, for full participation of women at all levels of the negotiations, and an “outcome that responds to women’s needs and advances women’s empowerment”.

Women and girls – who make up the majority of the world’s poor – have much more limited access to information and financial resources than men, a fact which exposes them to a higher risk of severe climate change impacts, underscored Bachelet.

In devising and implementing financial instruments like the Green Climate Fund, she urges government delegates, international experts and civil society actors gathering in Durban to retain a gender- sensitive approach to improve accountability.

“Climate financing should be equitable and respond to the urgent needs of all members of society, and gender issues must be taken into account at all stages of the financing process,” she told IPS.

The risk of injury and death from natural disasters – such as floods, droughts and landslides – is systematically higher among women and children, she explained. “In inequitable societies, more women than men die from disasters.”

Especially rural women and girls in developing countries are “carrying a particularly heavy burden of climate change” due to environmental stress and their responsibility to secure water, food and energy for cooking and heating.

They spend many hours a day collecting and transporting water, for example, and this is becoming much more difficult in areas impacted by drought, Bachelet pointed out. “For many girls, this means missing out on school and losing an education.”

Between 1980 and 2010, the average number of extreme weather events more than doubled, underscoring the “urgent need to invest in women and girls and advance gender equality”.

Bachelet talked with IPS U.N. Correspondent Rousbeh Legatis about women’s needs in the context of climate change and how to reshape global climate policy-making.

Q: What are women’s needs and do they have a particular role when it comes to climate change and adaptation strategies? A: Women need equal opportunities and equal rights. This includes the right to participate in decisions related to climate change. Women need to be actively engaged in the processes that affect their lives – from urban planning that aims to build resilience of communities to climate shocks, to the delivery of services such as clean water and irrigation plans in a rural community, to the development of clean- energy technology that aims to reduce green-house gas (GHG) emissions.

Far too often, women are left out of consultations. They are not at the decision making table and their absence makes programmes and strategies less responsive and effective. There is empirical evidence to show that women’s involvement in decision making and the management of resources can have positive environmental outcomes.

Evidence from India and Nepal suggests that women’s involvement in decision-making is associated with better management of community resources such as forests. A study of 130 countries found that countries with higher female parliamentary representation were more prone to ratify international environmental treaties.

In addition to engaging women in decision-making, climate strategies need to integrate gender considerations that are specific to each situation. In rural Africa, for instance, consideration must be given to the needs of women farmers, who are responsible for 60-80 percent of food production as well as the nutrition of their families. Too often, women farmers lack access and rights to property, land and credit and this reduces crop yields and threatens food security.

The Food and Agriculture Organisation points out that eliminating the gap between men and women in access to agricultural resources and inputs would raise yields on women’s farms by 20-30 percent and increase agricultural production in developing countries by 2.5-4.0 percent, which could in turn reduce the number of undernourished people in the world by 12-17 percent or 100-150 million people.

Q: Do you see enough awareness of the specific situation of women, and the involvement of women’s perspectives and experiences when policy-makers enter into discussions about how to confront climate change and how to adapt to changed environmental circumstances? A: Awareness has definitely increased on this issue, especially among leaders and policy-makers. We are seeing changes in attitudes and policies. U.N. Secretary-General Ban Ki-moon urged women’s equal participation in addressing the challenges of climate change in 2009, some governments are talking about the gender dimensions of climate change and gender is included in the 2010 Cancun Agreement.

The next step is ensuring that words become reality on the ground and women participate in decision-making processes. If we consider climate financing, for example, gender considerations have a history of not being systematically integrated in their design.

In response, UN Women is working with partners to ensure that the new Green Climate Fund does not repeat this mistake and integrates gender from the start by including the principle of gender equality in its operations and monitoring of impacts and results.

In addition to the international policy level, women must be fully engaged at the national level, on the ‘home-front’, where national strategies are designed and implemented, budgets are formed, and services delivered to mitigate or adapt to climate change.

Unfortunately, women remain underrepresented in national parliaments and especially in Ministries that are central to decision-making on climate change and sustainability. Globally women occupy only 16 percent of ministerial posts and of these only 19 percent are in finance and trade; seven percent in the environment, natural resources and energy; and a mere three percent in science and technology.

The lack of women’s presence in national decision-making hinders women’s ability to influence policies and budgets. This limits the inclusion of gender considerations in environmental management, sustainable development and the climate change agenda.

Q: What is needed to enhance women’s participation in climate policy- making and protection from adverse climate change impacts? A: It is important to support women’s organisations to participate in consultative processes for the development of climate change strategies, especially at the local and national levels. This requires outreach to affected groups and targeted efforts to ensure inclusivity. Within formal processes, special measures such as quotas, even if temporary, can provide the impetus needed to increase women’s participation and leadership.

We also need better sex-disaggregated data to inform gender responsive climate policies. All too often that information and data cannot be found and this is blocking progress in disaster risk management, urban planning and agricultural reform.