AFRICA: Watermelon Farming in a Drought 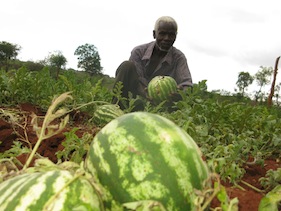 DURBAN, South Africa, Dec 1 2011 (IPS) - On a Sunday evening, a track loaded with 10 tonnes of watermelons leaves Geoffrey Ndung’u’s homestead in Kanyonga village in semi-arid Eastern Kenya. It travels past a village shopping centre were people have formed a queue to receive food aid because of a prolonged drought in the area.

While his fellow villagers are feeling the effect of the drought, Ndung’u has turned it into a business and his harvest will earn him 2,000 dollars, from farming just 1.2 hectares of dry land.

“It is now two years since I learnt how to co-exist with the drought, thanks to support from ActionAid International and the Ministry of Agriculture,” says the 56-year-old father of five.

A host of humanitarian organisations in partnership with the government have undertaken to train people from drought-stricken areas in Kenya on how to take advantage of worsening conditions. “We have introduced a new project known as ‘Drought Coping Training’, where we train members of communities from arid and semi-arid areas on how to co-exist with the ever-changing climatic conditions,” says Francis Njoroge, the officer in charge of ActionAid International – Kenya in the larger Embu region.

The need for finance for adaptation measures like this forms part of the African position at the ongoing 17th Conference of Parties (COP 17) under the United Nations Framework Convention on Climate Change (UNFCCC) in Durban, South Africa.

“Africa’s commitment to addressing the change is evident across the continent. We have seen people engage in adaptation projects from the grassroots at personal and community level. Yet we are sure that this can be scaled up to national levels and eventually continental levels,” said the Permanent Secretary for Kenya’s Ministry of Environment and Mineral Resources Ali Mohammed.

Kenya’s constitution recognises the importance of protecting the environment. It stipulates that farmers should ensure that at least 10 percent of their farms have trees in order to increase forest cover, while at the same time addressing the issue of climate change mitigation.

“All we need to see in Durban is for the developed world – which consists of countries that hold the biggest responsibility for greenhouse gas emissions – commit themselves to providing funds for adaptation measures, capacity building and technology transfer,” added Mohammed.

The Angolan delegation to COP 17 has also called for funding for adaptation projects. The country wants to focus on agriculture as a means of providing food security, employment and a source of income and is looking for innovative methods of food production that can withstand the changing climatic conditions.

Angola also has an action plan for alternative sources of energy.

“We are championing for the use of alternative sources of energy, especially in rural areas, in order to save forests. We are at the same time encouraging farmers to engage in sustained charcoal farming, so that trees are grown specifically for fuel production,” said Abias Huongo, the head of Angolan delegation. Angola is also seeking funding for climate monitoring mechanisms that will enable the government to put in place early warning systems for climate-related disasters.

However, the African delegation noted that the continent might fail to make further progress if there is no commitment from the developed countries to finance adaptation projects.

Head of Programmes at the Third World Network – Africa, Tetteh Hormek, echoed his sentiments. He said that the developed world should come out clearly to support developing countries to adapt to climate change.

“As the Kyoto Protocol enters into the second phase by the year 2012, we are calling upon the developed world to cut down on carbon financing mechanisms, which are like a double edged sword,” said Hormeku.