DURBAN, South Africa, Dec 9 2011 (IPS) - No one is happy late Friday at the very contentious U.N. climate talks that went into extra time on Saturday. As the lights flicker on a rainy night here, the partial power failure echoes the failure of the multilateral process, according to civil society and some countries. 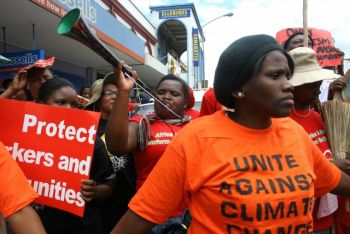 “If countries agree to the text as it stands, they will be passing a death sentence on Africa,” said Nnnimmo Bassey, chair of Friends of the Earth International and a Nigerian activist.

And yet African countries and other vulnerable countries might go along because they will be bullied or bribed, said Bassey.

When Bolivia stood up to the United States at the Copenhagen climate meet in December 2009, Washington pulled its development aid the next year.

“Delegates must show that they care about the devastation across the continent and small island states …. or are they going to yield to arm twisting because a few dollars are being hoisted about,” Bassey said.

So far African countries are not blocking an agreement, he told IPS.

Thursday night, a select group of ministers and senior delegates from 28 countries met until four a.m. to work on the key components, but failed to reach a consensus. The following day, when all countries began to review the details, wide disagreements arose over many of the same issues.

“Countries won’t agree to a second period of the Kyoto Protocol until the next COP (conference of parties),” said Pablo Solon, former U.N. ambassador from the Plurinational State of Bolivia and former chief negotiator at the Cancun COP 16, the last meeting prior to Durban.

“Kyoto will lose its heart…it will become a zombie,” said Solon, who has seen the confidential details that weren’t released publicly until late Friday night.

Countries will “only take note” of the science-based need to increase their emission commitments well before 2020. In addition, the key phrase “legally binding agreement” that nearly every country wanted is absent, he said.

“The U.S. is the big winner here…This will lead us to a future with more than four degrees of warming,” Solon warned.

The world has months to curb emissions from burning fossil fuels before the critical benchmark of two degrees Celsius of warming will be impossible to stay below. Delay a few years, and the extraordinary emission cuts needed could bankrupt the world’s economy and reverse development gains in most countries, climate experts have warned.

This COP is a” disastrous failure”, said Praful Bidwai, a political columnist and social scientist from India who has just published a book on the politics of climate change. It would be far better for the talks to collapse than to cobble together a “greenwash deal” that pretends to be addressing the climate crisis, he added.

“The U.S. can’t be trusted at these talks. They will never agree to anything legally binding,” Bidwai told IPS.

The U.S. was the chief architect of the Kyoto Protocol during climate talks in the early 1990s, but never ratified the treaty even though it only called for emission reductions of five percent by next year. At the same time, Canada supported and ratified Kyoto but did nothing to comply, so its emissions soared 24 to 28 percent during the intervening years.

Europe is little better, even though its emissions appear have gone down more than 20 percent. Much of that is due to the collapse of the Eastern European bloc during the 1990s, and the shift to importing its goods from elsewhere and thus avoiding emissions. Spain, Italy, France and others have had major increases, Bidwai said.

If international trade and local consumption of imported goods were accounted for, the CO2 emissions in Germany and France would have increased by more than 20 percent during the last 20 years, according to two new studies.

Similar estimations are true for all the major industrialised countries.

“It could all fall apart. Many low-income developing countries are very angry,” said Alden Meyer, director of strategy and policy for the Union of Concerned Scientists.

These are the world’s poorest countries, like Mali and small Pacific islands.

At Durban, Canada and the U.S. were awarded the “Colossal Fossil” prize by civil society for doing the most to block progress on a new climate agreement.