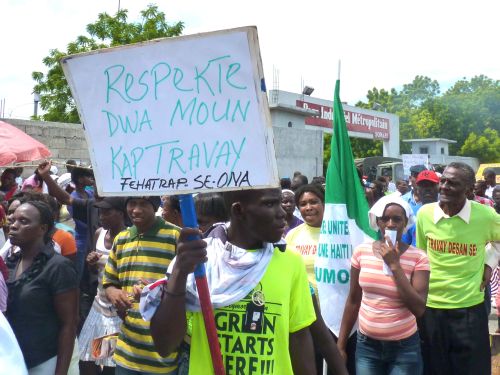 A demonstrator supporting a unionisation campaign in October holds a sign that says, "Respect the rights of working people." Credit: Ansel Herz/IPS

PORT-AU-PRINCE, Dec 20 2011 (IPS) - Ever since being elected earlier this year, Haitian President Michel Martelly and his team have been betting Haiti’s reconstruction on foreign investors.

“We are ready for new ideas and new businesses, and are creating the conditions necessary for Haiti to become a natural and attractive destination for foreign investment,” the new president said at a meeting in New York City last fall.

“The window of opportunity is now,” an aide added. “Haiti has a new president and a new way of thinking about foreign investments and job creation.”

The new government’s showcase project is the Caracol Industrial Park, being built with 124 million dollars of U.S. taxpayer funds, and another 55 million dollars from the Inter-American Development Bank.

While the president might be new, and there might be new actors on the scene, there’s not much new about the plans. A recent report from the Haitian investigative journalism partnership, Haiti Grassroots Watch, shows that the focus on assembly industries is not such a “new” idea.


Ever since Nelson Rockefeller visited dictator François “Papa Doc” Duvalier, Washington has been pushing Haiti to offer up its “comparative advantage” of rock-bottom wages. Papa Doc vowed to create the “Taiwan of the Caribbean” and his heir, Jean-Claude “Baby Doc” Duvalier, said he would carry out an “economic revolution”.

In the early 1980s some 80,000 people were stitching baseballs and piecing together electronics for mostly U.S. companies.

The sector atrophied after the dictatorship. Many foreign companies picked up and left as popular unrest increased. But the national industrial park SONAPI stayed open and the governments that followed have continued to court foreign investors, counting on the needs of multinationals to guide the country’s economic development.

Economist Camille Chalmers told Haiti Grassroots Watch (HGW) that the industries did create jobs in the past, but added, “if we can say SONAPI created 60,000 jobs, we can also say it attracted two million unemployed people (who emigrated from the countryside)… We all know the conditions in Cité Soleil (where the capital’s poorest live). People live like animals.”

Nevertheless, Haitian governments have continued to bet on assembly industries.

In 2002, then-President Jean-Bertrand Aristide government signed into law legislation granting foreign investors 15-year tax holidays and other benefits. In 2003, Aristide himself traveled up to northeast Haiti to break ground for the CODEVI free trade zone.

More recently, in an exclusive interview with HGW, Luc Especa of the government Free Trade Zone office explained the strategy this way:

Chalmers, who heads the Haitian Platform for Alternative Development, deplores what he calls incredible “short-sightedness” and lack of vision.

“They are betting Haiti’s future on slave labour,” he said. “I think it is more than just an error. It’s a crime, because in general assembly industry factories don’t bring development, they don’t bring prosperity, and they won’t help us get out our current situation.”

U.S. taxpayers subsidise “sweatshops” and the “race to the bottom”

The first company to sign up for the new Caracol Industrial Park was South Korean textile giant Sae-A which, according to media reports, produces 1.4 million pieces of clothing a day in its 20 factories. Sae-A ships to K-Mart, Wal-Mart, GAP and other major U.S. clothing chains and has promised to invest 78 million dollars.

“Investors still do not believe or understand the value and potential of Haiti as we do,” Kim Woong-ki, chairman of Sae-A, told the Associated Press after a ceremony inaugurating construction at the Caracol park last month.

For Sae-A and for the Dominican companies stitching clothes in Haiti, the potential is as clear as day. Post-earthquake U.S. legislation called “HELP” (Haitian Economic Lift Program”) allows Haiti-based companies to ship clothing duty-free into the U.S. until 2020.

Sae-A will be well-positioned with a new mega-factory and the cheapest labour in the hemisphere: Five dollars a day or less, which qualifies as a “sweatshop” rate by any standards. [See story #1]

And what remains unspoken – both in Haitian and foreign coverage – is the fact that the U.S. taxpayer-subsidised factories in Haiti likely result in lay-offs for workers in countries with higher wages, including the U.S., which has lost over 700,000 textile and apparel jobs since 2000.

Caracol site and the environment

The area chosen for the country’s new 243-hectare Caracol Industrial Park is near the coast, halfway between the northern cities of Cap- Haitien and Ounaminthe. It was recommended by a U.S.-based consulting firm hired by the Ministry of Economy and Finances (MEF), Koios Associates. Koios’s September 2010 study said the site was ideal, in part because the land was “devoid of habitation and intensive cultivation”.

Except it wasn’t quite “devoid”. The Caracol site was home to 300 farming plots.

But last January, without notice, contractors put fences around 243 hectares, mostly lands that had been leased by peasant families from the state for decades. Most of the farmers have been paid for their lost crops, and many have been offered replacement land, but in less fertile areas.

Putting an industrial park – which will attract between 20,000 and 200,000 new residents – in the midst of a fertile area is not necessarily going to contribute to Haiti’s “sustainable development”, despite government claims to the contrary, economist Chalmers notes. Haiti has gone from virtual food self-sufficiency three decades ago to importing over 60 percent of its food. Taking more land out of production will only increase that figure.

“Before 1992, 90 percent of our cereal needs were met here in Haiti. That’s all changed. The country has become more dependent,” Chalmers told HGW. “That means food has become more expensive as salaries have gotten lower. You get paid in gourdes, and you consume in U.S. dollars. That is terrible for the country… it is sinking us deeper into dependency.”

Perhaps just as disturbing is the fact that the park is being set up in the middle of one of Haiti’s major watersheds. But, according to the Koios study, this is precisely the reason the site was chosen, because “it is capable of absorbing a large volume of treated water.”

Despite being slated to be home to Haiti’s first modern textile mill – which will be using toxic dyes – the Caracol park is being built only about five kilometres from the Caracol Bay, home to some of the country’s last mangrove forests and coral reefs.

But – by its own admission – the Koios firm didn’t consider any of these factors, nor did it consult with the Ministry of the Environment.

In its second study, on environmental and social impacts and dated in May, 2011, Koios admitted: “The study process and the section of sites was not accompanied by extensive environmental, hydrologic or topographic research.”

Koios also claimed it was not aware of the “the complex and precious ecosystem of the Caracol Bay” when it recommended the industrial park site, despite the fact that there are numerous public documents on plans to turn the bay into a marine park. Koios also recommended that – due to the “new” information – perhaps the government ought to consider moving the site.

Not surprisingly, the study was never discussed by the media. The industrial park site was not moved. And, despite repeated requests, neither the Ministry of Environment nor the Ministry of Economy would speak to HGW about these documents, the Koios recommendations, or the choice of Caracol.

Since then, even though most of the documents are available to the public, no major media outlet has discussed them or the considerable environmental risks related to the bay, the water table, the inevitable population boom and associated water and sanitation challenges.

*This story is the second of a two-part series on the pitfalls, disadvantages and risks of a major new industrial park and the Martelly government’s focus on luring foreign investors to Haiti. It was adapted from a longer investigative series by Haiti Grassroots Watch (HGW).