Kristin Palitza spoke to REGINE GÜNTHER, climate protection and energy policy chief at the World Wide Fund for Nature, about the dangers climate change poses to security and livelihoods.

DURBAN, South Africa, Dec 9 2011 (IPS) - Despite the high risk, it remains difficult to convince politicians to take immediate action to prevent further climate change and make available the necessary funds to do so. Scientists have warned repeatedly of the effects of climate change – if governments do not act fast, they will cause an irreversible catastrophe. 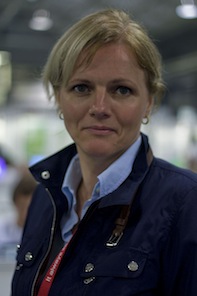 IPS spoke to Regine Günther, climate protection and energy policy chief at the World Wide Fund for Nature, about the dangers climate change poses to security and livelihoods.

Q: What are the consequences if the 17th United Nations climate change summit in Durban ends without firm results and targets? A: There are several scenarios. If countries stick to the voluntary commitments to reduce carbon emissions they have made during the last two summits in Cancun and Copenhagen, we will see an increase in average temperatures by between three and four degrees Celsius. If they manage to start a process in Durban that will lead to higher emission reduction targets by 2020, we could succeed in not going above a two degree Celsius rise.

But at the moment, it doesn’t look good. If we continue like before and don’t even implement the voluntary pledges, we will reach a dangerous temperature rise of six or seven degree Celsius.

Q: What happens if average temperatures increase by more than two degrees Celsius? A: An increase of two degrees Celsius already has negative effects. If we go beyond it, climate change will become dangerous. Glaciers will melt, up to three billion people will suffer from severe water shortages, mainly in the developing world, we might lose up to 30 percent of our biodiversity, droughts will lead to food insecurity, large regions will be permanently flooded, including small islands, and so forth. That’s why climate change is not only an environmental problem. It’s a threat to livelihoods and economies.

Q: Everyone is talking about the drastic effects of climate change in developing countries. What will be the effects on the global North? A: Think back to the major heat wave in Europe in 2003. It was a very hot summer (with several people dying from heat strokes). If we don’t get climate change under control, the summer of 2003 will be regarded as a normal summer in 2040. By 2060 it will be regarded as a cool summer. The United States have also felt the impact of changing weather patterns this year, with an unusual number of hurricanes and storms. So yes, the industrialised world will also experience a lot of change and will have to adapt.

Q: Will masses of people in developing countries have to migrate, as some scientists predict? A: That is very possible. And this will effect the global North as well. If droughts and hunger increase in the South, people will be unable to continue living there. If there are thousands and thousands of climate migrants, the question is of course who will offer them refuge. Many will look expectantly to the North.

Q: When will it be too late to act? A: If you measure the dangers of climate change based on the two degree Celsius limit, we will have to reach the peak of global carbon emissions within this decade. Scientists say that a drastic reduction of CO2 emissions by 2020 would still be an option, but the very last one. I believe, by 2020 it will be too late. Nonetheless, we have to continue making every effort possible, because it makes a big difference if we live in a world that is two, five or six degrees hotter.

Q: Why do you believe emission reductions by 2020 will be too late? A: The later global carbon emissions peak, the steeper the necessary downward trend of reductions needs to be. Achieving this will not only become very expensive but also extremely difficult. There will be a point in time, when not enough can be done to keep climate change under the two degree Celsius limit. Once we have reached that limit, which means that a certain amount of greenhouse gases sit in the atmosphere, the process of trying to lower temperatures will take decades, because the atmosphere reacts to changes only slowly.

Q: Why does it remain so difficult to convince politicians to act, despite the horror scenarios? A: The biggest drivers for man-made climate change, the coal, oil and gas industries, are the biggest beneficiaries of our current industrialised economies. They work with major lobbies and large amounts of money against the trend to reduce their share of the economy.

Q: Do climate sceptics influence governments’ hesitant commitment? A: In the U.S., climate sceptics have massive influence in the debate. In Europe, science has the top hand. That climate change is largely man-made is widely accepted. People have understood that something can be done about it and are more willing to take action. In other countries in the world that’s unfortunately not the case.

Q: How expensive will it become to fight climate change if governments continue postponing mitigation and adaptation measures? A: According to British economist Nicholas Stern, taking no action will cost up to twenty times more than taking immediate action. Countries like Germany and U.S. have been able to mobilise billions of dollars last year to bail out their banks.

Now, they are trying to tell us that the international community is unable to mobilise 100 billion dollars within a decade to finance climate change adaptation in developing countries. If countries would make climate change as much a priority as the financial system, they would reduce other expenditures to drum up the needed funds. Exactly like they did during the economic crisis.