BUENOS AIRES, Dec 19 2011 (IPS) - As Mercosur foreign ministers gather this Monday ahead of Tuesday’s summit of heads of state, political harmony is growing between the governments of member countries, although free trade not only remains a pending challenge but is increasingly facing pitfalls. 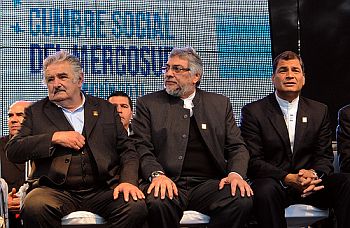 Far from taking advantage of the global crisis to boost intra-bloc trade, the countries of the Southern Common Market (Mercosur) – Argentina, Brazil, Paraguay and Uruguay – have erected tariff barriers. The two largest economies, in particular, are blocking the flow of goods from the smallest.

Argentina and Brazil are on one side of the dispute over protectionism, and are increasingly imposing the biggest restrictions on trade, while the much smaller Paraguay and Uruguay continue to push for better access to the markets of their giant neighbours.

In contrast to this division, there is a climate of political unity over Venezuela’s admission as the fifth full member of South America’s biggest bloc. The admission process began in 2006, and now only the Paraguayan Senate is opposing ratification of the Paraguayan government’s pledge in favour.

Uruguayan President José Mujica, who is hosting the summit being held in Montevideo on Tuesday Dec. 20, has proposed changing the 1991 treaty that created Mercosur, in order to remove the hurdle to Venezuela’s entry.

His fellow presidents, Cristina Fernández of Argentina, Dilma Rousseff of Brazil and Fernando Lugo of Paraguay, would agree to a new legal clause that would obviate the Paraguayan Senate’s veto.

Ecuador is also applying for full membership in the bloc.

However, in spite of their political will to accept new Mercosur partners, Argentina and Brazil appear to look the other way on the issue of removing trade barriers, even if the trade goods in question come from member countries with disadvantages in terms of size and economic development.

Argentine economist Gabriel Molteni, a co-author of “20 años después: Logros y desafíos pendientes del Mercosur” (20 Years On: The Achievements and Pending Challenges of Mercosur), told IPS that “beyond the advances in the convergence among the partners, there are restrictions on intra-bloc trade.”

In addition to protection measures agreed in advance for sensitive goods like sugar or automobiles, Molteni pointed to the increasingly frequent use of “non-automatic permits”, where prior government approval is needed for imports, which are invoked to “manage” trade.

The study by Molteni and colleagues, published in the December issue of the Integration and Trade Journal of the Institute for the Integration of Latin America and the Caribbean, shows that while intra-zone trade in the European Union is above 60 percent of its total trade, in Mercosur intra-bloc trade stood at 15 percent in 2009.

“In relative terms, intra-regional trade grew very slowly compared to the bloc’s foreign trade, which grew a great deal, particularly because of the boom in demand for commodities, the main export category of Mercosur partners,” he said.

In Molteni’s view, “government positions have changed, and now free trade is not the only value, but also the ‘mix’ with the internal market, which is given a different degree of importance than it had in the 1990s,” he said.

The vice president of the Brazilian foreign trade association (AEB), José Augusto de Castro, told IPS that “officious, not official” restrictive measures are being applied in Mercosur – but more by Argentina than by his country, he maintained.

The most frequently used measures are non-automatic permits, which “are legal and not protectionist” if imported merchandise is not delayed for more than 60 days, but become a different matter if it is delayed for 90 or 180 days, because that causes the transaction to be broken off, he said.

Perhaps as a strategy to get transnational or Brazilian companies to set up shop in Argentina, that country frequently uses this instrument to hamper imports of household appliances, footwear, agricultural machinery and other goods.

According to the Brazilian association, in some cases permits have been delayed since April – much longer than the two months’ maximum period.

But Brazil also adopts protectionist measures; for instance, it added 30 percentage points to the tax on imported vehicles that do not have at least 65 percent domestic content.

In the view of AEB’s Castro, the fall in international prices for agricultural products and commodities, which are Mercosur’s strong suits for exports, may bring on a large trade deficit that could lead the partners into “protectionist temptations.”

But today, with Brazil’s huge trade surplus with respect to its partners, there is no justification for trade restrictions, he said.

“Relaxing import regulations for its Mercosur partners would not significantly affect Brazil’s trade balance,” said Castro, who added that the obstructions were “the initiatives of particular companies,” rather than of the Rousseff administration.

He recognised that Mercosur could provide an answer to the global crisis currently battering Europe, with the fall in demand from the industrialised world. “It would be possible to grow within the bloc, and so create a small escape valve,” he said.

However, at the moment what is needed is to “give up the requirement of unanimity” in order to gain “freedom of action,” he said.

As an example, Castro mentioned the case of Uruguay, which wants unilaterally to enter into a free trade treaty with the United States and other countries, and of Brazil, which would like to make an individual alliance with the EU.

Nearly 30 percent of Uruguayan exports go to the bloc, mainly Brazil and Argentina, and this has caused it headaches recently because of delays in approvals of import permits by its larger neighbours.

Pressured by exporters anxious about these problems in Mercosur, Mujica will ask on Tuesday for the freedom for Uruguay to negotiate its own accords outside the bloc, according to the local press.

This is consistent with Uruguayan Vice President Danilo Astori’s opposition to protectionism, when he said a few days ago that “the worst thing a country like Uruguay can do in times of crisis, like this one, is to close in on itself.”

Paraguay will also make complaints at the summit. It will ask Argentina to allow passage of electricity from Paraguayan or shared power plants to Uruguay, which could thus purchase energy more cheaply than from the larger partners.

* With additional reporting from Mario Osava in Rio de Janeiro and Darío Montero in Montevideo.