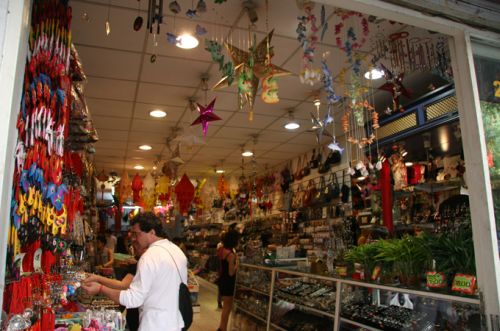 Away from this small urban area, however, China has been not-so- quietly buying up agricultural products, companies and minerals around South America.

“Across Latin America we are seeing that China is having an increasing importance in trade and investment,” Ricardo Delgado, director of Analytica Consulting in Buenos Aires, told Al Jazeera.

“Brazil and Argentina produce and export many raw materials: soy, sugar, meat and corn… China is a very important driver of demand for these commodities.”

Since 2005, China’s development bank and other institutions have spent an estimated 75 billion dollars on financial investments in South America, said Boston University professor Kevin Gallagher. This is, he points out, “more [investment] than the World Bank, U.S. Export Bank and the Inter-American Development Bank combined”.

Chinese private investment, often coming from large state-supported firms that set-up operations in the region or buy local companies, has been about 60 billion dollarrs, Gallagher said.

In the past five years, Bilateral trade between China and South America jumped more than 160 per cent, rising from 68 billion dollars in 2006 to 178 billion dollars in 2010. In Peru, Chinese mining giant Chinalco spent three billion dollars buying “copper mountain” – an entire rock formation containing two billion tonnes of the precious metal. The firm expects a 2,000 percent profit on its investment.

As director of Mercampo, an agricultural consulting firm based in Rosario, Argentina, Gabriel Perez has seen the increase first hand. More trade delegations are coming from China, and tycoons from the world’s second largest economy are eager to invest in agriculture and commodities.

“China has the strategic vision to ensure food security and energy in their country [as they worry] that long-term problems will be the supply of raw materials,” Perez told Al Jazeera. “This is undoubtedly the primary reason for China’s investments in South America.”

Throughout South America’s history, economists and politicians have worried about dependency created by countries exporting raw materials and then depending on industrialised nations for high-end manufactured goods and technology.

“An economy organised around the export of resources often dampens economic diversification and the development of value-added industries, so there is a way in which China could be as much of a problem as the U.S.,” said Gregg Grandin, professor of history at New York University and author of “Empire’s Workshop: Latin America, the United States and the rise the new imperialism”.

China has, however, given Latin American countries a “more diversified set of options to negotiate prices and interest rates” than what the U.S. would offer, Grandin told Al Jazeera.

Raul Prebish, an Argentinean economist and former director of the U.N.’s Economic Commission for Latin America (ECLAC), argued that nations on the “periphery” of world trade were doomed to be primary commodity exporters unless they developed by building a domestic manufacturing base and closing trade links.

“In Brazil, China is an important competitor in low labour cost industries. Chinese prices are low and problems of dumping and subsidised exports are common,” Delgado said. “Our industries are not prepared very well for this competition.”

China is frequently accused of keeping its currency artificially low to boost exports.

Brazil’s real and other South American currencies have risen drastically due to the commodities boom in recent years. Brazil’s former finance minister went so far as to warn of a “currency war” as countries around the world tried to lower their currencies to boost exports.

“You hear lots of complaints from the industrial sector that competition has become very hard, because the exchange rate is misplaced,” Eliana Cardoso, a World Bank economist and former MIT economics professor based in Sao Paulo, told Al Jazeera, adding that she thinks such concerns are minor compared to the country’s growth.

Plenty of economists who do not have strong positions in debates about dependency think it’s wrong to worry about Chinese investment because the terms of trade are squarely in South America’s favour, as countries maintain large trade surpluses with China.

The values of basic products have changed dramatically since the 1960s when “dependency” became a fashionable topic of discussion.

More importantly, Chinese loans, representing the bulk of investment, do not come with the same strings as aid from the International Monetary Fund (IMF) or Inter-American Development Bank, which are seen as Washington’s fiscal agents.

Through the IMF and World Bank, U.S. policy makers demanded privitisation and low inflation rates, often at the expense of growth, on Latin American through the 1970s and 80s, critics say.

Governments in the region have discarded that advice in recent years, looking instead to a mixed economy, in which the state is actively involved in setting monetary policy and managing natural resources. Brazil’s government-backed oil giant Petrobras is the clearest example of South America’s new form of hybrid capitalism.

Critics charge that the IMF offered one set of prescriptions for developing countries: cut social spending, lower inflation at the cost of job creation and raise interest rates. During crisis at home, the fund’s U.S. backers did the opposite, relaying on government stimulus programmes and low interest rates to boost growth.

“Unlike the Americans, the Chinese do not have all sorts of draconian policy conditions on their finance,” Gallagher said. Other experts have echoed this sentiment – China is more concerned with getting the goods, rather than changing the structure of economies with which it trades.

After defaulting on its massive debt in 2002, following street protests and a bitter economic crisis, Argentina settled its debts with the IMF in 2006 and has ignored its advice ever since.

Back in Buenos Aires’ Chinatown, a young Cantonese waitress carried trays of fresh orange juice and sparkling water, chatting in imperfect Spanish to eager Portenos (residents of Buenos Aires) who sit outside in the summer air. While it does not glisten, Chinatown is increasingly becoming fashionable, with young Argentines. Some local libraries even offer free Mandarin language classes, financed with Chinese money, as part of the country’s quiet “soft power” in the region.

In recent weeks, Chinese officials have expressed concerns about an economic slow-down, linked to the crisis in European export markets. That could spell trouble for growth in South America.

“Seventy-two percent of Argentina’s soy goes to China,” Gallagher said. “If China’s demand slows by a few percentage points, you could have an unwinding.”

He worries commodity exporters have put “too many eggs in the China basket”.

*Published under an agreement with Al-Jazeera.