GUATEMALA CITY, Jan 27 2012 (IPS) - After a hearing that lasted more than 11 hours, a Guatemalan court ordered the trial of former dictator Efraín Ríos Montt (1982-1983), who could face up to 30 years in prison if he is convicted of genocide and crimes against humanity. 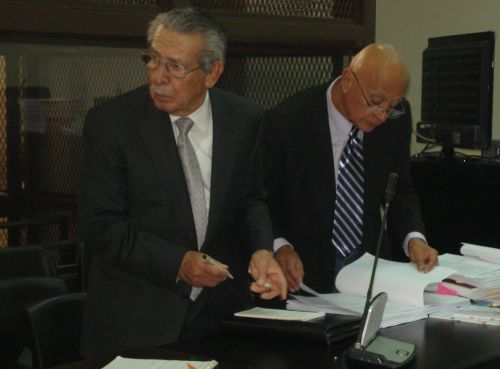 Former dictator Efraín Ríos Montt (left) at the hearing in court, next to his lawyer. Credit: Danilo Valladares/IPS

“On Mar. 25, 1982 they killed my three sisters, my mom, and five brothers who were all kids. First they were questioned by (military officers), who tried to get them to give up the guerrilla members (they were looking for); and when they couldn’t give them what they wanted, they were shot on the spot,” Elena Chávez, a survivor of a 1982 army raid and mass killing in western Guatemala, told IPS.

This Ixil woman has been fighting relentlessly ever since to bring the perpetrators of this massacre committed during Guatemala’s long civil war (1960-1996) to justice.

But she had to wait until this year for the first positive sign, which finally came on Thursday when Judge Patricia Flores issued the order initiating criminal proceedings against Ríos Mott.

For the time being, however, he will be eluding jail, as the judge has allowed the retired general to stand bail. According to the judge’s order, the defendant poses “no obstruction of justice or flight risk, and therefore a 500,000-quetzal bail (about 65,000 dollars) is set and the (defendant) is placed under house arrest with limited movements.”

The decision has upset the victims’ families, who demand that Ríos Montt be jailed immediately.

“We want him in prison, we want to see justice done and the law enforced, because he’s responsible for the human rights abuses committed against my relatives in the massacre at Nebaj, Quiché,” in northwestern Guatemala, Chávez said.

At the hearing, Prosecutor Manuel Vásquez accused Ríos Montt of carrying out the “Victoria 83” and “Firmeza 82” operations, under which the armed forces massacred thousands of indigenous people in Guatemala, in actions that amounted to genocide and crimes against humanity.

The prosecution described how during the dictatorship headed by the now 85-year-old Ríos Montt, at least 1,771 people were killed, 1,485 girls were raped, and 29,000 people were forcibly displaced from their homes.

For these crimes, the Public Prosecutor’s Office asked the judge to initiate criminal proceedings against the retired general.

When the time came for the defendant to speak, Ríos Montt laconically responded that he had “heard and understood the prosecution’s charges, but (preferred) to remain silent.”

While he has repeatedly denied the charges of genocide brought against him, the memories of the tragedy remain vivid in the victims’ minds.

“I was only 11. How could I be the enemy? There was no need to kill women and children to combat the enemy,” Antonio Caba, another Ixil survivor of the Quiché massacre, told IPS.

Caba lost a grandmother and two brothers in 1982 when government security forces razed his village in Quiché, the region most targeted by the army during the war waged against the left-wing guerrillas.

“What we’re asking for is justice, so that this won’t happen ever again, because if these crimes are left unpunished they could be repeated,” said Caba, who hopes to see Ríos Montt in jail soon.

Ninety-three percent of these crimes were perpetrated by members of the armed forces, according to the report issued in 1999 by the independent Historical Clarification Commission set up to investigate abuses committed during the war.

The truth commission was set up as a result of the Peace Accords signed in 1996 between the armed forces and the then-insurgent group Unidad Revolucionaria Nacional Guatemalteca, with the mandate of clarifying “with all objectivity, equity and impartiality the human rights violations and acts of violence that have caused the Guatemalan population to suffer” during the armed conflict that lasted almost 40 years.

The case against Ríos Montt has generated national and international expectations, as he is the first high-ranking military officer to be brought to trial.

Throughout the hearing, he was accompanied by his daughter, Zury Ríos.

“I have faith in justice and the law and I’m here to stand by General Ríos Montt as his daughter and his friend. The prosecution will now have to prove all the charges,” she told IPS.

Outside the courthouse, a large crowd of people carrying placards and photographs of the disappeared followed the hearing closely.

The hearing ended with a smile on Ríos Montt’s face and a bittersweet feeling among the survivors and relatives of the victims.