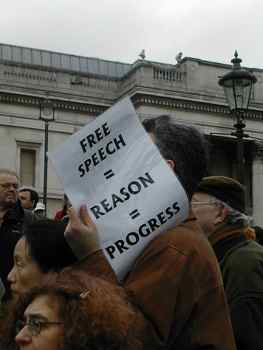 A freedom of speech rally in Trafalgar Square in March 2006 Credit: Simon Gibbs-sjgibbs80/CC-BY-2.0

The regulation, introduced last spring by the Information and Communications Technology Authority (BTK), was due to be implemented in August 2011 but its enactment was postponed until the end of last November following public opposition and pressure by local and international NGOs.

According to the directive, Internet service providers (ISPs) are compelled to offer users two options for filtering their web searches – “children” and “family” – in order to protect them from “objectionable content”.

Such content seems to include “separatist propaganda”, such as communications that appear friendly or sympathetic to the outlawed Kurdish Workers Party (PKK) and other rebel movements.

At present, 138 search terms are deemed harmful to users. These include English words like “sex”, “animal”, “mature”, or “gay”, the German word “verbot”, which means ban, and the Turkish words for “hot”, “mother-in-law”, “sister-in-law”, and “incest”. Even the Arabic-origin first name Haydar (lion), which means penis in Turkish slang, is banned. Access to sites about Darwin and evolution of the species has also been curbed.

The objectivity of BTK has been heavily criticised by human rights activists because it is comprised of representatives of the family and information ministries, which initiated the filtering project, and includes no independent specialists.

According to one of the academics who signed the petition, the filtering database and profiles are controlled and maintained exclusively by the government.

The current version of the regulation grants users the possibility of a “standard” package, which allows them to freely browse all sites. Critics of the measure are, nevertheless, skeptical, as the technical operation of the process remains obscure. Moreover, filtering criteria have been established by BTK without civil society consultation or parliamentary involvement.

Supporters of the restrictions claim they preserves traditional values and are consistent with the Turkish constitution, which “sees protection of the family as one of the fundamental missions of the state,” according to Gunseli Ocakoglu, a journalist close to the government.

But ‘protecting’ families from certain words is only part of the filtering process. Entire sites fall within the scope of the new regulation: MySpace, the video portal Vimeo and certain services provided by Google seem to be on the censors’ list.

In 2011 Blogger.com, which has 600,000 users in Turkey, was banned by a court decision after a local satellite company broadcasting sports features filed a legal complaint on the grounds that some of the site’s users had streamed clips of football matches over the Internet.

In contrast, the European Court of Justice ruled against a similar complaint brought before it by a Belgian manufacturing company last November on the basis that, although protection of intellectual property rights is necessary, filtering Internet access was a violation of fundamental human rights.

The current filtering regulation in Turkey is the sequel to the enactment on May 4, 2007 of Law No. 5651, “Regulation of Publications on the Internet and Suppression of Crimes Committed by means of Such Publication”, by the government of Prime Minister Recep Tayyip Erdogan.

The law was a response to deep concern over defamatory online videos of Mustafa Kemal Atatürk, founder of the Turkish Republic. Over 3,700 Web sites were swiftly blacklisted and access to YouTube was banned between 2008 and 2010.

Law 5651 also paved the way for a new agency, the Telecommunications Communication Presidency (TIB), armed with the power to issue blocking orders for judicial consideration and implement blocking decisions.

Website blocking can also be seen as an offshoot of the Anti-Terror Law 3713 or Article 301 of the Turkish Criminal Code on ‘denigrating Turkishness’, leading human rights activists to claim that Internet filtering goes beyond children and family protection.

Most portals dealing with the troubled southeastern region of Turkey or the online gay community – which has 225,000 netizens – have been blocked, according to an assessment by the Organisation for Security and Cooperation in Europe (OSCE).

In a 2010 report, the OSCE’s representative on freedom of the media argued that the use of blocking orders to silence communication amounts to censorship and is a violation of Article 10 of the European Convention of Human Rights (ECHR), to which Turkey is a signatory.

“The whole thing may be presented as a service to create a more secure Internet, but in reality it (amounts to) downright censorship by the state,” Yaman Akdeniz, law professor at Bilgi University in Istanbul, told the press during the signing of the declaration.

“We are seriously concerned with the filtering packages regulation in Turkey,” Lucie Morillon, head of the new media and Internet freedom desk at Reporters Without Borders (RSF) told IPS over the phone Wednesday.

“(From tests implemented in) Turkey we found that the system put in place by BTK goes beyond filters for child protection to include (online) political opinions about issues sensitive to the government.”

“We are against any Internet access restrictions, no matter where they occur, and have fought attempts of administrative filtering even in France. Our advice to the Turkish authorities has been to abandon the decision,” she added.

Of the nearly 11.5 million Internet users in Turkey, 22,000 have so far opted for a filter package.

Besides Turkey, Internet filtering is widely used by the Chinese, North Korean and Saudi governments, primarily for political reasons.