Brazilian Women Are the World’s Happiest

RIO DE JANEIRO, Mar 8 2012 (IPS) - Money may not buy happiness – but it has helped make women in Brazil become the happiest, most optimistic women in the world, according to a study. 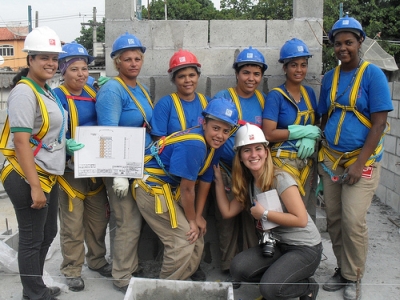 In fact, they are even happier than the men in Brazil, says the report, which attributes this to social and economic policies with a gender focus that have been implemented over the last decade.

The study by the social policies centre of the independent Getulio Vargas Foundation says that on a scale of one to 10, women in Brazil were the happiest women out of a list of 158 countries.

On the survey, which asked respondents to rate their current perception of happiness and their expectations of life satisfaction in 2015, the average rating among Brazilian women was 8.98.

Their male counterparts also headed the global ranking, although they were slightly less happy than the women, with an average rating of 8.56, according to the study “De Volta ao País do Futuro: Projeções, Crise Europeia e a Nova Classe Média Brasileira” (Back to the Country of the Future: Forecasts, European Crisis and the New Middle Class).

The study, published Wednesday Mar. 7, was aimed at assessing Brazil’s future prospects from two angles: one objective, based on the projected performance of economic classes, and another subjective, analysing individual expectations of life satisfaction.

The study, which has a special chapter on women, was released ahead of International Women’s Day, celebrated Thursday Mar. 8, whose theme this year is fighting the feminisation of poverty, among rural women in particular.

Based on data from the Gallup International polling agency, the survey ranked women from Denmark just behind Brazilian women in terms of expectations of future life satisfaction, while the least happy women in the world were in Zimbabwe.

Other Latin American countries on the list were Argentina, which ranked 23rd in terms of future life satisfaction among women, Costa Rica (24th), Honduras (51st), Uruguay (53rd) and Peru (75th).

In terms of present happiness in the year 2011, when the study was carried out, Brazilian women were more satisfied with their lives, with an average rating of 6.73, than men, who rated 6.54.

“Does money bring happiness?” asked the coordinator of the study, economist Marcelo Neri, at the presentation of the results in Rio de Janeiro. “We cannot rule out that aspect,” he said, referring to Brazil’s impressive economic growth over the last decade.

The women respondents were not asked to explain the causes of their happiness, but other chapters of the study, based on objective data, show that economic factors had an influence.

From the start of the government of Luiz Inácio Lula da Silva (January 2003 to January 2011) until late 2011, the first year of the administration of his successor, President Dilma Rousseff, 40 million people were pulled out of poverty and joined the middle class in this country of 198 million people.

And another 13 million will do the same by 2014, according to the data and trends analysed by the study.

From January 2011 to January 2012, poverty declined by 7.9 percent in Brazil – three times the pace needed to cut the poverty rate in half by 2015, from 1990 levels, in order to meet the first of the eight Millennium Development Goals established by the United Nations in 2000.

And although Brazil is still one of the most unequal countries in the world, it has made steady progress in achieving a more just distribution of income over the last 12 years.

On Tuesday Mar. 6, the government reported that GDP grew 2.7 percent last year – a performance that Neri described as “not spectacular, but good,” and attributed to measures adopted to stimulate domestic consumption in the midst of the global economic crisis.

In the nine years that were the focus of the study, the economist also looked at issues strictly involving gender.

In education, for example, the average number of years of schooling among men and women in Brazil grew and the ratio shifted. While in 1992, men had an average of 5.1 years of formal schooling and women 4.91 years, the proportions in 2009 were 7.4 years for women and 7.2 years for men.

“If the future belongs to the educated, and women are the most educated, the future will belong to them,” Neri said.

Women in Brazil have also seen the income gap narrow. In 1992, the average salary earned by men was 62 percent higher than what women earned, but the gap had been reduced to 42 percent by 2009.

But Neri said that although progress was made, “the difference is still large.”

According to statistics taken from six state capitals in Brazil, the average wages of women grew 120 percent between 2003 and 2011, while the average for men increased 95 percent.

“Brazil is designing preferential policies for women within its social policies,” the economist said. “Maybe that’s why they are happier.”

Neri was referring to cash transfer programmes like the Bolsa Familia, which provides a monthly income to poor households, conditional on regular school attendance and health checkups for the children. Ninety-one percent of the heads of households who receive the stipends are women.

On the eve of International Women’s Day, the congressional human rights commission approved a bill that requires equal pay for equal work between men and women. If the law passes, companies that fail to comply will be fined.

Organisations like the Feminist Centre for Studies and Advisory Services (CFEMEA) acknowledge that the 2012-2015 federal budget earmarks greater resources for work, employment and income in areas affected the most by ethnic, racial and gender inequalities.

Nevertheless, the group says the budget “does not have a true gender perspective and does not change the situation of inequality.”

“My daughter is healthy, and I’m working and well-inserted and active in the labour market, which means I am able to enjoy the occasional beer and have a good time,” Brazilian journalist Sonia Toledo responded to a question from IPS. Answering the survey questions, her personal degree of happiness rating was 6.8.

“What am I missing? Financial resources for improving my business, and money for entertainment and culture,” said Suzana Flores, a chef, whose happiness rating was 7.0.

“We need better salaries, greater appreciation of our work, culture, and more respect from men,” said Flores, who is also disappointed that she has been unable to find a partner interested in a serious commitment.

But in general terms, the lack of a romantic partner does not seem to be a reason for unhappiness among women in Brazil or elsewhere.

According to the study, the global tendency shows that single women present an average future happiness rate of 7.28 compared to 6.68 for married women, although the reasons are not specified.

Neri left for last another revealing statistic – one that is negative for “my club,” he joked: the income of women who are on their own, whether single, divorced, widowed or separated, in Brazil is 30 percent higher on average than the income of women in steady relationships.