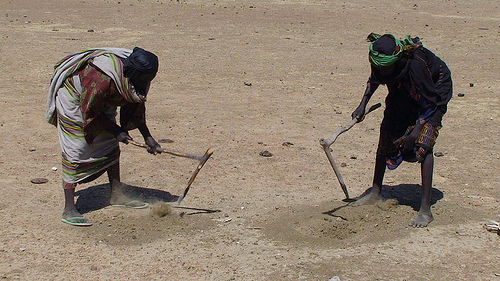 N’DJAMENA, Mar 29 2012 (IPS) - “Only God knows what will happen to me and my children – for two months there’s been nothing to eat. We’re living like beggars,” Henriette Sanglar, a mother of four in the Moursal quarter of the Chadian capital, N’Djamena, told IPS.

“The famine is gaining ground, even here in N’Djamena,” said Diane Nelmall Koïdéré, a nurse at a health centre in Ardepdjoumal, another part of the capital. “Of the 14 children that I saw today, very few weigh what they should at their age. You could see that these children haven’t eaten in the past two weeks. The smallest ones are suffering cruelly from malnutrition.”

One sign of the severity of the famine is that it is hitting hard even in the normally productive agricultural regions in the south of the country. Blandine Karébey moved to the capital from the small village of Bépala to stay with her younger brother, Joseph Ngarmadji.

She doesn’t want to go back to the village, with her two children – aged two and five – even when the rains begin again, because the villagers have completely exhausted their stores of food and have been forced to collect wild fruit and dig up roots that are not eaten in better times.

The effects of the famine have been harshly felt in the area around the capital, considered the country’s breadbasket. But the impact is even worse in the Sahel region, which typically receives less than 300 millimetres of rain per year during a brief three-month rainy season.

As in 2011, when the rains also failed, famine has hit the eastern part of the country particularly hard, devastating communities in the semi-desert regions of Kanem, Guéra and Salamat.

Poor rains have led to poor harvests. In many cases, within three months of bringing in their crop, people had eaten it all, in desperation consuming even the seed set aside to plant in the coming season. To survive, they have either turned to humanitarian organisations for assistance or have flocked to towns and cities where they can find piece-work doing laundry, housekeeping or gardening.

During a recent stop in the capital, Stephen Cockburn, Oxfam International West Africa’s regional coordinator for campaigns and policy, described desperate measures he had seen in the countryside. “In Tassino, a village in the Mangalmé district in the central part of Guéra, women are breaking apart anthills, searching for grain stored there by ants,” he said.

“Women and children are the most vulnerable layer of society. A situation like this, where food shortages lead to prices rising between 100 and 200 percent, has devastating effects and a negative impact on the weakest,” said Marcel Ouattara, a representative of the United Nations Children’s Fund (UNICEF) in Chad.

“The crisis hits families who have limited access to primary health services and who are faced with chronic malnutrition,” he said.

As far back as the beginning of January, the authorities recognised the impending danger, and announced the availability of grain at subsidised prices while simultaneously launching an appeal for assistance from the international community.

The government built up stocks of 4,000 tonnes of grain at the National Office for Food Security (ONASA), a state structure set up to prevent famine.

When the famine disaster was formally declared earlier this year, the price of a 100-kilo sack of grain (maize, millet, sorghum) was around 80 dollars, but ONASA is selling the same cereal crops at the heavily subsidised price of 20 dollars per bag.

However, the people stricken by famine are seeing only limited benefits from this government assistance for two reasons: many simply don’t have the money to buy food, even at the sharply reduced price, and instead wholesalers are seizing the opportunity to build up large stocks of these staples that they can resell at the market price and triple their profits.

The government has mechanisms in place to control prices, but it has not acted against the traders who are gaming the system, and ministers seem content to make warning statements. Analysts criticise the lack of government action, saying it foments corruption.

On Mar. 19, Adoum Djimet, minister for agriculture and irrigation, tried to reassure the public in the face of what he termed “the very negative image given by the international media of the famine affecting parts of the country.”

“The government,” he insisted, “is taking action to rescue our compatriots who are threatened by the famine.”

But in the continued absence of additional assistance announced by the government – which has neither provided details of what is to be done nor explained the delays in taking action – and with humanitarian agencies slow to act, people are left with little more than despair.

An agent for the U.N. World Food Programme, who requested anonymity, told IPS that food supplies were on their way to N’Djamena but were held up at the port of Douala, in Cameroon, which borders Chad to the south.

Several NGOs have expressed concern at the rapid approach of the start of the rainy season, warning that if aid distribution doesn’t begin soon, the worst-affected zones will be made inaccessible as roads become impassable.

“Malnutrition will continue to be rampant as long as an urgent and energetic response is not forthcoming from the government and humanitarian agencies,” said Codjo Edoux, the head of the Médecins Sans Frontières mission in Chad.