PORTO VELHO, Brazil, Mar 9 2012 (IPS) - Trade with the rapidly expanding market in Peru will aid Porto Velho, in northwest Brazil, to cushion the blow of job and business losses in the wake of the construction of two hydroelectric plants on the Madeira river. 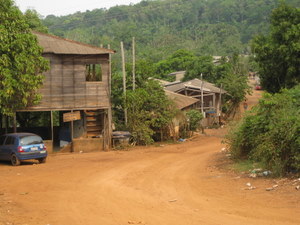 Vila Teotonio, one of the villages flooded by the Santo Antônio hydroelectric plant. Credit: Mario Osava/IPS

Work on the Jirau and Santo Antônio plants was at its height in 2011, when they employed more than 40,000 workers, equivalent to nine percent of the total population of Porto Velho, the capital city of the state of Rondônia.

When the construction work is completed in four years’ time, the workers remaining to operate and manage the plants will be counted in the hundreds, rather than the thousands.

“There will be after-effects,” acknowledged Gilberto Baptista, superintendent of the Rondônia Industrial Federation. Farmers of fresh foods, like vegetables and eggs, will sorely miss the high demand stimulated by the megaprojects, and have no chance of finding alternative markets, he said.

But the local recession will not be characterised by generalised unemployment and bankruptcies, he said.

The surge in construction throughout Brazil, which includes other hydropower projects, will absorb a large proportion of the workforce made redundant in Porto Velho. Locally, a housing boom is under way, and a 975-metre bridge is being built over the Madeira river on the road north, to be followed by another on the road heading southwest towards Peru.

The hydropower companies provided training for workers on a massive scale, which was essential, given the full employment of already skilled labour in other parts of the country, and in addition “the hydroelectric plants strengthened local businesses,” as they drove demand for goods and services in large quantities, with rigid quality standards, Baptista said.

Local businesses have therefore received preparation to compete in more demanding markets, in Brazil or abroad; they have “built up muscle to overcome hurdles,” and have become more competitive, he said. The planned improvement and widening of roads and the Madeira river waterway will also facilitate the movement of local workers.

Peru’s economy is growing faster than Brazil’s, and per capita income is rising, so growing consumption makes it “a promising market,” now that the Inter-Oceanic corridor provides a rapid road connection between Brazil and all of southern Peru, right up to the Pacific, Baptista said.

For example, Rondônia could export meat, milk and dairy products, in exchange for products like onions, asparagus, fruit and temperate climate fish, he said.

Rondônia is not actually close to Peru. It is 880 km by road from Porto Velho to the border, across the Brazilian border state of Acre.

But Baptista said Rondônia will play a leading role in integration with Peru because of its diversified economy, its logistics facilities and connections with northern and south-central Brazil.

He also pointed out that with 1.6 million inhabitants, it has more than double the population of Acre, whose people are poorer, on average.

Bolivia, which does share a lengthy border with Rondônia, offers few business opportunities due to the limited market in the sparsely populated northern part of that country, Baptista said.

In any event, much more than exports will be needed to prevent the decline of Porto Velho. “We expect high unemployment next year,” and a concomitant increase in violence and other social problems, said Pedro Beber, municipal secretary for Special Programmes in Porto Velho.

His secretariat was created in 2007 to monitor and promote the best possible use of the investments that the hydropower plants are compelled by law to make in the city and outlying communities, to mitigate and compensate for the adverse impacts of the construction of the dams.

The social and environmental programmes of the Jirau and Santo Antônio plants total 1.23 billion dollars, but half that amount will go towards the resettlement of nearly 3,000 families whose homes or lands will be flooded by the dams.

“This is not compensation, but part of the normal cost involved in any building work, like the purchase of land to build on or the replacement of a car battery,” said Aluildo Leite, of the state prosecutor’s office, where he coordinates a unit that is monitoring the impact of the hydroelectric dams. The compensation does not remedy the damages, the prosecutor added.

Nevertheless, the balance is positive overall, he said, referring to the construction of 22 health clinics and the renovation of others, as well as new schools, the paving of roads and sanitation works financed by the consortiums that won the concessions to build the Santo Antônio and Jirau dams, located seven and 130 km from Porto Velho, respectively.

The compensation forms part of the requirements set by the environmental authorities as a condition for granting the permits for the construction and operation of the hydroelectric dams.

But “they are not proportional to the damage and the gigantic size of the works,” which attract “violence, drugs and prostitution,” said Miguel de Moura, a priest who works with a Catholic group that aids “poor people who are suffering,” especially in Jacy-Paraná, the town most affected because of its location 90 km from Porto Velho, between the two plants.

The town has suffered the impact of the major infrastructure projects twice over: first from the flood of workers during the peak period of construction of the dams, and later from the loss of those short-term jobs and the rise in unemployment, said Cleiton Silva, president of the Rondônia chapter of the Central Unica dos Travalhadores (CUT), Brazil’s largest trade union confederation.

Moreover, the compensation cannot sustain the sudden prosperity experienced by Porto Velho in the past few years, which was reflected in its fully-booked hotels. Office buildings and even a hospital were converted into hotels to accommodate workers and business visitors.

Economic development will need to be fomented in Rondônia, said Beber, who called for efforts to boost the traditional economic activities of the state, which include agriculture, cattle raising, fish farming and logging.

Beber, an agronomist who specialises in forestry management, also said the extraction of native wood can be carried out in a sustainable fashion, with reforestation projects.

Arguing in favour of measures to give a boost to a diversity of economic activities, he pointed out that soy has become Brazil’s main crop over the last three decades thanks to “easy credit” from the state-run Banco do Brasil, while plantations of genetically improved eucalyptus are “even more profitable than soy.”

The challenge for Porto Velho is to achieve a soft landing when its economy shrinks. Land for the construction of buildings will no longer cost 1,750 dollars per square metre, and the city will no longer lead the nation in per capita sales of motorcycles – which has translated into seven accidents a day with compound fractures, Beber said.