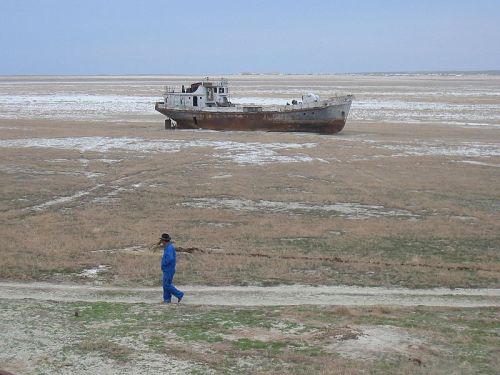 TASHKENT, Mar 22 2012 (IPS) - The saga of the Aral Sea is now a tale of two bodies of water. One holds the promise of a happy ending, the other remains enmeshed in tragedy.

Political geography is a major factor in separating positive and negative. Residents of Kazakhstani settlements along the Aral’s northern shore, including Aralsk, are guardedly optimistic these days. For a couple of generations they watched the Aral steadily shrink and the local economy wither. But recent government rescue measures have stabilised sea levels, helping local fishing communities slowly start to rebound.

Across the salty seabed-cum-desert in Uzbekistan, meanwhile, there is little reason for hope.

In Muynak, another former fishing town, residents are looking for any opportunity to leave. They say they are suffering health problems from dust storms. They also complain that their government is doing nothing to reverse the disaster.

Five decades ago, the Aral Sea was the fourth largest lake in the world. Aralsk and Muynak were thriving fishing towns on its shores. Then, in the 1960s, Soviet authorities diverted the Amu Darya and the Syr Darya, the Aral’s two principal tributaries, to encourage the cultivation of cotton and rice.

By 1990, the Aral Sea had shrunk to one-tenth of its original volume and split into two. Some experts say the Uzbek portion of the Aral will completely dry up soon.

Local communities bore the brunt of what is often called the worst man-made ecological disaster in history. Fish stocks were killed off and local communities lost their livelihoods. Receding waters left behind land encrusted with salt and pesticides.

A public health crisis ensued: the region now suffers from a tuberculosis “epidemic,” according to the United Nations. In addition, infant mortality rates are worse than in South Asia.

Tens of thousands area residents have left the area.

“Every day those who stayed have to cope with sandstorms carrying pesticides and other harmful chemicals,” said a woman from Nukus, an Uzbek town near the Aral Sea, who left 10 years ago because of her worsening health.

After Central Asian states gained independence in 1991, the international community started urging them to take joint action to address the Aral issue. In 1993, the five formed the International Fund for Saving the Aral Sea (IFAS) and pledged to fund a rescue effort.

But since then, they have agreed on little, and the sea has continued to shrink. During his April 2010 visit to Uzbekistan, U.N. Secretary General Ban Ki-moon urged “all the leaders … to sit down together and try to find solutions.”

“Many (Central Asian) officials do not view the problem as a very urgent. …Frictions arising from different national interests have also hampered their efforts to save the sea,” said a Samarkand-based journalist who has covered the disaster for Uzbek state television.

Efforts to solve the Aral conundrum have been entangled in broader problems related to the management of water resources in the region, added the journalist, who spoke on condition of anonymity fearing government retribution.

Uzbekistan seems uninterested in altering the status quo. Little, if any, of the water from the Amu Darya ever reaches the sea; instead, it is siphoned off to feed a diminishing cotton crop, which officials sell on international markets for hard currency.

“The upstream countries (Kyrgyzstan and Tajikistan) have been reluctant to help,” the journalist said. “They believe that Kazakhstan and Uzbekistan must deal with the problem because the lake lies on their territories.”

Kazakhstan’s initiative offer reasons for hope. The Kok-Aral dam – a 64-million-dollar collaboration between the Kazakh government and the World Bank – has trapped water from the Syr Darya in a Kazakh portion of the former sea since 2005.

The project appears to be paying off. As the water levels slowly rise, salinity in the Kazakhstani portion of the sea has decreased by five times and fauna have returned. A few hopeful former residents are now returning to Aralsk and other villages along the shore.

Though critics assert that Kazakhstan has effectively jettisoned large swaths of the former sea to save a small portion, Central Asia-based environmentalists commend the steps and say it is time for Tashkent to make a similar effort.

If one believes Uzbek state-controlled media outlets, the Aral Sea crisis receives ample government attention in Tashkent. A January TV broadcast reported that over the past decade, the Uzbek government has spent close to one billion dollars on saving the Aral and improving living conditions for the region’s residents.

A Tashkent-based environmentalist scoffed at the figure. “Apart from running some public awareness campaigns on the necessity of preserving water, the government is doing nothing substantial,” the environmentalist said.

Some are increasingly concerned that officials in Tashkent welcome the desertification of the area around the Aral. In recent years, the state-controlled gas concern, Uzbekneftegaz, has been prospecting for oil and gas deposits in the Aral Sea bed with Russian and Asian partners.

Adding to environmentalists’ worries, authorities seem to do whatever they can to keep the crisis, as well as the plight of local residents, out of the public eye.

In June 2011, Elena Urlaeva, one of the few human rights activists based in Tashkent, visited Nukus, the largest Uzbek town near the sea. Following her trip, she produced a report describing residents’ rising health problems and criticising government inaction.

That August, Urlaeva said she was beaten by Uzbek police. And, in November, authorities threatened to put Urlaeva into a psychiatric prison – an old Soviet-era tactic to silence dissent. Urlaeva told Uznews.net that she was targeted for criticising the government’s policies in Karakalpakstan.

“How can we solve the problem if we can’t even publicly discuss it?” said the Samarkand journalist.