Mesoamerican Coral Reef on the Way to Becoming a Marine Desert

Rising sea temperatures provoke an increase in “bleaching” or loss of pigmentation in coral reefs.

“This basically means the death of the coral due to the disappearance of the zooxanthellae algae that live in symbiosis with these ecosystems,” expert Juan Carlos Villagrán from the Guatemalan branch of The Nature Conservancy (TNC) told Tierramérica*.

Coral gets its colors from the zooxanthellae that cover the polyps – the tiny individual animals that make up a piece of coral – and produce sugars and amino acids to feed them. In exchange, the algae get a safe place to live with just enough light to grow through photosynthesis.

A colorful piece of coral is an ecosystem made up of thousands of polyps, which create cup-like limestone skeletons around themselves using calcium from seawater. 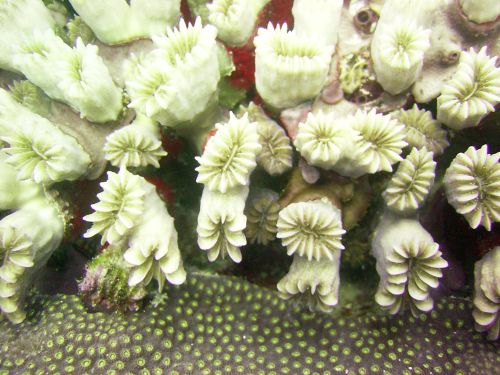 “We are witnessing an accelerated loss of these ecosystems, with serious economic consequences,” said Villagrán, “because they support many species that are important for commercial fisheries, such as lobster, snails, grouper and red snapper.”

The Mesoamerican Barrier Reef System is the longest in the Western hemisphere and the second longest in the world after the Great Barrier Reef of Australia. It stretches more than 1,000 km from the northern tip of Mexico’s Yucatán peninsula down the coasts of Belize and Guatemala to the Bay Islands of Honduras.

The Guatemalan coral reefs of Punta de Manabique and Sarstún, off the Caribbean coast near the border with Honduras, have not escaped the effects of climate change either.

But “in Guatemala, as in many countries in Central America, the issue of marine-coastal areas has historically been given little attention, despite their enormous economic, social and environmental importance,” commented Villagrán.

The 2010 Report Card for the Mesoamerican Reef, prepared by the non-governmental agency Healthy Reefs/Iniciativa de Arrecifes Saludables (HRI), revealed that while six percent of the sampled reef sites were in critical condition in 2008, that figure had jumped to an alarming 31 percent just two years later.

The main threats to the reef include coastal development, tourism, overfishing, rising sea temperatures and hurricanes, the study noted.

The impact of climate change “is beyond the control of our region and is not something we can remedy ourselves,” Mario Díaz, an official from the Ministry of Environment and Natural Resources of Guatemala, told Tierramérica.

Central America contributes less than 0.5 percent of total worldwide emissions of the greenhouse gases that cause global warming, according to the study “Economics of Climate Change in Latin America and the Caribbean 2009”, published by the United Nations Economic Commission for Latin America and the Caribbean (ECLAC). But it is one of the regions most vulnerable to destructive meteorological events.

However, the Mesoamerican Reef countries also scored poorly on an evaluation of measures that they could adopt themselves to protect the reef from climate change and other human activities.

Overall, the efforts of the four countries were given a score of 2.7 points out of five, classified as “fair” in the 2011 Eco Audit of the Mesoamerican Reef Countries, conducted by HRI in collaboration with the World Resources Institute (WRI).

With regard to mapping reefs that are potentially resilient to warming seas, and thus coral bleaching, Mexico, Belize, Guatemala and Honduras received an average score of two points, considered “poor”.

As for engagement in international or regional treaties that support conservation, the four countries averaged a “fair” score of three points.

In Honduras, the impacts of sea warming on coral have become evident in the last 15 years, activist Andrés Alegría of the non-governmental organisation Friends of Roatan Marine Park told Tierramérica.

“The challenge,” he said, “is to ensure that the reefs remain healthy, so that when these large-scale changes occur, they are strong enough to recover.”

In Honduras, coral is an important source of income for two sectors: industrial and artisanal fishing, “which provides food for thousands of people,” and tourism, explained Adrián Oviedo of the Honduras Coral Reef Fund, another non-governmental group.

But climate change is not the only deadly threat to the Mesoamerican Reef.

The HRI Eco Audit determined that the sustainability of the private sector and sanitation and sewage treatment were both areas in which the four countries earned “poor” scores.

Marisol Rueda, the HRI coordinator in Mexico, told Tierramérica that governments must “adopt Class I wastewater management standards, which means fewer pollutants permitted in wastewater flows and adequate infrastructure to treat them.”

In terms of the private sector, Rueda stressed the need for greater participation by the hotel and recreational industries in the adoption of voluntary standards and ecological certification programs.