RIO DE JANEIRO, Mar 30 2012 (IPS) - Outside the Military Club in Rio de Janeiro, where a commemoration of the anniversary of the 1964 coup d’état was being held, hundreds of demonstrators, many of them teenagers, shouted slogans and threw eggs at arriving members in protest. 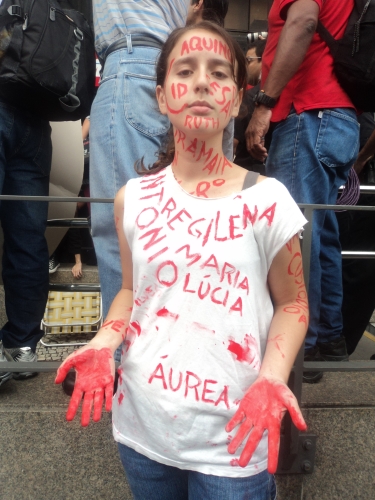 Maria de Aquino Silveira, 19, covered herself with the names of her dead or disappeared relatives. Credit: Fabiana Frayssinet/IPS

Protests are common in other Latin American countries that have suffered dictatorships. But in Brazil this scene signalled the dawn of a mass public reaction, 27 years after the country’s transition to democracy.

On Thursday Mar. 29, at the time set for the demonstration, which was organised over online social networking sites, a single protester could be seen, stoically holding a piece of paper reading “A coup is not a revolution.”

Dozens of journalists, disappointed by the tiny scope of the protest, were preparing to leave, when more protesters began to arrive.

“The dictatorship is over, the torturers must go to jail,” some shouted. “Parasite! Coward!” called others when an elderly retired member of the military, recognised by the crowd as a former torturer, tried to make his way to the entrance of the Military Club.

“We are here for the sake of justice, to end the impunity of military torturers and murderers,” said Tánia Rocha, a former political prisoner and widow of a murdered member of the Communist Party of Brazil (PCB).

An active member of Torture Never Again, one of the organisations calling for those responsible for human rights violations to be brought to justice, Rocha was moved by the size of the protest, which was growing for the first time since the return to democracy.

“I’m enjoying this,” she told IPS, raising her placard with photographs of victims of forced disappearance.

Sixteen-year-old Nando de Oliveira told IPS he was participating in the protest so that “torture may be eliminated forever.”

During the 1964-1985 military dictatorship, more than 475 people were killed or “disappeared”, 50,000 were imprisoned and over 20,000 were tortured. The most powerful woman in the country, President Dilma Rousseff, is herself a torture survivor.

An amnesty law adopted in 1979 prevented bringing those responsible for the abuses to justice.

Rocha attributes the long-delayed social reaction in Brazil to the relatively low number of victims – compared to the thousands killed under dictatorships in countries like Argentina and Chile – and to the amnesty law.

“In spite of that, the dictatorship here was as bloody, murderous and cruel as in other countries,” said Rocha, who was tortured in prison, although “not as much as other comrades, who were mutilated.”

Rousseff imposed a ban on military celebrations of the Mar. 31 anniversary of the coup, for the first time since the return to democracy.

But the armed forces simply held the celebration two days earlier, and carried on with their programme as planned, including a lecture titled “64: a verdade” (1964: The Truth).

Screened by bodyguards, another retired officer managed to get into the Military Club. A poorly aimed egg was enough to get the chanting and shouting going again.

A young man dressed up in a military uniform and a donkey’s head carried a placard reading “Pai! Afasta de mim esse cálice” (Father, take this cup away from me), a line from a famous song against the regime by singer-songwriter Chico Buarque.

Young people’s activism against the crimes of the dictatorship is also found in other states, such as São Paulo in the south, where some young people have started to organise protests aimed at “outing” former torturers.

“Brazil was the first country in the region to have a dictatorship,” another protester, Ana Miranda, of the Coletivo RJ Memória, Verdade e Justiça (Memory, Truth and Justice Collective of Rio de Janeiro), told IPS. “Our impression is that silencing opposition was so strategically important that it was imposed in drastic fashion, until today.”

The silence was so profound that “after all this time, we still carry our fear internalised within us, as if the armed forces still wielded absolute power,” said Miranda.

Perhaps one of the results of this fear is that the Truth Commission, which will begin this year to investigate human rights abuses committed since 1964, does not have the power to bring legal action.

But Miranda believes that even so limited a discussion of the truth is encouraging the movement of victims’ relatives and human rights organisations to take to the streets.

Inside the Military Club, army General Gilberto Serra agreed to an interview with IPS, which took place beside a partition bearing newspaper articles from the time of the coup, called a “revolution” by those who took part.

“They (the protesters) have their own opinions, and they have the right to express them. But I think that back then, they would have had to take responsibility for sending those young men and women to die with the guerrillas,” Serra said.

“They are the guilty ones, not us. Back then we kept a communist government from taking power,” he added. In Serra’s view, the Truth Commission should listen to “all sides,” although he also said that “truth should be left to the historians.”

One of the speakers at the anniversary lecture was General Luiz Eduardo Rocha, notorious for saying that Rousseff should be required to appear before the Truth Commission to testify about her past actions as a guerrilla fighter.

Outside, demonstrators were joined by a former colonel who, years ago, was discharged by the army for condemning the coup. “I’m an army man, but I’m on your side,” he told the crowd.

“I was discharged from the army in 1964 because I opposed the coup, torture, and abuse of power by the military,” 72-year-old retired Colonel Bolívar Meirelles told IPS.

Inside, the officers – elderly and retired, or young and in active service – listened to Rocha as he defined the “revolution” as a “civil-military movement”.

“I see nothing wrong with the Truth Commission, although it’s extremely vindictive and the motive behind it is to provoke unrest in the country at a time of relative calm,” retired General Jonas Correia told IPS.

Sitting between two police patrol cars, a 19-year-old girl wrote in red paint over her clothes and body the names of her family members who were murdered or disappeared during the dictatorship.

Maria de Aquino Silveira grew up listening to the stories of how one of her sisters and some of her uncles, aunts, grandparents, great-uncles and great-aunts were killed in the dictatorship.

“I grew up with internet, and so I learned that there are other people, too, who suffer and have suffered, and the masks begin to fall off. Now the world is larger, and we can see further. And I am no longer the little girl who listened to stories about the family. Now I can see with my own eyes,” she said.