MANILA, Mar 8 2012 (IPS) - As the world commemorates International Women’s Day today, women around the globe are speaking out on various issues that affect them. In light of recent natural disasters and calamities in the Philippines, women are increasingly citing climate change as one of their most pressing concerns. 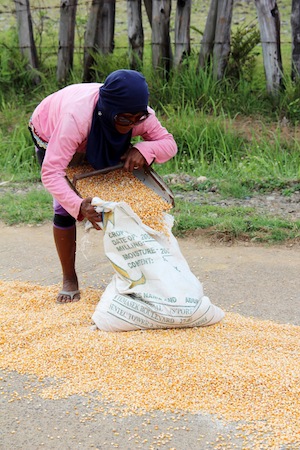 A female farmer in Northern Philippines struggles to gather sufficient yields as a result of climate change. Credit: Kara Santos/IPS

According to the Philippine Commission on Women (PCW)’s executive director Emmeline Versoza, the traditional role played by women makes them one of the most vulnerable populations to climate change.

“During disasters, women attend to the needs of the family and prioritise the safety of family members, especially their children, which makes them more vulnerable,” Versoza told IPS.

The Philippines is one of the most disaster-prone nations in the world, with an average of 20 typhoons hitting the country every year. The United Nations International Strategy for Disaster Reduction reported that in 2011, a total of 33 natural disasters ravaged various parts of the country, resulting in huge losses of life and massive damages to agricultural produce, infrastructure, and properties.

Tropical cyclones, storm surges, heavy rain, floods and landslides are expected to worsen as a result of climate change, putting people, particularly the urban and rural poor at risk, according to Versoza.

Pangging Santos, Advocacy Officer of Sarilaya, a community-based organisation working on women’s issues and the environment, told IPS that female farmers are feeling the impact of climate change most acutely.

“Extreme weather events have really been on the rise, which has affected the farming sector. When yields are low, it’s usually the women farmers who have to find a way to make ends meet,” Santos told IPS.

Irregular rainfall, unexpected droughts and an unusually high incidence of insect infestations have all impacted the agriculture sector, which contributes to a large chunk of the Philippine economy.

Sarilaya works with rural women in Nueva Ecija, an agricultural province in the North dubbed the ‘rice granary’ of the country. Following several killer typhoons that battered the country, thousands of hectares of rice-farming land and corn plantations were destroyed, affecting local women’s livelihood.

“As the men of the farming households sought occupations in the city, it was the women left to tend the fields. As early as six in the morning, they are exposed to extreme heat and harsh weather conditions. Many of the women we’ve worked with are suffering from urinary tract infections and other health problems that often go untreated,” explained Santos.

Meanwhile in urban centres, flashfloods brought by intense rains over the past few years regularly displace thousands of people into cramped evacuation centers, where women and girls face further risks.

At the height of the killer typhoon Ketsana in 2009, Maritess Gural gave birth to her sixth child inside a basketball court, which had been converted into a makeshift evacuation centre. Hours before going into labor, she had been wading in murky floodwaters to save what she could of her family’s belongings.

“Fear was the farthest thing from my mind. I told my husband I couldn’t leave until I had salvaged our belongings,” recounts Gural in the documentary “A Woman’s Story” produced by UNFPA.

According to UNFPA added that the risk of sexual violence is also high in emergency situations when “protection mechanisms are absent.”

“There have been reported cases during natural disaster of gender-based violence because of the open living conditions in evacuation centers. Women’s special needs – such as safety, privacy, separate toilets and gender-sensitive hygiene kits should be taken into consideration by local government during disaster-planning,” said Versoza.

In light of the global impact of climate change, PCW highlighted the importance of governance and accountability in their month-long celebration of National Women’s Month. The theme “Women Weathering Climate Change” highlighted that disaster risk reduction is everyone’s responsibility and underscored women’s role as agents of change.

“We want women and local governments to be more informed and prepared for any disaster – because climate change is here. We will be visited by many more typhoons in the years to come and we have to be prepared,” said Versoza.

Government agencies and women’s community groups gathered in a tree-planting activity to help reforest Marikina watershed, the source of most of the flood waters that inundated Metro Manila during the height of tropical storm Ketsana.

“Women are very active at the village level and they are the ones mobilising the community to help rehabilitate the watershed and take care of the nursery,” said Versoza.

Groups like Sarilaya are also working with women famers to mitigate climate change.

“We’re training women to practice organic farming. We’ve set up a sustainable farm school and established the use of organic (and) traditional rice and vegetable seed banks,” said Santos.

Meanwhile, other local governments are stepping up efforts to address climate change.

Late last year, the province of Albay, which is located right in the path of tropical cyclones coming into the country from the Pacific Ocean, set up the country’s first Climate Change Academy.