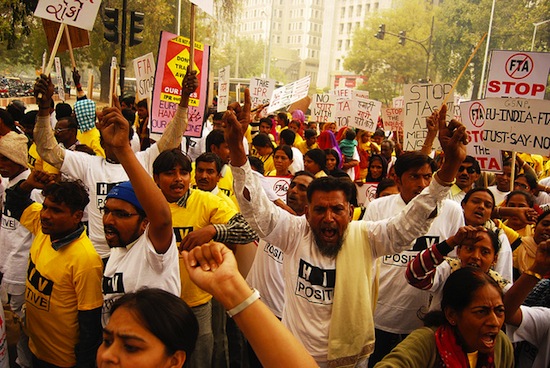 U.S. proposals for intellectual property rights in the TPPA could spell disaster for HIV/AIDS positive people who rely on the generic drug market Credit: Mudit Mathur/IPS

SYDNEY, Mar 9 2012 (IPS) - The 11th round of the Trans-Pacific Partnership Agreement (TPPA) talks concluded in Melbourne Friday, with member states suggesting the negotiations had made significant progress but civil society groups reiterating concerns that the United States’ corporate demands could undermine social, economic and environmental policies.

“We do know that global corporations are pushing hard for the inclusion of provisions that benefit companies, but not necessarily workers and communities,” Gerardine Kearney, President of the Australian Council of Trade Unions (ACTU), told IPS.

“This can be seen, for example, in the negotiations on intellectual property and the risk that it (poses) to pharmaceutical companies’ rights to charge higher prices for medicines. We are seeing it in the investment negotiations, where (corporate success) will undermine the right of governments to regulate in the public interest and will provide companies the right to sue governments for damages,” Kearney said.

The TPPA is currently being negotiated between the U.S., Australia, New Zealand, Singapore, Malaysia, Vietnam, Brunei, Chile and Peru with the goal of developing a comprehensive “21st century” regional trade agreement by the year-end.

Australia’s lead negotiator Hamish McCormick told reporters in Melbourne, “We have made further strong headway. We are looking to conclude this year but we want to have a high quality agreement.”

The TPPA builds on the Trans-Pacific Strategic Economic Partnership Agreement between Brunei, Chile, New Zealand and Singapore, which entered into force in 2006.

It is intended that the TPPA remains relevant to emerging issues and allows for membership expansion; already Japan, Canada and Mexico have formally expressed interest in joining the negotiations.

The TPP countries have a combined population of 505.8 million, according to 2010 statistics, with a gross domestic product of 16,968 trillion dollars.

The next round of negotiations are scheduled for May and observers speculate they could be held in the U.S.


Businesses say that diversifying trade flows across the Pacific would be beneficial, but civil society groups, calling for strong labour rights and environmental protections in the trade deal, have raised concerns over investor state dispute settlement (ISDS) provisions, amongst others.

ISDS provisions allow foreign corporations to sue a government for regulatory actions. The Australian Labor Government has made it clear that it does not support the inclusion of ISDS clauses despite immense pressure from corporations and the U.S. government.

“ISDS provisions can constrain the ability of governments to introduce legislation on social, environmental and economic matters; confer greater legal rights for foreign businesses than those available to domestic businesses by providing an avenue to take legal action for alleged breaches of the investment chapter of the trade agreement; and ISDS arbitration is lengthy and costly,” Kearney said.

The Philip Morris case against the Australian government’s legislation on plain packaging of cigarettes is an example of this.

“Taking on the Philip Morris challenge to this legislation has made Australia a global champion for the cause of public health over commercial interests, but U.S. demands (on) the TPPA would roll all that back,” Patricia Ranald, convenor of the Australian Fair Trade and Investment Network (AFTINET), told IPS.

Civil society groups, academics and trade unions have also expressed concerns about the U.S. proposal that corporations be empowered to sue governments over broad social, economic and environmental policies.

“A number of the demands made by U.S. multinational corporations (MNCs) in submissions on the TPPA have become official U.S. government positions in the negotiations. For the U.S., it seems a zero-sum game between their MNCs and the rest of the world – either they win large, or nobody wins at all,” Sanya Reid Smith, legal advisor and senior researcher at Third World Network, told IPS.

Another key concern for the U.S. is intellectual property (IP) rights on medical technology, which health groups feel would restrict access to affordable medicines and would spell the end of the Pharmaceutical Benefits Scheme (PBS) in Australia and similar schemes in other countries.

“If U.S. proposals for intellectual property and pharmaceuticals in the TPPA were accepted by other countries, we would see significant reductions in access to affordable generic medicines in Australia and the region. Developing countries would be hit particularly hard because they are very reliant on life- saving generic medicines to treat conditions like HIV/AIDS and non-communicable diseases,” Deborah Gleeson, spokesperson for the Public Health Association of Australia, told IPS.

The Australian government has reiterated its policy that it won’t accept provisions in the TPP that would undermine the integrity of the country’s PBS.

Doctors Without Borders (known by its French acronym MSF) has also expressed profound concern over the impact this agreement would have upon their health programmes.

Over 80 percent of all medicines used by MSF are generic and MSF has warned that losing access to this source of medicine will result in literally millions of deaths.

Another sticking point in the negotiations has been over the issue of capital controls. Under the proposed deal, nations would not be permitted to regulate speculative capital flows to protect their economies from financial crises.

“At a time when the world is still recovering from a crisis caused largely by poorly regulated financial activities, it is critical that trade negotiators allow governments the full range of policy tools to promote financial stability, including capital controls. There is strong economic evidence that capital controls can be used to prevent financial crisis,” Sarah Anderson, global economy project director at the Institute for Policy Studies in Washington D.C, told IPS, citing the example of Malaysia imposing controls on capital outflows at the height of the Asian financial crisis in 1998.

Prior to the final round of negotiations, Anderson, along with over 100 economists sent a letter to trade ministers urging TPPA negotiators to promote global financial stability by allowing the use of capital controls.

Eight of the nine countries, with the exception of the U.S., negotiating the TPPA are net IP-importing countries.

In February 2011, a draft U.S. proposal for the IP chapter of the TPPA was leaked to the public. As Ranald said, “Broader copyright and intellectual property rights demands by the U.S. would lock up the Internet, stifle research and increase education costs, by extending existing generous copyright from 70 years to 120 years, and even making it a criminal offense to temporarily store files on a computer without authorisation. The U.S., as a net exporter of digital information, would be the only party to benefit from this.”

Over 500 negotiators were in Melbourne from Mar. 1-9, along with civil society groups campaigning for negotiating texts to be released for public and parliamentary debate before the pact is signed.

As Lori Wallach, director of Public Citizen’s Global Trade Watch, a prominent U.S. consumer organisation, told IPS, “The reason these negotiations are so extremely secret and there is such a rush to get it (done) quickly is that the content is so extremely biased towards increasing corporate power at the expense of most of us. There are so many outrageous specific proposals that if people knew the details then the whole process would get derailed by wide-spread outrage.”